AROUND town looking back

By TheCatoctinBanner.com On July 1, 2015 · Add Comment · In Local Events

Rain couldn’t stop the annual Emmitsburg Community Heritage Day. With the exception of the Vigilant Hose Company’s Community Breakfast that was held Saturday morning, it just delayed the event for a day.

The Emmitsburg Lions Club, which hosts the event, made the decision to postpone the festival. Community Heritage Day is typically on the last Saturday in June, but this year it ran on Sunday, June 28. It turned out to be a good call, because it rained pretty much all of Saturday. Sunday, on the other hand, began cloudy and wet, but with no rain. By noon, the sun forced its way through the clouds and brightened the day.

Carina Hall of Emmitsburg brought her two sons and nephew out to participate in the games that included a greased pig chase, egg toss, three-legged race, and more.

“I like to come because the kids get to have a good time,” Hall said.

Besides the games, she also enjoyed some of the other events that are part of Community Heritage Day, such as the live music, parade, classic car show, and, of course, the fireworks.

“I think what the boys enjoyed even more than the games was the (caterpillar) train that went around the park,” Hall said.

Not only did kids enjoy the games, but so did the young at heart. Thirty-one-year-old Justin Forsyth signed up to participate in the adult heat of the greased pig chase on a dare.

“I told him (Bob Hance) that if he signed me up, I’d be guaranteed to win,” Forsyth said.

Although it was his first time trying to catch a greased pig, his confidence wasn’t misplaced. He said that once the pig started running, his old football skills kicked in to help him catch a real pig skin.

“It was fun, and I’m going to come back to defend my title next year,” Forsyth said.

After the games, visitors strolled Community Park listening to music and eating delicious food. They also took a wagon ride over to the classic car and motorcycle show.

Ron and Cindy Welch of Orlando, Florida, were in town visiting family and stopped by to watch the events.

“It’s very nice,” Sandy Welch said. “I like that everyone is involved and participating.”

This year was the 33rd Annual Community Heritage Day. Each year, the event brings the community together, celebrates Emmitsburg’s history, and raises funds for local charities.

Sponsors of the day include the Emmitsburg Lions Club, the Emmitsburg Business and Professional Association, Sons of the American Legion, Knights of Columbus, AMVETS, Tyrian Lodge #205, the Emmitsburg Veterinary Hospital, and Men’s Auxiliary VFW, and many more who contribute funds for the annual fireworks and who volunteer to make the event possible.

Winners in this year’s events were as follows:

“Eventhough it was a small turnout, it was a really nice show,” said Lions Club Coordinator Melissa Wetzel. Trophies were awarded according to people’s choice. 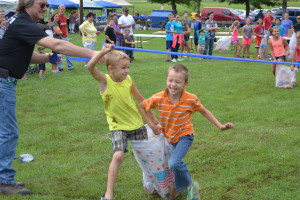 (left) Evan and Robert Upchurch place first in the sack race, just one of the many fun contests held during Community Heritage Day.

(below) The annual car show at the Emmitsburg Community Heritage Day is always a favorite. 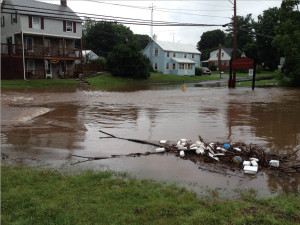 Flooding shown in Emmitsburg from the heavy rains that swept through the area on Saturday, June 27, causing Emmitsburg Community Heritage Day to be delayed until Sunday.

(below) Participants strive for a steady, soft grip during the egg toss contest. 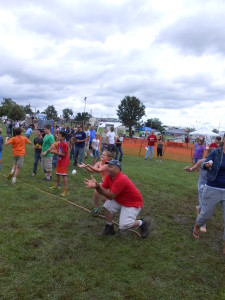 Josh Maze and Mason Joy hold up their ribbons earned during the sack race competition. (left)

Tug-o-war games were held for all ages at Community Heritage Day. Lion Jim Hahn helps get the contest started.

No slouches present during this sack race competition, only determined and energetic participants.

(left) John Lane and Krystal Lane place first and second in the pie eating contest, where winning tastes so good. 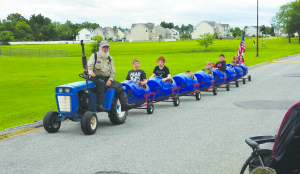 Kids enjoy riding on the train around Emmitsburg Community Park.