Sterling Galt purchased the Emmitsburg Chronicle in 1906. He was the fourth owner of the 27-year-old newspaper. Back in those days, small newspapers had few employees. The owner was the publisher and the primary reporter.

The debut editorial stated the goal of the newspaper as this: “Our first aim shall be to present the CHRONICLE as a medium through which the outer world may learn our aims, our hopes and high resolves. We shall not try to amuse our readers with rhetorical flourishes, nor with sonorous sentences, neither shall we indulge in meaningless jests, nor silly observations, but endeavor, in an unpretending way to give our readers the current news of the times, with such items of local interest that may present themselves: we shall try to practice the recent suggestion of an esteemed clerical friend, who we estimate as a model editor, substantially, that ‘the value of a newspaper consists not so much in what we put into it, as in what is kept out of it.’”

Galt worked hard living up to the dream of what the newspaper could be. He reported on community events and big stories, such as the murder of Edward Smith by Fred Debold. Although it didn’t happen in town, it was a big enough story that Galt put out a special issue on August 9, 1906.

Galt had his own plans for his future, though. As editor of the newspaper, he had become a leading member of the Emmitsburg community. He saw its strengths and problems, and he started to think he had solutions rather than simply reporting on what other people came up with. By reporting on other communities, he had a good feel for what issues were on the minds of their residents.

When readers picked up the October 27, 1911, issue of The Weekly Chronicle, they read a letter from Galt to his readers: “Having accepted the nomination by the Democratic party of the State Senatorship of Frederick county, I feel that the due observance of a practice, entirely ethical in its character, constrains me to withdraw from the active management and editorship of The Weekly Chronicle during the active campaign.”

He stepped back from his job to try and avoid the impression of bias. If that was the intent, it didn’t work.

During Galt’s absence, E. L. Higbee, a man Galt said had “long been associated with me,” was given management and editorial control. However, Galt still owned the newspaper. As someone Galt trusted, it wasn’t surprising that Higbee backed Galt, and the newspaper showed it.

The next issues of the paper focused heavily on Galt and his candidacy. Even that first issue, where Galt announced he was stepping down from running the newspaper, featured support for Galt’s candidacy.

Of his own candidacy Galt wrote, “If I am sent to Annapolis I shall go there untrammeled, uncoerced—not the tool of a boss or an organization or the vassal or representative of any league, clique, society, union, association, corporation or combination of interests, and I shall endeavor at all times and under all conditions to serve the PEOPLE as justice, honor and duty point the way.”

The election drew a lot of voters to the polls. Emmitsburg had more than 700 registered voters and 632 voted in that election. It took poll workers in the district until 4:00 a.m. the following morning to finish counting the votes.

The heavy positive coverage given Galt in The Weekly Chronicle wasn’t enough. He received 4,813 votes, but his opponent, John P. T. Mathias of Thurmont, was the incumbent, garnering 5,290 votes.

Following his loss, Galt resumed his duties as editor and went back to trying to help the community.

Galt died on December 28, 1922. Under his editorship, The Weekly Chronicle was considered one of the best weekly newspapers in the state, according to editorials in other newspapers. 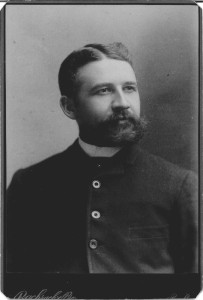