Welcome to Cantori’s Theatre of Magic

Emmitsburg now has a new place to visit where you can watch a magic show or buy a book. Magician Michael Cantori has opened Cantori’s Theatre of Magic at 24 West Main Street in Emmitsburg.

“We’re going to have a performing space for parlor magic shows, which are smaller shows for groups smaller than thirty people. People used to hold small shows in their parlors for their friends and acquaintances,” Cantori said. He believes that these smaller shows are more interactive.

Cantori envisions the store being an after-dinner destination for people eating at one of Emmitsburg’s restaurants, and also hopes to attract visitors from Gettysburg and Ski Liberty.

Cantori will also have a used bookstore sharing the space with the performance area. “It is a general-use bookstore with material that focuses on magic, philosophy, mythology, literature, and local interest,” he said.

In addition, Cantori will also offer instruction in magic and illusion, although the store will not be selling magic tricks. “We’ll have more of a focus on the art of magic and develop the needed skills sets to perform tricks.” He explained that he could do an hour show with just card tricks, and it is those sleight-of-hand skills that new magicians need to develop first as they learn to perform tricks.

The combination of magic theatre and used bookstore may seem unusual, but it is a combination that Cantori embodies. Not only is he a master illusionist, but he has owned used bookstores in the past. He sees the store as something that will anchor him more in the community so that he won’t have to travel as much for his performances.

“It is fulfilling to become an active part of the community,” expressed Cantori.

Store hours are limited right now. As the store finds its audience and the need for shows grow, so will the store hours.

You can find out more about the store at www.illusionplace.com and you can call the store at 301-447-3400 to find out the current store hours. 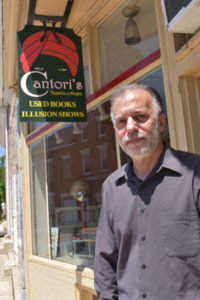 Michael Cantori, owner of Cantori’s Theatre of Magic in Emmitsburg.