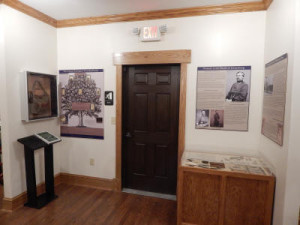 As the Confederate Army retreated from Gettysburg on July 4, 1863, they encountered Union troops in the area of Blue Ridge Summit. A two-day battle ensued in the middle of a thunderstorm that eventually spilled over the Mason-Dixon Line into Maryland.

“It is the only battle fought on both sides of the Mason-Dixon Line,” said John Miller, Director of the Monterey Pass Battlefield Museum in Blue Ridge Summit.

While lots of books, movies, and stories have focused on the importance of the three-day Battle of Gettysburg, little light has been shed on how the Confederate Army made its retreat south from the battlefield through enemy troops with weary men. The Battle of Monterey Pass involved about 4,500 men with 1,300 of them winding up as Union prisoners and 43 soldiers being killed, wounded, or missing. Major Charles K. Capehart of the 1st West Virginia also earned his Medal of Honor during the battle.

Through the efforts of Miller and other volunteers and supporters, Blue Ridge Summit has a small museum and a growing area of protected land dedicated to educating the public about the battlefield.

The museum opened last October on 1.25 acres along Route 16 in Blue Ridge Summit. The Monterey Pass Battlefield Museum displays a collection of artifacts related to the Battle of Monterey Pass. It has galleries that look at different aspects of the battle, such as the overall Confederate invasion of Pennsylvania and Washington Township at the time of the battle. Outside the museum is a marker erected by the State of Michigan commemorating the participation of Michigan troops in the battle.

“It is one of only five such markers outside of the state of Michigan,” Miller said.

Most of the uniforms, weapons, pictures, and other artifacts were donated to the museum, and the attractive building was built through the hard work of volunteers.

“The purpose of the museum is to educate people about the battle,” Miller said, “but it also can set a standard for other community organizations along the retreat route that want to see how they can do it.”

Places like Hagerstown and Falling Waters are among the towns looking at doing something similar in their communities.

Although the museum wasn’t open in time to catch a lot of the tourist traffic in 2014, more than 300 did visit.

“It’s been slow at first, but the number of visitors will grow as more people learn about it,” said Miller.

The Friends of Monterey Pass have been working with tourism councils in the surrounding counties to tie the museum into the counties’ Civil War tourism plans.

When it reopens in April, the Friends of Monterey Pass hope to add 116 acres of land over which the battle was fought to the museum. Miller said that before the museum reopens for 2015, he hopes to have some additional displays in the museum as well as some interpretive panels for a driving tour of the new piece of land.