Gerrie Inducted into the YMCA Sports Hall of Fame 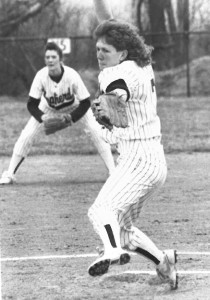 When Kim Wivell Gerrie was a young girl, she would watch her father when he played softball with different Thurmont-area teams.

“I wanted to step out on the field with him,” Gerrie said.

Gerrie went on to become quite the athlete. She played softball and ran track and field while attending Thurmont Middle School. Then, while in Catoctin High School, she played softball, soccer, and basketball. During her senior year, the softball team had a record of 21-1, losing only in the state championship game.

She graduated in 1990 and went on to Shepherd University to play softball. Although her team had a different coach each year, they still managed to have a winning record each year.

And, now, she will be inducted into the YMCA of Frederick County Alvin G. Quinn Sports Hall of Fame on February 7, 2015. She is one of eight inductees this year.

Her bio for the Hall of Fame reads:

Kim Wivell Gerrie has set softball records at every level she has played. A versatile athlete during her middle school years with blue ribbons in several track events, it was softball where Kim excelled the most. She was a member of the Little League All-Stars that played in the Maryland State Tournament. At Catoctin High she participated on the varsity soccer team for four years, played basketball all four years, and was truly outstanding in her four varsity years playing softball. She was a first team MVAL selection, starting in her sophomore year and repeated every year afterwards. In her senior year she was All-Area Player of the Year. She went on to a record-setting career at Shepherd University, where she was inducted into the SU Hall of Fame in 2007. She still holds five Shepherd pitching records.

“When I walked into the room (the Hall of Fame), it was very humbling to see all of those athletes and coaches on the wall,” Gerrie said.

The induction banquet will be held at the Walkersville Fire Hall this month. This will be the 39th annual induction ceremony.