From November 16 to November 21, 1953, the fire sirens went off a lot more often than usual around Thurmont, and people took particular note of where they were when they heard the sirens.

It wasn’t that there was a rash of fires in Thurmont. Guardian Hose Company just wanted to see which of the two sirens they had could be heard the furthest away from town.

The officers of the Guardian Hose Company had asked that citizens listen for the sirens and call in their location to the company.

The fire company had installed the new siren in October of 1953 but hadn’t taken time to test it against their old siren. The test was to sound each siren at noon during the test week and see which one could be heard furthest away.

Since the siren alerted the firefighters that they needed to report to the station, the further away it could be heard, the more firefighters could potentially hear it.

In December, “D. Sayler Weybright reported that the new siren given to the company by Civil Defense officials was the loudest and could be heard the furthest, will be used at all times,” according to the newspaper.

The new siren was used in the relatively new Guardian Hose Company fire station. Guardian Hose Company had the old town hall on North Church Street razed in 1950. Then a new building was constructed on the site that was large enough for four firefighting vehicles, a meeting room, a furnace room, and a storage area. The cost at the time for the new station was $38,000 (about $375,000 today). It was funded through bonds from the Thurmont Bank.

The cornerstone for the building was laid on July 4, 1950. It was a big event in Thurmont that drew a large crowd.

Even with a loud siren, someone still needed to sound it. That job usually fell to one of the firefighters who worked closest to the station. When Wayne Stackhouse joined Guardian Hose Company in 1969, that job fell to the chief.

“The chief was a local barber named Harry Miller,” Stackhouse said in an interview last year. “The call would come into his shop, which was close to that station. He’d come in and set off the siren.”

Guardian is still protecting the community from its station on North Church Street, though it has been redone to fit more equipment that is larger. It also has more space for the firefighters. When there’s a fire, a lot of calls go out to pagers and cell phones and the siren still sounds. 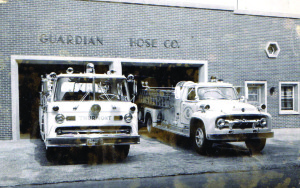