By TheCatoctinBanner.com On December 30, 2015 · Add Comment · In Business News

The Emmitsburg Tattoo Company is somewhat of an anomaly, insofar as tattoo shops are concerned.

In terms of appearance, the storefront is clean, sleek, and inviting—an image that is supported by the shop atmosphere itself.

While the inside of the shop is decorated with many items and images that befit any reputable tattoo shop, the walls are also adorned by police and military stickers and memorabilia. A large section of the wall is covered in fliers and business cards of local businesses, and a hefty plastic jar sits on the counter for donations to local charities.

As soon as you meet co-owner and tattooer Don Sonn, you understand why the Emmitsburg Tattoo Company is the way it is. As tattooers go, Sonn is a little bit of an anomaly, too.

Before getting into tattooing in 2003, Sonn worked full-time writing computer code. However, the tattoo shop held more appeal for Sonn than a desk job ever could.

“As I started getting more heavily tattooed and hanging out in tattoo shops, I felt like I belonged there, and I never really felt that in an office setting,” said Sonn.

Sonn apprenticed at Baltimore Street Tattoo in Hanover, Pennsylvania, until 2007, and worked in Gettysburg until he opened Emmitsburg Street Tattoo with his wife, Brandy Malocha, on November 5, 2015.

In addition to their appreciation of tattooing, both Sonn and Malocha are strong supporters of the community and its first responders. Malocha is a full-time police officer herself with the Montgomery County Police Department.

“We are pro-police, pro-military, pro-community, and pro-hang-out-and-have-a-good-time,” said Sonn. “We love to draw, play guitar, and hang out and have a good time with folks. I love the social aspect of the business.”

In a business where speed and money tend to overplay the social and ethical factors, Sonn and Malocha have created a shop that defies the trends.

“We want to create a comfortable, cool environment, with solid, quality tattoos, and a business with some ethics to it,” said Sonn. “We welcome anybody who wants to come and hang out—it doesn’t have to be just about the tattoos.”

Since the shop’s opening, Sonn and Malocha have actively supported the community through donations and social events. Emmitsburg Tattoo Company has donated funds to the volunteer fire department, animal shelter, and, most recently, the Emmitsburg Council of Churches’ Fire Relief Fund.

As for the social events, the Emmitsburg Tattoo Company recently held their first acoustic guitar night, and they are planning on hosting a kids coloring night in January 2016.

This is why the Emmitsburg Tattoo Company is such a unique tattoo shop. For Sonn, tattooing is not just a job, it’s a chance to build a community of friends and get the most out of life.

“I’m not a big superstar, rock star tattooer, and I likely never will be,” said Sonn, “But that’s not why I’m here; that’s not my pursuit. I have always tried to be the most well-rounded tattooer and create a setting where people can sit and hang out and have fun. This is the coolest thing in the world, and we just want to have some fun and involve people in the community as much as possible.”

The Emmitsburg Tattoo Company is located at 2 W. Main Street in Emmitsburg. To contact, email emmitsburgtattoocompany@gmail.com or call 301-447-6837. 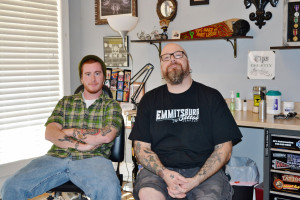 Don Sonn (right) and apprentice Mark Coscia (left) are the everyday faces of Emmitsburg Tattoo Company. Sonn has been in the tattoo business since 2003.