By TheCatoctinBanner.com On December 30, 2015 · Add Comment · In Community News

“The Twelve Days of Christmas” – Emmitsburg, 2015: Tuesday morning, December 1, was heralded in by the gentle innocent voices of Mother Seton third graders, singing Christmas carols as they proceeded up East Main Street to the Square. Under umbrellas, all with decorations in tote to adorn the town Christmas tree. The school is about a quarter of a mile away. There, the special season has begun.

Wednesday afternoon-evening, December 2, more gentle, innocent voices were heard. This time, those of the victims of the fire on South Seton Avenue. With the Red Cross and community fire fund team members, I worked with the victims with regard to their housing, clothing, and food needs.

Friday evening, December 4, the town hosted eighty guests at the Carriage House Inn for the County Chapter of the Maryland Municipal League for the annual delegation dinner. The theme of the evening for the leaders from across the county was not to just serve on the current electorate but also the “electorates of the future.” Mother Seton School chorale started the evening singing Christmas carols, which quickly had everyone joining in. Then Ed and Mary Lynn Hinde of SHIP, the Student Homelessness Initiative Program, introduced their program to assembled municipal, county, state leaders. Over eight hundred county children are classified as homeless, of which over eighty are in the Catoctin High School District. The town, churches, and service groups have been working with SHIP since last May. Sheriff Deputy Ben Whitehouse was later honored with a standing ovation for his service in assisting an invalid person escape the fire. Pastor Jon Greenstone gave the blessing before dinner. Familiar “Change for Food” canisters adorned the room, as those who rely on our food bank are also a part of future electorates.

Monday morning, December 7: Over the police monitor came the announcement that there was a fire on West Main Street. Once again, I went to the scene to assist any possible displaced fire victims. This time there were not any, but all of the residents were injured by the smoke and fire. One was lost at the scene, while the other two were sent to different special trauma centers. Neighboring fire companies responded to assist our Vigilant Hose Company. To the rear of the fire-consumed home, three firefighters assisted a victim out of the fire, while three firefighters administered CPR to the victim. Out front, three firefighters gave CPR to another victim, while firefighters worked around them tending to the fire.

Monday evening, December 7, residents assembled at the square for the annual tree lighting ceremony. This time, there were no appearances of the Mother Seton and Christ Community Church chorales or a visit from Santa. We observed a moment of silence, and Pastor John Talcott led us in the Lord’s Prayer. From those assembled, a child chosen from the crowd lit the tree.

Tuesday evening, December 8, Roger Wilson, Director of Government Affairs for the County, and I went to a regularly scheduled meeting at the firehouse to thank the members for their service during the span of less than one week.

Wednesday, December 9, a second victim from the fire on West Main Street passed away.

Thursday and Friday, December 10 and 11: We worked on sourcing money for the funeral of Ms. Meyer. From everywhere, donations were asked for and received. The town staff, businesses, individuals, Lions Club, EBPA, Vigilant Hose Fire Co., and the Mount have donated.

Though not like “The Twelve Day of Christmas” song I remember, but because the community’s response to the fire victims’ suffering and the families was so caring and giving, the elicited feelings were the same. We have a wonderful community. Pray for the victims. I hope everyone had a Merry Christmas.

Pastor Jon Greenstone is helping coordinate the efforts of the Emmitsburg Council of Churches’ efforts to raise funds for the families displaced by two December fires in Emmitsburg. The funds will also help the businesses affected by the fires. Both the Seton Center and Council of Churches are accepting donations. The Seton Center is working to help the families find long-term housing and to replace their belongings lost in the fire.

Members of Vigilant Hose Company, the American Red Cross, first responders, and safety advocates began going door to door to Emmitsburg residents to talk about the importance of having working smoke alarms in their homes and businesses. They will also install free smoke alarms when requested. The effort began on December 12. For more information, call Vigilant Hose Company at 301-447-2728.

Zenas Sykes was appointed to the Citizens Advisory Committee on December 7 by the Emmitsburg Town Commissioners. The vote was 4-0. Commissioner Joe Ritz was not in attendance.

The Emmitsburg Town Council approved draft changes to a town ordinance that will reduce the yard setbacks from properties in the Village and R-1 zones, whose lots are less than thirty feet in width. If approved, the setback will be reduced from six feet to three feet. The draft ordinances will be sent to the Planning Commission for its input before being voted on by the town commissioners.

For more information on the Town of Emmitsburg, visit www.emmitsburgmd.gov or call 301-600-6300.

Alcohol May be Consumed on Some Town Properties

The Thurmont Town Commissioners and Mayor John Kinnaird voted on December 7 to approve amending the town code to allow beer and wine to be served at events on properties under long-term lease from the town.

Currently, the properties that this policy would affect are the Main Street Center, Thurmont Senior Center, and Thurmont Food Bank.

Kinnaird had presented the council with three different policies, and the commissioners selected the least-restrictive one, although it is not without restrictions. The new policy only allows for beer and wine to be served, and it can only be served at specific events. The organization sponsoring the event must have sufficient liability insurance. The beer and wine must be served free (otherwise a liquor license would be required) and attendees cannot bring their own alcohol.

The commissioners noted that consuming alcohol in town parks is still specifically prohibited.

The policy will be reviewed by the town attorney, and then town officials will have to ask the lease holders to amend their current leases. If they do not agree, the next time their lease is up, it will be revised with the new policy.

On January 16, there will be a bulk pickup with a limit of two bulk items. If you have more items, you will need to have a special tag on the item that can be purchased from the town office for $10.00.

An electric circuit in the Criswell Chevrolet parking lot will be moved by AUI Power. AUI Power will also finish needed construction when the circuit is moved.

The Thurmont Commissioners and Mayor John Kinnaird agreed to pay one-third of the $47,450 cost or $15,900. Criswell Chevrolet will pay the remaining cost.

The cost is being shared because it benefits both the town and Criswell Chevrolet, according to Chief Administrative Officer James Humerick. Criswell needs the circuit moved in order to expand.

View the Town of Thurmont’s website at www.thurmont.com or call the town office at 301-271-7313 for more information.

The 2015 Winner of The Catoctin Banner’s Holiday Home Decorating Contest: 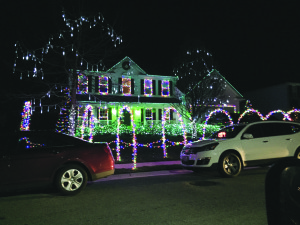 The 2015 Runner-up of The Catoctin Banner’s Holiday Home Decorating Contest: 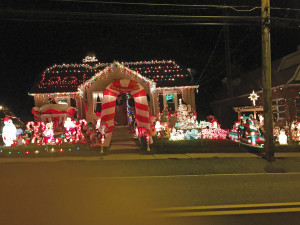 Many thanks to all who sent in their nominations. All of us at The Catoctin Banner wish all of our devoted readers a very Happy and Healthy New Year!