Wyatt’s Update: Up, Out, and About

The Hershey Children’s Hospital and Hershey Rehab, Wyatt Black, of Thurmont, who battled Bacterial Meningitis, was finally able to come home on June 3, 2016. Wyatt is getting better each and every day. His progress is slow and steady, but he is winning the race against this virus. His parents, Chris and Kiona Black, can see improvements in him weekly. Kiona (the one who holds this family together) is by his side 24/7. Kiona and Wyatt travel to Hagerstown for rehab three times a week for speech, physical, and occupational therapy. One of his physical therapy days is spent in the pool.

He is expected to start back to school at Catoctin High in the fall, where he will be a sophomore. Thanks to Wyatt being an overachiever in middle school, he earned three high school credit classes—Spanish 1 and 2 and Algebra—giving him enough credits before his sickness to advance to the next grade despite missing a large portion of his freshman year.

This summer, he is enjoying some time at the family’s orchard, Catoctin Mountain Orchard, swimming, and relaxing in the pond.
“His appetite is back to normal, eating us out of house and home,” Chris said happily. Wyatt hopes to begin walking with a cane (instead of a walker) in early August. 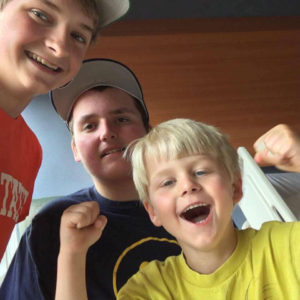 Wyatt Black (center) with his brothers, Nathan (left) and Eaves.