Are You Clever Enough to Escape Gettysburg? From The Mayor 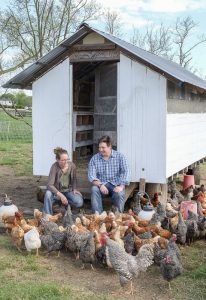 Wild Song Farm operates on a historic property known as Father’s Farewell on Moser Road in Thurmont. In 1738, the farm was part of the 500-acre Taylor’s Lot, owned by Johann Jacob Weller. Fifty acres were later passed to his stepson, John Henry Firor, who is believed to have built the beautiful stone home on the property, from 1765 to 1780. The property earned its name, Father’s Farewell, when son John Leonard Firor inherited it from his father, who moved west. The farm stayed in the Firor family until about 1872.

Since then, the farm has seen a dairy operation, beef cattle, sawmill and woodshop, horses, and even a goldfish-growing operation. Since 2015, when Thomas and Nicole Luttrell purchased the property, they have been preparing a farm business called Wild Song Farm. The name is appropriate because of the music of nature heard every day on the farm—song birds, frogs, and crickets. After big storms, you can hear Big Hunting Creek roar. Lately, the sound of clucking chickens and quacking ducks can also be heard.

Thomas grew up in Frederick and Nicole grew up in the Poconos, Pennsylvania. They met while attending Washington College on the Eastern Shore. Thomas studied economics, and Nicole studied biology and chemistry. While in school, they became interested in growing food and learning how to be self-sufficient. They both worked for a successful small produce farm called Colchester Farm, where they were part of the strong local food movement in Chestertown, Maryland.

After graduating, the couple moved to Frederick. Thomas worked for Hometown Harvest, a home delivery service for local food, while Nicole worked for the Frederick County Office of Sustainability, helping homeowners get energy-efficiency upgrades. She then worked with Ecologia Design, installing edible landscapes. Nicole still offers design and consultation services for edible and natural landscapes and homesteads through her business Deeply Rooted Design (www.deeplyrooteddesign.us).

On the farm, Thomas tends to take charge of the machines and animals, and Nicole tends to take charge of the produce and business management. They come together for many projects and to develop plans for the future. There are many reasons why the Luttrells decided to start a farm. The main reason was for their own health. They wanted to be in control of the food they eat. They also wanted to become more self-sufficient.

Nicole said, “It seems that so many skills are being lost. Farming has pushed us to learn about a very wide range of subjects. Not just plants and animals, but machines, electrical, plumbing, carpentry, and business management. We’re very excited about the possibilities of agriculture and all of the opportunities for innovation.”

While their current focus is on short-term crops like eggs and produce, they are also working on establishing some long-term crops like shiitake mushrooms grown on logs, unique and disease-resistant fruits such as paw paws, and even nut crops such as hazelnuts and Chinese chestnuts.

Another aspect of the farm that is very important to the Luttrells is connecting with the local community. There is something very special about knowing where our food comes from, and knowing the farmer who grows it. Thomas said, “We love this property because it is tucked right into Thurmont, a short walk to the library and to the trolley trail that leads to Main Street. We are surrounded by neighborhoods, including Jermae Estates just up Moser Road. There are many farmers that understandably drive to the D.C. area to sell produce, where there are more people and higher prices. But for us, we really want to feed the local people and do our part to help Thurmont’s local economy grow. And what better place to do it than a farm so close to town?”

The Luttrells have a flock of about 130 chickens living out of a big coop on a hay wagon that is moved around on pasture and through their gardens to do soil prepping. They make their own soy-free, non-GMO feed with local grain to ensure quality and freshness. They have a small flock of ducks that free range in their yard. They are currently selling eggs from the farm, and the eggs are also sold at The Lion Potter Market in Gettysburg.

They grow produce using organic practices, building rich and healthy soil. It’s important to the Luttrells that their soil is rich in nutrients and minerals, which then are passed into the food that customers eat. This year, they will grow a variety of greens, carrots, beets, radishes, turnips, cabbage, onions, tomatoes, peppers, cucumbers, summer squash, melons, garlic, winter squash, and shiitake mushrooms.

If you want to see a show, stop by and watch them cut and bale fifty-pound round bales of hay with a walk-behind two-wheel tractor, hay rake, and baler. They use that hay for chicken bedding and composting, and plan to start selling it this year.

Their farm stand will open soon, starting Saturday, May 13, at 13720 Moser Road. Expect Saturday and Sunday hours at the start of the season, with some weekday hours added as they move into summer. Eggs, produce, baked goods, and plants are available for sale. They are looking into offering some specialty items for sale from other local farms as well. Stop by their stand on Saturday, May 27, during Thurmont’s Sip N’ Stroll event for a special “buy two dozen, get one free” on eggs. Customers can also enter their names in a drawing for a $20.00 gift certificate.

For more information, visit www.wildsongfarm.com or check them out on Facebook at www.facebook.com/wildsongfarmthurmont.