By TheCatoctinBanner.com On December 30, 2015 · Add Comment · In Community News

November 23, 2015, marked the annual Community Citizenship Award ceremony held by the Thurmont Grange. This year, members joined together to share special memories and give thanks to the Keilholtz family who have volunteered so much time to our community. While members mingled and found seating for dinner, Bob Wiles gladly welcomed those who came out for the evening. The crowd proudly stood to recite the Pledge of Allegiance, followed by Addi Eyler singing the National Anthem. Roger Troxell held prayer.

Wiles turned attention to Niki Eyler who told of the Keilholtz family’s history. Bill Keilholtz served in the Air Force. He then worked on the family farm and purchased his first two milk trucks in 1946. He married his wife, Elizabeth in 1952. He began a trucking company known as Keilholtz Trucking. Bill and Elizabeth were members of many local organizations including the Catoctin FFA Alumni and the Thurmont Grange.

After the passing of Bill and Elizabeth, his sons Donnie and Billy, along with his grandson Chad, continued the family business. On behalf of Thurmont Grange President, Rodman Myers, Bill Powell spoke fondly of the Keilholtz family. “They are very giving; Bill would help anybody with anything! He was always there to back you up. People just took to him. If Bill told you something, you could hang your hat on it.”

Bill Keilholtz had an inspiring reputation for helping those around him. When cattle were in need of transport for local events, such as the Thurmont-Emmitsburg Community Show and The Great Frederick Fair, Keilholtz Trucking was there to bring the livestock in and out at the end of the day.

The Keilholtz family also has deep roots in our community’s 4-H society. In 1954, Ralph Lee Keilholtz, with other local residents, started the 4-H we know today. Dave Ekenrode said, “At the time, it grew to be the largest in the area with seventy-seven members.” Dave remembers meetings that were held at Ralph’s home, filling the living room and dining room, all the way to the steps. Ralph’s leadership was then followed by Patty Keilholtz.

Patty was not only the leader of Rocky Ridge’s 4-H, but also highly involved with the Maryland Angus Association. Patty was Junior Advisor. Her son, Chad, won the National Showmanship Contest. Mr. Powell said, “That’s almost unheard of because people in the Midwest beat ‘em out.”

Becky (Keilholtz) Clarke and her husband Tim’s daughters, Jessica and Taylor, were also accomplished in the local show rings as members of the Maryland Angus Association.

In 2015, Brenda (Keilholtz) Seiss has been leading the Rocky Ridge 4-H Club for nearly thirty-five years. She credits the highly popular youth organization to “…all of the parental help. I couldn’t do it without the parents and the families. When we want to do something, we don’t just pull a few kids in, we pull in everyone. I’m really fortunate for all the help we have.”

Her husband, Dave, is a local contractor. Their son, Bradley, another member who was known for his showmanship talent, is now the owner of newly opened “Seiss Woodworking,” located near Gateway Candyland, along Route 15 at Franklinville Road in Thurmont. Her daughter, Katie (Seiss) Eaves, is married to Andrew Eaves, whose family is also well known for their farming operations in the area.

Thurmont Grange Vice President Bob Wiles then called the family up to the front of the room to present Mayor’s proclamations from the Town of Thurmont, as well as the Community Citizen Award, honoring the Keilholtz family and the Progressive Rocky Ridge 4-H Club. In one way or another, a member of the Keilholtz family has lent a helping hand or assisted in bettering our community. There’s no better way to say it than Bob Valentine’s compliments, “There’s been no finer family around, than the Keilholtz family.” 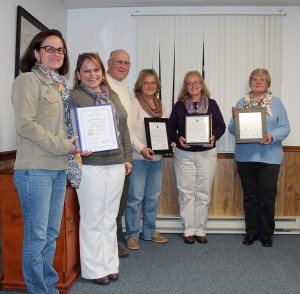 Niki Eyler and Bob Wiles present members of the Kielholtz family with the Thurmont Grange Citizenship Award and Proclamation from the Town of Thurmont, thanking the family, as well as Rocky Ridge 4-H Club.