By TheCatoctinBanner.com On February 28, 2018 · Add Comment · In Featured Articles

While looking through my postcard collection, I came upon a small brochure about Lake View Hotel, and I quote the brochure:

“Lake View Hotel is located midway between Frederick and Thurmont, Maryland on the Western Maryland and the Baltimore and Ohio Railroads, within two hours’ ride of Baltimore and Washington.

The hotel is high above sea level, overlooking the highest range of the Blue Ridge Mountains. One could hardly wish for a more ideal spot to spend a vacation than Lewistown, Maryland, located in picturesque Frederick County.

The Lake View is a large six-story (some places say 4-story) concrete building, with roof garden and sun parlor, commanding an excellent view of the Blue Ridge Mountains, far famed for their beautiful scenery.  The hotel contains 50 rooms, baths and toilet rooms, also 25 private baths, making it the largest and one of the most modern houses in this section of the country. The bed rooms are all large and airy, newly furnished in the most up-to-date manner. We can accommodate 125 guests. The dining room is spacious, light and well ventilated. Cuisine under the personal attention of the proprietor. Piazza is large and shady and the hotel is lighted throughout with acetylene gas.

In connection with the house is a 200-acre farm, producing all varieties of fruits and vegetables, with which the table is abundantly supplied; plenty of fresh milk, eggs, poultry, etc., the best the country affords.

Aside from the lobby may be found smoking room for gentlemen, private parlor and writing room for ladies. For health, comfort and beauty of natural scenery, this place is second to none in the mountains of Western Maryland.”

The hotel is located 6 miles north of Frederick; rail transportation could bring pleasure seekers to a peaceful setting that featured a casino, hotel, and lake. Charles Remsburg was a native of nearby Lewistown, having grown up on a farm originally laid out by his grandfather, Jacob. In addition to the family trade of farming, Charles found success in the late 1800s goldfish boom and was one of the county’s largest exporters.  He was also an investor in the Westminster, Frederick, and Gettysburg Railroad, which would traverse property owned by his family. He obtained this land and created a scheme to cash in on the new trolley line that would connect Frederick and Thurmont.

In 1908, Charles merged his many fishponds and formed a lake in the shadow of the picturesque Catoctin Mountain to the west. He looked to capitalize on the rail transportation line’s ability to deliver visitors in the same manner as neighboring mountain retreats, such as Braddock Heights and Pen Mar Park.

The brochure also boasts an up-to-date livery where saddle and driving horses could be had at a moment’s notice; ladies riding suits to hire; croquet, tennis, dancing; rambles over the mountains; and a large shady lake for fishing. Those fond of motoring could find one of the best automobile roads in the country, leading from Washington and Baltimore to Pen Mar and Gettysburg, passing the door of the Lake View Hotel. Persons afflicted with tuberculosis were requested to not apply for accommodations. (The State Sanatorium at Sabillasville for TB patients opened in 1908.)

From an article in Frederick Daily News, September 10, 1908:

“The hotel featured an elaborate amusement center in the form of a casino (a 2-story building with a first-class skating rink and a beautiful dance hall. On the first floor were 4 bowling alleys, a pool room, and cloak and toilet rooms). Guests were invited to use the lake for bathing, swimming, and boating, as row boats were made readily available.

The Lake View Casino opened in early September 1908. The crowd was estimated to have been at least a thousand persons, over 300 from Frederick alone.  Many went in carriages and other vehicles from surrounding towns.

Not all persons who desired to skate could be accommodated, as only a portion of the number of skates ordered arrived.  They are expected shortly.”

Sadly, the full potential of the site was never realized, suffering a devastating fire two years later, just prior to the opening of the hotel in May 1910. Mr. Remsburg had grossly under-insured his building, and with the outlay for the hotel, he was not in the position to rebuild the casino.

Over the next four years, the Lake View Hotel hosted pleasure seekers, but would suffer the same fate as the casino on June 16, 1914. Just days before opening for the summer season, the hotel burned to the ground. This time, a faulty heating apparatus was to blame.

Mr. Remsburg gave up his endeavors in the hospitality resort business and went back to an enterprise that was decidedly “fireproof.” He returned to putting his full attention to the business of raising goldfish.

In 1916, the Maryland Conservation Commission assessed the state for future fish hatcheries, especially trout. The following year, Lewistown was selected for the commission’s first hatchery. The state also stocked Remsberg’s Lake View with a supply of small-mouth bass, crappie, and catfish.

Plans for the proposed Lewistown hatchery were drawn up during the fall of 1917, and by January 1918, a 22 x 44-foot temporary hatchery had been completed at the site, and 400,000 trout eggs had been placed into the new hatchery. 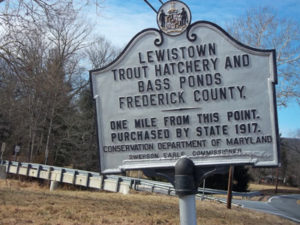 Little remains today that would suggest the size of the hatchery operation that once existed until the early 1950s. A sign on Fish Hatchery Road, off U.S. 15 south, states: “Lewistown Trout Hatchery and Bass Ponds Frederick County – Purchased by State 1917” (shown right).

Mr. Remsburg’s influence would have a profound effect on the son of his next door neighbors, Milton and Rosanna Powell. Their son, Albert M. Powell, developed a love of fish, as well, and served as the longtime Superintendent of Maryland State Fish Hatcheries. The Albert Powell Hatchery is located in Hagerstown, Maryland. Construction of this facility began in 1946 and was completed in 1949.

From Powell’s obituary: “Albert M. Powell, Fisheries Expert of Lewistown, Maryland, died in February 1991 at Homewood Retirement Center at age 93. He was retired superintendent of inland fisheries, retiring in 1967, after working in the state’s freshwater fish program for more than 40 years and briefly for the U.S. Bureau of Fisheries. He had been a member of the American Fisheries Society, The Potomac Valley Fly Fishing Association, and the Frederick County Fish and Game Protective Association. He wrote a history of the state programs and became an expert on shipping live freshwater fish, sending one shipment of small mouth bass to South Africa.”

The next time you travel to or from Frederick on Route 15, you will understand the meaning of Powell Road and Fish Hatchery Road, and possibly remember the ill-fated Lake View Hotel and Casino. 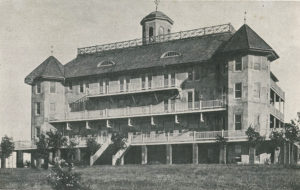