In mid-December 2015, the Board of Trustees of St. Joseph’s Ministries appointed Carla Brown as CEO/Administrator of its skilled nursing facility. Brown came to St. Joseph’s with a strong background in healthcare. Her abilities as a competent and consistent leader will be a welcome asset to St. Joseph’s Ministries, a facility striving to broaden and enhance the healthcare services it provides to the local community. Ascension Senior Living based in St. Louis, Missouri, sponsors this skilled nursing facility that fulfills an important role in providing care to the elderly and infirm in Northern Frederick County and South Central Pennsylvania.

The Daughters of Charity Ministries appointed George Brenton to the position of Campus Coordinator of the Emmitsburg Campus. This position was formerly held by Sister Clarisse Correia, a Daughter of Charity. Brenton also serves as Director of Facilities at the site, a position he has held since November 2012. In his added role as the campus coordinator for Daughters of Charity Ministries, Brenton will work closely with Carla Brown of St. Joseph’s Ministries and the administrators of all of the other ministries housed on the Emmitsburg Campus. The other ministries include Seton Heritage Ministries, which operates the Museum and Shrine of St. Elizabeth Ann Seton; the Provincial Archives of the Daughters of Charity; Villa St. Michael; the Seton Center Outreach Program; and Seton Family Store.

The Rite of Commissioning for Carla Brown was centered on the call of the Heritage, Mission, and Vision of Ascension Senior Living. Symbolic tokens were presented to Brown, representing the core values of Ascension Senior Living: Service of the poor, reverence, integrity, wisdom, creativity, and dedication. George Brenton was called by the Rite of Commissioning to support the Mission, life, and works of the Daughters of Charity in Emmitsburg. Brenton received tokens representing the core values of the Daughters of Charity Ministries: Reverence, integrity, generosity, and unity. He was also given items that symbolize two personal attributes that define his style of leadership: transparency and availability.

The Commissioning Ceremony reflected the high standards and expectations of both St. Joseph’s Ministries and the Daughters of Charity Ministries, stressing a commitment to not just doing the job well but doing it in a manner consistent with faith-based, Christian values, portraying an organization committed to serving the poor, the sick, and the elderly in our community. 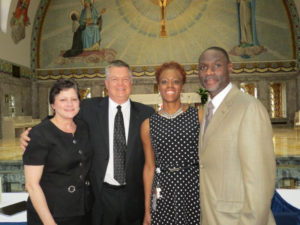