Members of the Acacia Masonic Lodge #155 of Thurmont hosted Strawberry night on June 20, 2016, in the Thurmont Community Park. This date was appropriate since the Strawberry Moon coincidentally occurred that evening. The Strawberry Moon, according to Native American Algonquin tribes, occurs when the full moon falls on the summer solstice. It announces the readiness of fruits and vegetables ripe for picking.

During the 2016 annual Strawberry Night ceremony, Lodge #155 honored young people in the Thurmont Community with scholarships to further their education. The event was attended by Acacia members, visiting Masons, and award recipients and their families.

Maryland Grand Lodge Treasurer Bill Giles said, “This is what Masonry is all about. The Grand Lodge of Maryland gives out $57,000 in scholarships throughout the state annually, while Acacia Lodge gives out $7,500 annually.”

The Masons provide a student from Catoctin High School with a scholarship of up to $4,000 for attending college level studies. Last year’s 2015 recipient was Lydia Spalding, who attended Frederick Community College and is pursuing a degree in Occupational Therapy. This year’s 2016 recipient was Justin Cissell. Justin is also a member of the Frederick DeMolay. He experienced a new level of making a difference in the community by being a part of the organization. He will attend Frederick Community College in the fall. Stephanie Kennedy received a scholarship of $1,000 to study Criminal Justice at Mount St. Mary’s University.

This year, a new special scholarship was created in memory of Brother Bernie Cohen, who passed away recently. Thurmont Worshipful Master (lodge president), John Hagemann, said, “If Brother Bernie had the chance, he would have given out all of the money in the lodge to the young people in the community.”

In honor of Brother Bernie, a scholarship was created in the amount of $1,000 plus a fundraiser (this year, a pig roast at Catoctin Breeze Winery raised an additional $500). Kylie Warner was the recipient of the award. She will attend Frederick Community College in the fall.

Young people who are interested in becoming a Mason may join as members DeMolay for young men or JOBS Daughters for young ladies. Women join the Order of the Eastern Star. Men join their area’s Masonic Lodge. For more information about our area’s Masonic membership, please call John Hagemann (Thurmont’s Acacia Lodge #155) at 301-271-2711 or Ernie Gelwicks (Emmitsburg’s Tyrian Lodge #205) at 301-447-2923. 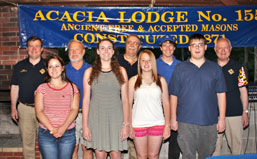 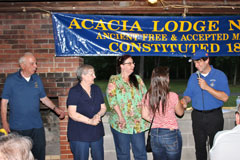 This year a new special scholarship that was created in memory of Brother Bernie Cohen who passed away recently. Pictured are his daughter Mary Ann, his wife Roberta, and his twin brother and fellow Mason George Cohen.