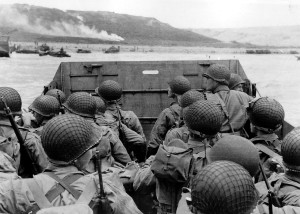 Donald Lewis stood crammed among a group of friends and fellow soldiers, trying not to lose his balance. The landing craft they were on was pushing toward its destination on Omaha Beach at Normandy, France. A strong current threatened to pull them away from their destination.

Lewis was a long way from his hometown of Thurmont, but he, along with millions of other young men, had been drafted to serve in the armed forces during World War II. Though he had entered the army as a private, he had risen to the rank of staff sergeant.

Lewis stood at the front of the landing craft hanging onto the edge of the wall. Around him, he could hear the explosion of artillery and see the explosions on the water and beach. Things seemed a mass of confusion, but it was all part of the largest seaborne invasion ever undertaken: the coordinated D-Day attack on German forces at Normandy, France. The invasion involved 156,000 Allied troops. Amphibious landings along fifty miles of the Normandy Coast were supported by naval and air assaults.

Lewis’ job in the invasion seemed simple. He was to go ashore first and mark safe paths across the irrigation ditches that crossed the beach.

However, the landing craft couldn’t make it to the beach. It grounded on a sandbar.

Lewis and the other men were still expected to take the beach, though. The front ramp of the landing craft was lowered and Lewis ran into the water. He suddenly found himself in water over his head, weighed down by a heavy backpack.

“I just had to hold my breath and walk part of the way underwater until my head was above water,” Lewis said. Though amazingly he was not wounded during that invasion, he was later wounded in the leg during an artillery barrage. His wound was near his groin, barely missing his groin. Lewis remembers laying in a hospital in England waiting to be taken into surgery.

“A big, ol’ English nurse comes walking up and she pulls back the sheet and looks at the wound,” recalls Lewis. “Then she says to me, ‘Almost got your pride and joy, didn’t they?’”

Another time, Lewis barely escaped being killed. He and other soldiers were up in trees along a road, waiting to ambush the Germans. However, the Germans were being careful that day.

“A sniper must have spotted me up there,” Lewis said. “I knew he hit my helmet. I started down that tree as fast as I could, grabbing limbs and dropping.”

When he got to the ground, he took off his helmet and saw that there was a hole through the front of it and a matching one through the back of it. Only the fact that his helmet had been sitting high on his head saved his life.

“People wondered why I didn’t bring the helmet home as a souvenir, but I didn’t want anything to do with it,” said Lewis.

“When I got my papers, I let out a war whoop and woke that place up,” Lewis said.

Once back in Thurmont, Lewis went to work on the family farm. He met his wife, Freda, who was a farm girl, also from Thurmont, and they married in a double ceremony with a couple they were friends with. 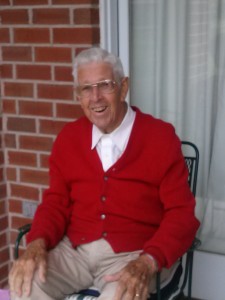 Lewis also had a political career. He served two terms as Mayor of Thurmont and one term as a Frederick County Commissioner. He said a group of people tried to talk him into running for governor, but he turned them down, saying, “I’m too honest for that.”

Lewis and his wife ran a sporting goods store and greeting card store on the Thurmont square for many years. He is now ninety-six years old and still living on his own. “I want to live to be one hundred,” he said. “After that, I’ll take what I can get.”

Veterans Day is on November 11. Make sure to thank any Veterans you know for their service, and attend one of the special Veterans Day activities going on in the area.

The Germans started firing on the beach and the landing craft. Lewis focused on his job and began marking the paths where troops could cross.

“When I looked back, men were laying everywhere,” Lewis said. “Just about everyone on the boat was dead.”

After the war, when he was invited back to Normandy for the anniversary of the D-Day invasion, Lewis always turned down the invitations. Now ninety-six years old, he has never returned to Omaha Beach.