We Are Patriotic at the Emmitsburg Senior Center Veteran Spotlight 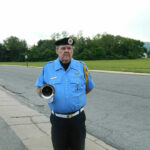 Merle Edward Crouse was born to Lester and Louise Crouse. He spent most of his life in Thurmont and went to the local high school;  at that time, the high school went from grade one to twelve. Ed went to school until the tenth grade, when he quit to go to work at the Thurmont Shoe Factory. He was working there when he was drafted into the Army in 1951.

Ed had an accident when he was 16 years old. He was driving a tack with a hammer; a piece of the tack flew off and went into his left eye, blinding him. At that time, being blind in one eye did not stop him from being drafted into the Army. Ed was inducted and was on a trip ship going over from California to Korea on July 10, 1951, when he received a telegram that he had a new born son, Eddy Jr.

Ed Sr. served in Korea until 1952, and the only thing Ed ever said about the Korean War was how cold it was over there. Being in the infantry, he did a lot of marching, and he was having problems with his feet. He got to the point where he could barely stand to walk; his superior officers thought he was faking, but he finally got in to the proper doctors and they discovered he had flat feet. The doctor made special inserts for him and got him back on his feet; he was better after that. He also said that he was in the infantry when he got there and then they put him on a half track as an ammo bearer for the machine guns on the half track; he said it was quite an experience. Ed Sr. was very proud of serving in the U.S. Army, and when he came home, he joined the American Legion and the Emmitsburg VFW. He enjoyed the camaraderie amongst the members. Ed Jr. said he was very proud of his dad for serving to protect him and our country.

When he returned home, he went back to work at the shoe factory. He was only making 40 or 45 cents an hour at the shoe factory, when he was married and had his first child, Ed Jr. A year later, he had a daughter they named Nancy. Money was tight. Ed Sr. heard there was a new business coming to town named Moore’s Business Forms, and when they opened, Ed Sr. got a job with them, staying for 33 years before he retired. Ed Sr.’s wife’s name was Elsie Elizabeth Hurley of Foxville; Ed Sr. and she were married for 63 years. When Ed Sr. and Elsie first got married, they lived in an apartment at the corner of Radio Lane and Carroll Street. They moved to 16 Elm Street next, when Ed Jr. was about 10 years old. A house building company came to Thurmont called National Homes; they built a lot of reasonably priced houses. At first, Ed Sr. thought he would not be able to afford one of the homes. He had gone to the old Thurmont bank and the president of the bank was Steppy, and Steppy would not let Ed Sr. have the money because the lot and the house was about $7,000 and Ed Sr. needed more collateral. So, Ed Sr. went to the Farmers and Mechanics Bank in Frederick, and they loaned him the money. He got the house built on 16 Elm Street. That is where Ed Sr. and Elsie lived until they died, and Ed Jr. and Nancy lived there until they each got married and left home. Ed Sr. and Elsie never went far from Thurmont, their hometown. Elsie died in 2013, and not quite a year later, Ed Sr. died. Ed Jr. said that because of the way that his parents raised him and his sister, they couldn’t have had better parents. Things were a lot different back then, but good parents were invaluable, instilling the way things should be and respect and politeness in their children. The respect and politeness are some of the things that seem to be missing in children today.

Ed Crouse Sr. was the kind of man I would have really liked to have met. I enjoyed every minute with Ed Jr., listening to all the details of his dad’s life and the love he showed when he spoke of his dad.

Keep an eye out for my column in the August edition of The Catoctin Banner when I write about another neighborhood hero: a former Maryland State Trooper who retired after 25 years of service.

God Bless the United States of America, God Bless Our American Heroes, and God Bless You.