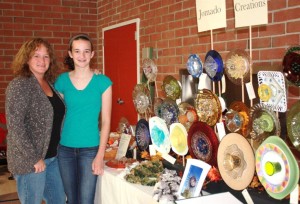 A rather inauspicious opening day of MountainFest at Sabillasville Elementary School in Sabillasville, Maryland, deterred many visitors due to the chilly, misty weather.

The NFCCA headed by President George Kuhn describes the gathering as a unique alternative for artisans and crafters to display their wares in an ideal environment without the crush of crowds and parking fees.  He considers the relaxed country setting a perfect place for friends and neighbors to gather and enjoy local churches’ baked goods, live music, an affordable meal, and ice cream from Antietam Dairy, an ever-welcome fixture at MountainFest.

Robert Eyler of Rocky Ridge provided fare from his food truck on Saturday and Sunday.  The menu included hamburgers, hot dogs, fries, and other items, but he sold out of pit beef and soup both days, a testament to the popularity of Eyler’s chow.

MountainFest is the only fundraiser held by the NFCCA.  It primarily benefits students through the Catoctin feeder school system who choose to apply for scholarships. George, whose duties include vendor registration and assignment of spaces, explained that there are three categories of scholarships, including academic, auto industry, and the lesser known designation for individuals wishing to continue their education.

There were approximately twenty-five exhibitors at the show, including George who had a wide array of antiques and collectibles that he’s found at a variety of sales. He claims no special knowledge, but happily enjoys the quest and how interesting he considers the individual items he finds.

MountainFest draws in crafters and artisans from towns hither and yon.  Jack and Holly Olszewski of Cascade, Maryland, displayed their fossils, crystals, minerals, and massive teeth from the ancient megaladon.

Jerry Stiffler from Wellsville, Pennsylvania, builds distinctive cupboards and shelving fashioned from salvaged antique wood from deserted barns and other buildings slated for demolition.  He strives to learn the age and history of the structure and includes that information with the purchase of each piece.

Another popular draw was hand-crafted jewelry by Deanna Maginnis from Myersville, Maryland, who designs and fabricates her own jewelry from a variety of beads to semi-precious stones, including freshwater pearls to Swarovski crystals.

Sunday, the emerging sun illuminated glistening chrome and shiny paint jobs, highlighting another popular feature of MountainFest, the much anticipated annual car show, founded over thirty years ago by the late Kenny Tressler.

George Kuhn credits the continued success of the car show to current chairman Jason Worth of Sabillasville, who registered 110 antique and classic rides this year. Funds raised from the car show go toward the NFCCA scholarship fund.

Jason, who has helped with the annual car show for six years and been the chairman for three, points out that the show isn’t limited to antique or classic cars, or what car lovers describe as “Detroit Muscle.”  Any car can be entered in the show for a $10.00 fee, which allows the entrant to vote for twenty-five awards and a chance at a variety of door prizes offered by local businesses from Thurmont; Emmitsburg; and Waynesboro, Pennsylvania, who generously provide goods and services.

Jason extends his gratitude to everyone who contributed cash and/or door prizes, the gathering of which involves friends and family who volunteer to visit the local businesses and cites ultimate beneficiaries:  students looking for a financial boost in their respective hopes to further their education with NFCCA scholarships.

Three additional awards included one for the vehicle that traveled the greatest distance, which hailed from Bunker Hill, West Virginia. The Oldest Vehicle award was bestowed on 1927 Ford Model A. Voted Best in Show was a ’69 Chevelle.

A fitting finale to a beautiful Sunday at MountainFest was punctuated by rumbling thunder from the exhaust systems of the cars, a veritable symphony to any car enthusiast’s ears as the participants departed the show grounds.

The descending sun reflected in the cars spotless paint jobs and flashed like lightning as the show cars headed toward the horizon.