By TheCatoctinBanner.com On October 27, 2017 · Add Comment · In Featured Articles 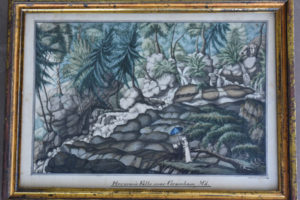 In the October issue of The Catoctin Banner, the cover article was called “The History and Mystery of McAfee Falls.” In it, we explored the McAfee family, who were the landowners of the falls, now called Cunningham Falls and part of Cunningham Falls State Park. We invited people to help solve the mystery about why the falls were named Cunningham Falls at some point in the early 1900s. Despite hundreds of hours of research, the reason Cunningham was selected as the name of the recreation area and falls remains a mystery. After printing the article, some tidbits came to light that may further help to eventually uncover the mystery about the naming of the falls to Cunningham Falls after being called McAfee Falls or Hunting Creek Falls in various news articles.

After our article published, one of the McAfee family’s patriarchs, Rob McAfee of Foxville, was told by a lady that she believes there was a family of Cunninghams that lived near the falls on the way to Foxville. Also, a family in Thurmont invited me to take a photo of an 1822 watercolor painting of the falls by Samuel Reinke (see photo). The artist painted himself and his wife, holding a parasol over him, in the lower center of the picture. From The History of Graceham, compiled by Rev. A.L. Oerter in 1913 from the Graceham Moravian Church diary, “Friday, October 25, 1822 Bros. and Sr. Samuel Reinke arrived from Lancaster to participate in the dedication of the new church on Sunday, October 27, 1822.” 1822 is the date of the painting.

The inscriptions or marks on the bottom of the painting say Herman’s Falls Near Graceham Maryland, signed lower right: S. Reinke pxt. 1822.

Note: This past July, the McAfees held a family reunion and staged some family photographs that were similar to those taken by their ancestors at the falls. In last month’s cover photo, Becky Hurley was misnamed as Pauline McAfee. Our apologies, Becky