By TheCatoctinBanner.com On May 25, 2018 · Add Comment · In Featured Articles

Although milk and other dairy products are no longer delivered fresh to your door daily, they are still part of our everyday lives, whether it’s drinking milk, enjoying ice cream, or adding cheese to a dish. June is National Dairy Month and celebrates the contributions that the dairy industry makes to the economy and to our health.

Locally, many dairies have provided home delivery over the years. Milkmen had regular routes they traveled, first by wagon and then by truck, delivering fresh milk, cottage cheese, cream, and other dairy products. They would pick up the empty bottles and return them to the dairy, where they would then be washed and used again.

“The first one that I know of is Homarway Dairy,” said Dennis Black, a collector of milk bottles from the area.

The dairy was a partnership between Guy Hobbs, Lee Martin, and Daniel Weybright. Gall and Smith Dairy bought Homarway in 1932. This large operation in Emmitsburg and Thurmont was apparently the only local dairy where you could purchase a gill (1/4 pint). These small glass bottles were used for holding cream.

Although some of the local dairies sold raw milk, many did their own pasteurization. However, buying raw milk allowed for the buyer to skim the cream off the top of the milk as it separated. The milk, itself, also tasted thicker and richer, according to Black. Buyers also sometimes looked for dairy farms with particular cows. This is because certain breeds were known to have a greater or lesser fat content in their milk, which affected the taste.

“Pasteurization is what killed the local dairy farmer,” stated Black.

When pasteurization became the standard, and grocery stores installed refrigerated sections, customers began buying milk during their weekly grocery shopping. During the 1960s, the local milkman became a thing of the past.

“Bollinger Dairy was the last one in operation in Thurmont,” Black recalled.

Northern Frederick County had two Bollinger Dairies, which could be confusing at times. One operated in Thurmont and the other in Emmitsburg. Collectors can tell the difference because the dairies used different bottles. Bollinger’s Dairy in Emmitsburg always used embossed bottles, while Bollinger’s Dairy in Thurmont always used bottles with the lettering painted on them (pyro-glazed).

Black has created a display of bottles and caps from local dairies in the Thurmont Regional Library, on permanent loan. The display case is located next to the entrance to the Thurmont Center for Agricultural History in the library. Black is always looking for information and artifacts about local dairies that he might have missed. If you have any information, he can be reached at 301-271-4297 or dennisblack1@msn.com. 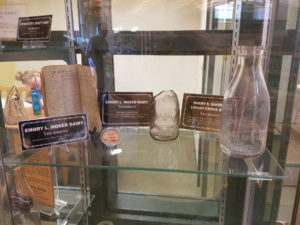 Dennis Black, avid collector of milk bottles in the area, showcases his bottles and caps from local dairies in the Dairies of Catoctin exhibit at the Thurmont Regional Library.