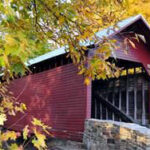 By TheCatoctinBanner.com On September 26, 2019 · Add Comment · In Featured Articles

This is interesting information published in 1878 as a Frederick County, Maryland, resource. It makes one realize just how much things have changed in more than 100 years.

Frederick County ranks with the largest Maryland counties, having an area of 642 square miles, and is bounded on the north by Pennsylvania, on the east by Carroll, south-easterly by Montgomery, south by the Potomac River and Virginia, and on the west by the Blue Ridge, or South Mountains, separating it from Washington County.

This is one of the richest and most beautiful counties in the state. The soil is mostly limestone, with some slate and considerable “red lands.” The surface is undulating, partly mountainous — the Catoctin Mountains dividing the county into two broad valleys that to the westward being known as the Middletown Valley, which is drained by the Catoctin River and its branches; and that east of the Catoctin range is the valley of the Monocacy. Both rivers flow southward into the Potomac.

Emmitsburg is situated at the terminus of the railroad of that name, and 7 miles from Rocky Ridge on the W. M. R. R. The location is in a fertile and diversified country, the surroundings of which are rich in mountain and valley scenery. To the west, Jack’s Mountain and Carrick’s Knob may be seen towering hundreds of feet in the skies and then sloping in graceful lines to the productive and beautiful valley below. The magnificent scenery, purity of the atmosphere, good mountain water, cordiality and refinement of the people make it a great place of summer resort; it is also enriched by educational institutions of great merit and celebrity. St Joseph’s Academy, conducted by the Sisters of Charity, and Mount St. Mary’s College, an institution of high endowment and character, are both near the town. There are also two public schools for whites, one for colored, and a Catholic Parochial School. The land adjacent is composed of red sandstone, quartz, and limestone; varies in price from $20 to $60 per acre, according to location and improvements; yields 15 to 30 bushel wheat, 20 to 40 oats, 50 to 150 potatoes, 20 to 50 corn; and 2 tons hay. Massasoit Tribe 41, I. O. R. M.; Junior Building Association. Population 900. Samuel N. McNair, Postmaster.

Lewistown is situated on the Emmittsburg Road, 10 miles from Frederick and 5 from Harmony Grove. Land, red clay, and limestone sells at from $10 to $100 per acre; produces 12 to 30 bushel wheat, 50 corn, 40 oats, 100 potatoes and 2 tons hay. Crops are generally good. M.P. Church and two public schools. Population 175. A.N. Cramer, Postmaster.

Justice of the Peace: Cator, Henry.

Mechanicstown (now Thurmont) is on the W.M.R.R., 56 miles from Baltimore, 15 by pike from Frederick and 27 by rail, and three-fourths of a mile from the Catoctin Mountains. The nearest streams are the Hunting and Owing’s Creeks; it is located in a pleasing and thriving country. The climate and health are good, business fair. Soil is of red shale, yellow slate, alluvial, and some limestone. The land is principally cleared, ranges in prices from $30 to $60 per acre, and yields 8 to 20 bushel wheat, 10 to 40 oats, 80 to 50 corn and 1 to 2 tons hay. The Catoctin Furnace is within 2 miles and in operation. The timber now remaining consists of oak, hickory, walnut, chestnut, poplar and beech. Population 700. John Root, Postmaster.

Justice of the Peace: White, Frederick.

Justice of the Peace: Norris, AL.

Justice of the Peace: Luckett, WF.