By TheCatoctinBanner.com On June 29, 2017 · Add Comment · In Featured Articles 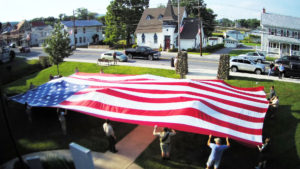 On June 14, 2017, a Flag Day Ceremony at Thurmont’s Memorial Park was hosted by the communities of Emmitsburg and Thurmont, with the support of Thurmont American Legion Post 168, Emmitsburg American Legion Post 121, Thurmont Amvets Post 7, and Emmitsburg VFW Post 6658. Area Boy Scouts, Girls Scouts, Cub Scouts, Brownies, and Venture Crew helped with the Flag Retirement portion of the ceremony. Thanks to those representing our Veterans organizations and Scouts for helping celebrate the 240th Anniversary of the adoption of the United States flag by the Second Continental Congress on June 14, 1777.