Emmitsburg Walks Off With Three-Peat

Emmitsburg hosted the Cal Ripken 12U 46/60 state tournament from July 2nd to July 7th, for the third consecutive year. Emmitsburg was coming off of back-to-back state titles entering the tournament, and was returning eight players from last year’s championship winning team. With these players and the addition of some new talent, Emmitsburg was optimistic to win its third straight championship in front of the home crowd.

On July 2nd, Emmitsburg opened up pool play against UMAC. Emmitsburg had a slow first inning, but Johnny Glass led off the second inning with one of his two homeruns for the game. Glass also dominated on the mound, pitching four innings and allowing just one run on one hit. Bryson Caballero finished the game with two strong innings. Garrett Malachowski cleared the bases on a three-run homerun in the 5th inning, scoring Logan Harrington, Brendan Ott and himself. Lucas Royce, Evan Ott, Johnny Hoffman, and Jayson Howard all had hits as well. Emmitsburg tallied 16 total hits in the opening game, winning 10-1 over UMAC.

In the second game of pool play, Emmitsburg played Smithsburg, who was last year’s runner-up in the state tournament. Dylan Click had two hits, including a homerun. Caballero blasted a homerun as well. Malachowski hit another homerun to add on to his hot hitting performance. Caballero pitched four innings and Glass pitched two innings, combining to allow no runs on just three hits. Emmitsburg improved to 2-0 in pool play with the 6-0 win.

Frederick was Emmitsburg’s third opponent in pool play. Dylan Click started the game on the mound and pitched two innings of no hit ball. Sean Mazaleski and Garrett Malachowski both pitched two innings as well, each getting four strikeouts. Mason Joy drove in two runs in the 1st inning to put Emmitsburg ahead. Noah Oleszczuk added three more runs in the 2nd inning when he launched a three-run homerun. Malachowski hit a grand-slam homerun in the third inning of the game to make it 9-0. Frederick scored one in the bottom half of the inning to make it 9-1. The score remained 9-1 until the 6th inning when the Ott brothers drew back-to-back walks with the bases loaded to add two more runs. Emmitsburg won 11-1, and improved to 3-0 in pool play.

In the last game of pool play, Emmitsburg played Severn. The last time the two teams played against each other was in the 2012 state championship game, where Severn beat Emmitsburg. Emmitsburg has not lost a state tournament game since that loss. The game was a pitching duel, with each team throwing one pitcher the entire game. Emmitsburg’s Bryson Caballero allowed only three hits and struck out nine batters. The deciding factor was an early 1st inning homerun by Emmitsburg’s Noah Oleszczuk. Emmitsburg won the game 1-0 and finished pool play 4-0. Emmitsburg advanced to the title game for the fourth straight year with hopes to win its third straight championship.

Severn beat UMAC in the semi-finals to setup a rematch with Emmitsburg. Emmitsburg started Johnny Glass on the mound. Emmitsburg took a one run lead in the 1st inning when Bryson Caballero drove in Dylan Click. Severn scored in the 4th inning on a two-run homerun, which gave Severn the lead 2-1. In the bottom half of the 4th inning, Noah Oleszczuk answered with a two-run shot of his own. This gave Emmitsburg the lead again, 3-2. After a scoreless 5th inning, Severn tied the game on a solo homerun in the top of the 6th. This sent Emmitsburg into the bottom half of the 6th, needing a run to win. Johnny Glass pitched a strong six innings, striking out 12 opposing batters. In the bottom of the 6th, Severn got the first out and needed just two more to force extra innings. As the intensity of the game was building, Emmitsburg’s ninth batter, Logan Harrington stepped up to hit. Harrington is a great base runner with good speed; if he gets on base then Emmitsburg would be in a favorable situation with the top of the order coming up. Harrington, however, made history. He hit a walk-off homerun to send his team to the Middle Atlantic Regional. It was his first homerun of the season, but he saved it for the right moment. Emmitsburg won 4-3 and were state champions for the third consecutive year.

In the second game of pool play, Emmitsburg played Waynesboro. Dylan Click and Johnny Glass had Emmitsburg’s only hits. Emmitsburg lost 10-0 and dropped to 0-2 in pool play.

In day two of regionals, Emmitsburg played Severn, MD in their first game of the day. Dylan Click and Johnny Glass pitched three innings each, holding Severn to just one run. Dylan Click had two hits, including a homerun with two RBIs. Bryson Caballero had four hits with two RBIs. Johnny Glass and Logan Harrington had two RBIs in the game as well. Jayson Howard had a pinch-hit and RBI. Emmitsburg won 10-1 to improve to 1-2 in pool play.

In the final game of pool play Emmitsburg played Marlton, NJ. A win would advance Emmitsburg into the quarterfinals. Solid pitching from Johnny Glass, Dylan Click, and Bryson Caballero backed Emmitsburg, as they didn’t allow a run. The game was decided by a lone run, coming from an RBI single from Evan Ott in the second inning. Emmitsburg won 1-0 and finished pool play 2-2, advancing to the quarterfinals as the three seed from their pool.

In the quarterfinal, Emmitsburg played Delaware Valley, PA; Delaware Valley was the Pennsylvania state champion. Emmitsburg’s Brendan Ott had a hit and Logan Harrington had two hits. Johnny Glass had a two-run homerun in the third, scoring Emmitsburg’s only runs in a 6-2 loss.

Emmitsburg finished a great season, advancing to a regional quarterfinal for the first time in the league’s sixty-year history. 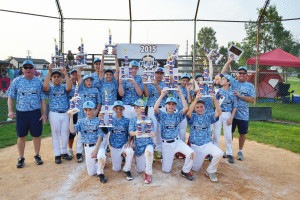