By TheCatoctinBanner.com On October 28, 2015 · Add Comment · In School News

The second class to graduate from Catoctin, but the first to spend a full school year at that location, was the class of 1970. This class was one of several that was honored at this banquet. Other classes included those with graduating years ending in 5 or 0.

It is of note that the Class of 1953 had 20 graduates, eighteen of them were present at this banquet. The oldest alumnus in attendance was Emory Motter (95) from the class of 1934. Calvin Chatless, class of 1970, traveled the farthest, coming from New Jersey.

For the past 22 years, the association has awarded annual scholarships to several individuals seeking further education. This year’s scholarships were awarded to four students: Josh Little (Mount St. Mary’s University), Elizabeth Shriver (Delaware Valley College), Taylor Shank (Clemson University), and Sophia Eureka (Robert Morris University). For the second year, an additional scholarship was derived from an anonymous gift in memory of Emmitsburg’s 6th grade teacher, Mary B. Scott, who taught for many years at the old Emmitsburg School. This scholarship was also awarded to Devin Cash (Salisbury University).

This year’s entertainment (singing and keybaord) was provided by John Martin (Class of 1970). Various parts of the presentation were given by Phyllis Kelly, Jim Martin, and Joyce Bruchey. Special thanks was given to those who hold, or have held, volunteer positions with the Alumni Association.

Calvin Chatless put together display boards (donated by Eric Glass) showing newspaper articles and photos of the partnership that was created when Emmitsburg and Thurmont High Schools combined into Catoctin High School. He said that the two schools were rivals and had to show up to a couple of scuffles to establish themselves. But, with time, Principal Howard Goodrich, allowed Emmitsburg to have a large influence on the new school with input into the mascot, class ring, and artwork (by Carolyn Keilholtz) for the crest (handshake) for the school.

The rivals merged in every way for the class of 1970. The soccer team won a championship and the basketball team went to county championships in that first year. Calvin stressed the importance of the heritage from Emmitsburg that the students were able to carry to the new school. He said, “We had a wonderful experience there.”

During the banquet, alumni in the honor classes were asked to introduce themselves. John Horine shared that Kenny Swomley (Class of 1962) is being inducted into the Frederick County Soccer Hall of Fame on December 5. He is also in the Alvin Quinn Hall of Fame. Other Hall of Famers associated with Emmitsburg High School include John Horine (coach), George Kuhn (coach), Paul Straud, and John Weaver. All three Swomley boys, Kenny, Dick, and Dave, have been inducted into the Mount St. Mary’s Sports Hall of Fame.

It is important to note that students who attended Emmitsburg High School at any time during their education, regardless of whether or not they graduated, are encouraged to be part of The Emmitsburg Alumni Association. Joyce Bruchey’s parting words for the evening were, “Stay healthy and bring a classmate next year.”

Next year, the classes that end in a 6 or a 1 will be honored. Alumni historian, Joyce Bruchey (Class of 1962), is always appreciative of photos and memorabilia from the students. She said, “If something happens to you and your children are going to pitch it out, pitch it to me.” Souvenir books for honors classes are available for $5.00 each. Call Joyce at 410-775-7921 if you have Emmitsburg High School history that you would like to contribute or for more information. 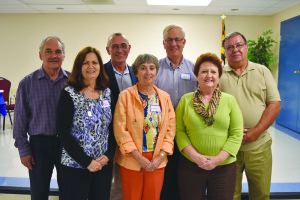 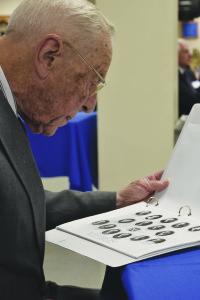 Emory Motter, the oldest alumnus in attendance, looked through a Class of 1934 Memory Book. 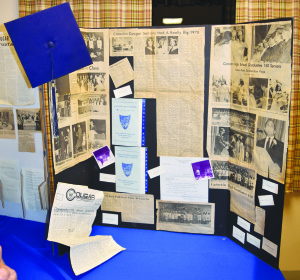 Calvin Chatless put together display boards (donated by Eric Glass) that showed newspaper articles and photos of the partnership that was created when Emmitsburg and Thurmont High Schools combined into Catoctin High School.