An Interview with a Jeopardy Champion 2016 Blizzard Jonas

By TheCatoctinBanner.com On January 27, 2016 · Add Comment · In Featured Articles

Training Center,Besides helping residents before and after the fires in Emmitsburg, the American Red Cross and Vigilant Hose Company (VHC) set out to stop fires from happening again.

“Emmitsburg’s all-volunteer fire department, the Vigilant Hose Company, was challenged, to say the least, in terms of firefighting and rescue efforts, but, in spite of significant challenges, managed to accomplish what many locally, all across Northern Frederick County and surrounding counties, continue to say was amazing,” stated Wayne Powell with Vigilant Hose Company.

Vigilant Hose Company has offered installation of free smoke alarms for years, but with the two fires in town in December, residents’ interest in having their smoke alarms checked increased. The first fire occurred on Wednesday, December 2, 2015, mid-afternoon, at Paul’s Pit Stop on South Seton Avenue and the apartments above it. The second fire occurred on Monday, December 7, 2015, at 112 West Main Street, a few doors west of the Vigilant Hose Company fire station. In the second fire, two residents died from injuries, and one person was seriously injured.

“For years, VHC has installed free smoke alarms, but the men and women of the VHC knew they had to take full advantage of public attention—or ‘window of opportunity’ as it’s known,” said Powell.

Homeowners who had previously turned away volunteers doing smoke alarm checks were suddenly interested in having their alarms checked. First responders, community leaders, Mount Saint Mary’s University staff and students, and employees from the National Emergency Training Center, all pitched in to cover as many homes as possible.

Powell pointed out that the smoke alarms were free only as long as the volunteer teams were allowed to install them.

“We have found that if we give them away without installing them, they wind up in a drawer and people forget about them,” Powell said.

He also said that some people took the batteries out and used them for other things. The smoke alarms that Vigilant Hose Company installed now have a ten-year long-life battery built into them that can’t be removed.

Despite years of Vigilant Hose Company public fire education and year-round smoke alarm promotion, teams found a number of homes with no smoke alarms at all, many non-working units, and others well over ten years old, plus a few with one alarm in homes with more than one sleeping level.

The initial results from the December home fire safety visits and smoke alarm checks was: seventy-eight homes visited and two hundred seventeen smoke alarms installed within three hours. Volunteers were broken into seventeen on-the-street “Safety Teams.” Their goal was to check and see if a smoke alarm was installed on each level and each sleeping area of a residence. A “Go-Team” at the fire station provided smoke alarm expertise from a smoke alarm expert of the U.S. Fire Administration staff, as well as additional literature and alarms as needed, plus handling other normal duties including fire calls.

“Phone call requests for VHC visits have been coming non-stop from across the community ever since,” Powell commented.

As of January 10, 2016, two hundred forty-eight smoke alarms had been installed.

Vigilant Hose Company has carried smoke alarms on its emergency vehicles for years in order to install them whenever possible. They routinely conduct safety presentations to any and all groups who allow it.

Those seeking further information or wish to schedule a visit, contact the Vigilant Hose Company via its website at www.vigilanthose.org or call the fire station at 301-447-2728. 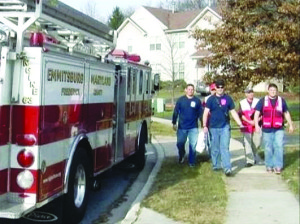 A Safety Team hit the streets in Emmitsburg on December 12, 2015; they were welcomed by residents, with many others now asking for visits.