By Maxine Troxell On February 28, 2017 · Add Comment · In Featured Articles 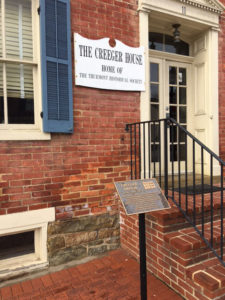 As a youngster, Thurmont Historical Society Board Member, Robert Eyler, remembers seeing the Creeger House on his visits from his home in Frederick to his great-grandparents Joseph and Anna Mary Eyler’s house in Thurmont. “As a kid, it was the coolest looking haunted house,” recalled Robert.

Robert was enamored with haunted houses then, and still is. He participates in paranormal investigations. He said his interests have “come full circle” since he orchestrated an investigation of the Creeger House by the Gettysburg Ghost Gals last spring, and serves on the Society’s Board of Directors. He first became familiar with the Thurmont Historical Society when he utilized the Society’s volumes of history to research his family heritage. Robert’s fifth great-grandfather, Frederick, settled Eyler Valley. His son, Benjamin, helped build Eyler’s Valley Chapel for the Eyler family and their friends, because they had no place to worship there.

One day last fall, Robert and Board President, Donna Voellinger, were observing the progress of the brick sidewalk being installed at the front of the Creeger House. Oddly, they noticed dust emanating from the bricks on the front of the house. This seemed to be caused by the vibrations of a jackhammer being used on a patio.

The front of the Creeger House is a facade of bricks, encasing the original log cabin. The bricks are old and soft. To explain the current decay of the bricks, Robert said, “Bricks then weren’t made to withstand the road salt, jarring from equipment, and constant traffic.” Donna added, “At one point, the whole house was covered with Ivy and Wisteria, possibly adding to the decay.”

The Thurmont Historical Society Board of Directors have received a $60,000 quote for repairing the brick.

The Creeger House, located at 11 North Church Street in Thurmont, was originally owned and occupied by Daniel Rouzer and his family in the early 1800s. It is named after Edwin Creeger, who purchased the house in 1926. Edwin was the local Chevrolet dealer. His only son, Edward, was a naval aviator who lost his life in World War II. He was the first war casualty from Thurmont and is memorialized in the naming of the American Legion Post. After Mr. Creeger’s death in 1969, his wife, Ethel, left furniture, clothing, and books behind and never returned to the house. It was vacant for twenty years. In 1990, at the suggestion of Sterling Kelbaugh, Terry Best, and Buzz Mackley, she donated the house to the Thurmont Historical Society. Ethel died in the summer of 1995 and never saw the renovations and restorations that have been made to her old home.

Inside the house, the stories of triumphs and tragedies of the families who lived in the Creeger House, and other families of Thurmont, are housed and shared. Carol Newmann, with the help of Liz Stitely, currently manages the Society’s research library. This library has grown from a foundation of information and collections provided by the late Ann Cissel. It now includes many donations of genealogy and history provided by Thurmont resident and non-resident contributions.

“We have a good collection of books and papers. Most are local. Some are from Pennsylvania, Virginia, Carroll County, and Frederick County,” Newmann said. She can lead you to resources for tracing your family’s lineage, or show you historical photos and documents. You can visit the Creeger House on Sundays, between noon and 4:00 p.m., or call 301-271-1860 to make an appointment.

Donna Voellinger takes pride in managing the relics or “physical objects” that are part of the Society’s collection. See a wooden check that was written and cashed (see photo on page 12); stand in Edward Creeger’s bedroom and view his World War II uniform; see a Seatmore Ice Cream and Soda Table Set where people sat to enjoy ice cream at Wisotzkey Brothers Ice and Ice Cream on the square in Thurmont (see photo on page 12).

Carol and John Ford are the unsung heroes at the Society, quietly giving time and talent to various projects that need to be done. New volunteers are always welcome.

With determination and purpose, the current Board of Directors of the Thurmont Historical Society are tackling the next project in the life of the Creeger House. Monetary help is needed to “Save the Creeger House.” An estimated $30,000 will be raised and matched with grant funds. To help, send a donation.

Online donations can be made with PayPal by visiting www.thurmonthistoricalsociety.org, by mailing to Thurmont Historical Society, 11 N. Church Street, Thurmont, MD 21788, or by dropping by the Creeger House on Sundays between noon and 4:00 p.m. Call 301-271-1860 for inquiries. 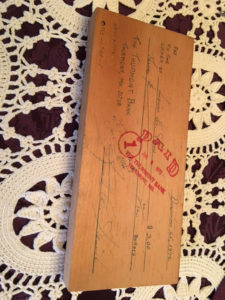 Pictured is a wooden check that was written and cashed, part of the Historical Society’s collection. 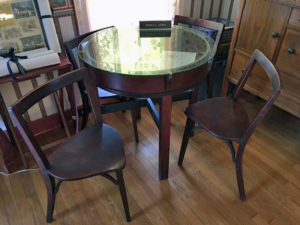 Displayed at the Creeger House is a Seatmore Ice Cream and Soda Table set, where people sat to enjoy ice cream at Wisotzkey Brothers Ice and Ice Cream on the square in Thurmont