Once Upon a Time on Catoctin Mountain… Our Neighborhood Veterans

Urban legend tells a story of a young woman in the late 60s and early 70s, who upon graduating college, decided to hit the farmers market scene. Her booth in New Jersey had a single apple pie that she had placed at the audacious price of $100 (that’s $12.50 per slice). It took her most of the day, but she finally sold it. No word on whether the purchaser felt it was worth it or not, but she went on to build an empire of magazines; to appear on television shows; and to sell her goods in K-mart, Target, and Macy’s. But no matter how easy her success seems today, Martha Stewart is the story of what an amateur “foodie” can obtain if they work hard, appreciate the business, and get unbelievably lucky to become a successful culinary pro.

In my career in the food service industry, I have met a fair number of people who have never marketed, prepared, plated, and served a single meal for profit in their lives. But if Chef Boy-R-Dee, the McDonald Brothers, and even Paula Deen all did it, these same people think: why can’t I? If passion is a key ingredient in these pursuits, then one can acquire the rest of the qualities needed to become successful. Obviously, they are the grill master of their backyard or the neighborhood cookie queen, but following through can get a bit dicey. Getting your ducks in row can be a daunting task.

Case in point: Dave Peters. Peters, the co-founder of a small family software business, clearly has the first element: a great love for producing great food. “I just love cooking in general, but the most rewarding is producing something that is of high quality,” Peters said. Making cured and smoked meats for his family and friends has given him a deep understanding of the process needed to make and produce these products.

So far, he is planning to start his venture by selling sausages and Canadian and American bacon under his company’s name, Peters’ Gourmet & Artisanal Meats. These are all considered cooked items and will be easier to get a license for producing. “The government regulations can be pretty strict; once you mention curing, you tend to get a lot of attention.”

Although it will take time to get his full project up and running, Peters is hoping to get all of his products in a farmer’s market soon. Getting the overwhelming paperwork needed to get a charcuterie license is almost a hobby of its own. And maybe someday his hard work will build a business that will inspire the next group of culinary hobbyists to take the plunge into the deep end in which food pros thrive. 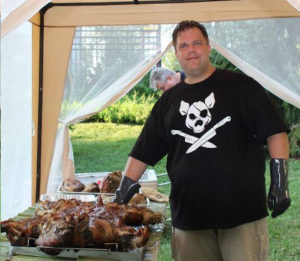 David Peters with some of his masterpieces.