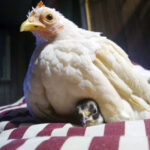 In Admiration of the Chicken

When it comes to our fine-feathered friend, the chicken, I have to admit I am a little biased. I keep about 40-50 chickens in my various coops. I raise them from chicks, feed them, watch over them, and even sing to them. “Close to You” by the Carpenters is a favorite of theirs. I even name them, so it would probably not surprise you to find that, although I eat chicken, I would never be able to eat one of mine. So, I do get a little irked when chefs talk about chicken dishes as being boring. I would turn it around and say boring chefs make boring chicken dishes.

Chickens were domesticated about 7,000-10,000 years ago and were considered a delicacy by the Roman Empire. Although they stuffed and cooked their birds, they were also known for their mashed chicken brain dishes. Some farmers were even known to fatten their chickens with wheat bread soaked in wine. This practice was deemed by the Senate to be a sign of the decadence of the times and rendered the practice to be illegal.

Roosters were bred at this time for fighting in most of the so-called “civilized” world because there was no television in those days. I can assure you that anyone who claims that it is in a rooster’s nature to fight one another, I can tell you that I have ten roosters that are not aggressive to me, anyone who visits, or each other. Only Fred, my Serama rooster, will nip at me if I come home and do not say hello to him or if he wants to be picked up. I feel a rooster, if allowed to do rooster things like protect the flock and help make little chickens, should live a happy life and grow to an old age before dying and becoming a delicious chicken stew called Coq au Vin. I love the dish, but not with my guys.

Okay, this is the point where I realize my article took a turn away from being about great chicken dishes and went toward my experience of raising chickens. This is not an uncommon occurrence. People who raise chickens as pets are mostly like this. We can talk for hours about our tiny backyard companions. We can chat about their health, what we feed them and when, what we put in their water, and how they look like tiny dinosaurs as they run across the grass. They have a great deal of personality, and most chicken owners will tell you the hour or two a day they spend with them is the best part of their day. Oh, yeah, and the eggs are better than anything you can find in a grocery store.