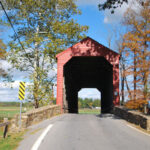 By TheCatoctinBanner.com On December 1, 2022 · Add Comment · In Arts & Entertainment

Thomas Hamilton walked across the Loy’s Station Covered Bridge, ignoring the wooden beams around him. He focused his attention on the other side of the bridge, where the sky was clear and the sun shone. It stood in stark contrast to the thick fog on the side of the bridge he had just left.

He reached the other side and shook his head. It was a cloudless summer day in Rocky Ridge. It wasn’t even overly hot. He looked across Owens Creek and saw that it was now clear. The fog had lifted in the time it took him to walk across the bridge.

He couldn’t see the old man who had encouraged him to cross the bridge and find the love of his life. How could the man have walked away so quickly that he was out of sight? Thomas looked back across the bridge, wondering if the man had followed him, but it was empty.

He shook his head. This was turning out to be an unusual day. First, his girlfriend had broken up with him via a text message. Then, he had met the old man with his message that Thomas would find the love of his life on this side of the bridge. And, finally, Thomas had seen the odd fog that had moved in quickly, stayed on one side of the creek, and disappeared just as quickly.

The woman he had seen walking across the field was closer now. She was an attractive redhead who had her hair tied up in a kerchief. She wore overalls and work boots. He had grown up in the same house his father had grown up in. He thought he knew just about everyone in the area, but he didn’t recognize this woman.

“Where did you come from?” she asked.

Thomas shrugged. “I just walked across the bridge. You had to have seen me. You were looking right at it.”

“I must not have been paying attention. It was clear and then, suddenly, you seemed to be standing in front of it.”

She looked him over and then her nose wrinkled. Thomas realized he must still be sweaty from his run.

“Sorry about that. I was running earlier.”

“For exercise.” She looked at him like he was crazy and stepped back. “I don’t recognize you. Do you live around here?” he asked.

“All my life. You’re the one who’s not from around here.”

“Of course, I am. My name is Thomas Hamilton. I live out on Old Mill Road.”

“I know the Hamilton Farm, but not a Thomas Hamilton.” There was only one Hamilton Farm on Old Mill, and it was his family’s farm. The woman cocked her head to the side. “You don’t look like a farmer. You look like someone dumped a can of fluorescent paint on you.”

He looked down at the reflective vest he was wearing. He didn’t think it looked that unusual, and it helped protect him from getting hit when he ran.

“You should talk. You look like someone trying to imitate Rosie the Riveter.”

“It doesn’t matter. What’s your name?”

She raised her chin and glared at him. “I’m not sure I should say.”

“Whatever.” He had been crazy to give that old man any credence. This woman was the love of his life? Not likely.

He turned and walked back across the bridge. When he reached the other side, he still didn’t see the old man, but other things were different, too. The road wasn’t paved. It was macadam. And the playground in the park off the right was gone.

He hadn’t thought things could get weirder. He was wrong.

He jogged back to his house to shower and change. Even the house looked different, particularly when he walked inside. All of his furniture was missing, replaced with the type of stuff he would see in an antique store. Wallpaper, not paint, covered the walls. He smelled ham cooking when he knew he had left nothing in the oven.

A woman screamed, and Thomas spun around. She had walked out of the kitchen, her face red from the heat from the oven and stove.

“What are you doing in my house?” she shouted.

“I–I live here,” Thomas said, even though he wasn’t sure of that any longer.

“You do not! This is my family’s house. Leave this instant before I call the police.”

“But this is the Hamilton Farm. I…” He was about to say “I live here” again, but while the house itself might match his home, these furnishings and the wallpaper all said someone else lived here and had for some time. Certainly, longer than the hour Thomas had been out.

The woman ran back into the kitchen and came back with a rolling pin covered in flour. She waved it at him.

Thomas held up his hands and backed toward the door. Once he stepped out onto the porch, the woman slammed the door, and Thomas heard the lock engage.

He sighed and walked back down the driveway to the road. He headed toward MD 77, although he wasn’t sure what he would do when he got there. Something unusual was happening, but he had no idea what it was.

He walked along the road toward Rocky Ridge when a vintage truck pulled up alongside him.

“Need a lift?” the driver asked. “I’m headed to Thurmont.”

Thomas didn’t recognize the man, but he had friends in Thurmont who might help him, or worst-case scenario, that’s where his doctor’s office was located.

Thomas climbed into the truck bed, and the driver started off. A confused Thomas looked over the countryside. He recognized the landscape and many of the buildings, but others were different. It was like he was in Rocky Ridge, but not his Rocky Ridge. It became very obvious as they entered Thurmont. The two elementary schools, police station, and housing development on the east side of town were all missing. The truck pulled over to the side of the road and stopped across from the middle school, which now had a sign that said it was the high school.

The driver hopped out and said, “This is as far as I go. I have to arrange for some lumber.”

Thomas jumped out of the bed to the ground. “Thanks. I appreciate the ride.”

He walked toward the center of town. He grew more nervous with each step. This was all wrong. He stopped when he saw a sign in the window of a clothing store. “New Styles for 1951 Are In!”

Thomas staggered and had to lean against the wall. It couldn’t be, but in the back of his mind, he had been seeing the signs and ignoring them.

Look for what happens next in our January issue