President Howard Lewis (Class of 1960), who replaced the late Don Dougherty as president, served as master of ceremonies.

The ceremonies opened with the singing of the “National Anthem,” followed by a delicious meal, served by the Thurmont Ambulance Company.

Eugene Long, Class of 1944, was the oldest in attendance. The person traveling the longest distance was Barbara Davies Watts from Fort Rose, Texas.

Recognition and thanks are extended to the many businesses who donated door prizes for the banquet. Next year’s banquet will be held on June 13, 2020.  Anniversary years will be those ending in 5 and 0.

The Thurmont High School Alumni Association will hold its annual banquet on Saturday, June 1, 2019, at the new Thurmont Event Complex, located at 13716 Strafford Drive, just off of Lawyer’s Lane, from Route 550 South of Thurmont.

Social hour will begin at 5:00 p.m., with the meal served promptly at 6:00 p.m. The classes ending in 4 or 9 will receive special recognition. Several basket raffles and a 50/25/25 raffle will take place.

Six graduating seniors, related to Thurmont High School Alumni, will receive $1,000 scholarships. The cost for the evening is $23.00 per person, which should be mailed to Viola Noffsinger, 12510 Creagerstown Road, Thurmont, MD 21788 (before May 16).

All alumnus of Thurmont High School and Catoctin High School classes (1969-1972), and friends, are encouraged to attend.

By TheCatoctinBanner.com On January 28, 2019 · Add Comment · In Community News

Through a wintry mixture of sleet and snow, locals from around the Catoctin Area poured into the Thurmont Event Complex to show love and support for the Thurmont Ambulance Company during its annual banquet on January 18, 2019.

Friends, families and volunteers of the Thurmont Ambulance Company braved the icy conditions to honor and recognize the people who dedicate their time and energy to answering calls for help 365 days a year.

Food was served, laughs were had, and awards were given for several individuals who go above and beyond for citizens in need around the area. Among those recognized, a few could not make it due to the snowy tundra that blanketed the Catoctin Mountain, but the snow did not stop President Lowman Keeney from reading their names and praising their services in their absence.

The Rocky Ridge 4-H Club served the dinner for the banquet, providing everyone with a variety of delicious foods and desserts to accommodate even the pickiest of eaters. The lines for food piled up, with guests collecting around the mashed potatoes, green beans and fried shrimp.

As the 4-H kids made their rounds providing refills and entertainment for guests, President Keeney took the stage to bring attention to the banquet and give thanks to all who made the event possible.

As everyone began to settle in, bellies full and eager for things to begin, Keeney started with introductions and a welcome.

“I want to thank you all for being here despite the conditions outside.” Keeney said. “There are a few of us who could not make it tonight, but we still appreciate the all of the contributions they have made.”

Many people had and continue to have a helping hand in making the Thurmont Ambulance Company the smashing success that it is, but Keeney identified a few key players who make the company what it is today.

Chief Dennis “DJ” Ott, Judy White, Joyce Stitely, Dennis Ott, Sr., Jim Wolf, Shirley Stackhouse and the company’s top responder Jenn Frushour all got special thanks among several others for the work and efforts made for the ambulance company.

Across all members, 46 responded to calls in 2018, providing Catoctin Area residents with fire and EMS aid at all hours of the day. Of the 46 responders, one stood above all others in time dedicated and calls ran.

The ambulance company responded to 1116 EMS, 50 fire and 92 non-emergency calls over the course of 2018, continuing to stay busy each and every day. “We had an average response time of seven minutes,” Chief Ott said. “Ideally, we’d like to get that to five, but that’s something we’re working toward.” With an average response time of seven minutes and a total call time of 87 minutes, it’s easy to see just how much time some of the staff and volunteers are pouring in to help the community.

“We have a great group here, but we’re always looking for more help and more EMTs,” Chief Ott said.

The operational awards went off without a hitch despite absences from a few key members. President Keeney presented Dennis Ott, Sr. with the President’s award, highlighting his contributions to the community of Thurmont and all its people. “He takes an hour to get from Thurmont to Emmitsburg, but he’ll always be there for you,” Keeney joked.

A memorial service soon followed in honor of two close members who passed away in 2018 and made a significant impact over the course of their lives.

Two candles were lit by Shirley Stackhouse for the memorial service to symbolize the eternal place Russell “Lee” Fisher, Sr. and Diane Oxendale have with the Thurmont Ambulance Company. Fisher passed away in April of 2018 and Oxendale passed in June 2018.

After a moment of silence and a prayer for those we’ve lost rang through the Thurmont Event Complex, the focus shifted to the naming of the 2019 administrative and operational officers.

The 4-H Club members made their rounds once again, handing out raffle tickets to everyone in attendance, with the crowd eagerly awaiting to hear their ticket called to get one of several awesome prizes. The ambulance club had gift baskets filled with fruits, several bottles of wine and gift cards to a select few lucky winners.

The raffle wrapped up the event and capped off another successful Thurmont Ambulance Banquet, but each speaker made it clear that the contributions made by those honored do not go unnoticed or unappreciated. A sincere thank you goes out to all EMS providers in the area for your service and dedication.

Without your time and efforts, our community would not be the same.

(above, right) Despite the wintry weather, a significant crowd attended the annual banquet.

(left) One of many awards presented, Dennis Ott, Sr. presented an award to Judy White.

By TheCatoctinBanner.com On June 28, 2018 · Add Comment · In Community News

The annual Thurmont High School Alumni Banquet was held June 2, 2018, at the Thurmont Event Complex. Alumni president, Don Dougherty (Class of 1969) served as the master of ceremonies. Audrey Ecker Coe, Class of 1940, was the oldest in attendance. She first attended alumni banquets in 1933 at the age of nine. She would tap dance and sing. Ironically, Audrey’s great, great nephew received a scholarship.

Addison Eyler sang the “Star Spangled Banner,” and Larry Freshman read a poem he wrote about growing up in Thurmont. 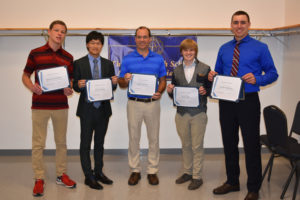 The Thurmont High School Alumni Association will hold its annual banquet on Saturday, June 2, 2018, at the new Thurmont Event Complex, located at 13716 Stratford Drive, which is just off of Lawyer’s Lane, from Route 550 South of Thurmont. Social hour will begin at 5:00 p.m., with the meal served promptly at 6:00 p.m.

The classes ending in 3 or 8 will receive special recognition. Several basket raffles and a 50/25/25 raffle will take place. Five graduating seniors, related to Thurmont High School Alumni, will receive $1,000 scholarships.

Questions, special reports, or other information may be sent to vmnoff@gmail.com or call 301-898-9898.

By TheCatoctinBanner.com On January 30, 2018 · Add Comment · In Community News

On Saturday, January 20, 2018, the Thurmont Community Ambulance Company held its annual awards banquet in the new Thurmont Event Complex on Strafford Drive in Thurmont. A wonderful meal was graciously prepared and served by the young volunteers of the Rocky Ridge Progressive 4H Club. A fun time was had by all, while celebrating all of the individuals who work so hard and sacrifice so much to serve the community.

The ceremony started with an address from President Lowman Keeney. Following an introduction of the honored guests, Keeney went on to thank the members of the ambulance company for their service and sacrifice. “Our community is one big family. We do the best that we possibly can with the amount of calls, volunteers, and equipment that we respond to every year.”

Chief Dennis “DJ” Ott then delivered the Chief’s address. He summed it up in fourteen words: “Nothing’s changed; It’s all the same. We do the same thing day-in and day-out.”

Over the course of 2017, their vehicles traveled 46,328 miles, they ran 803 medical calls, and received 288 trauma, 44 fire, and 112 non-emergency calls. Chief Ott then reported on the magnitude of Colorfest and the staff and resources necessary to accommodate the crowds that attend. “Eighty-six patients and six transports in two days—that is the busiest two days we have to deal with. We accomplish that by staffing four ambulances, two medic units, two ATVs, and four first-aid tents. It takes about twenty-two individuals to continuously cover the operations of that. It makes us a lot of money, but causes me a lot of headaches with paper work.” He went on to acknowledge those who are currently in training and those who have completed training in EMT, EVOC, Fire 1, Fire 2, and paramedic school.

Some of the highlights of 2017 included sending two ambulances to Washington, D.C. for the presidential inauguration. They also provided coverage for the lifeguard challenge at Cunningham Falls Park, the Rocky Ridge Carnival and Guardian Hose Company Carnival, the Frederick Fair, and the demolition derby. They also attended the parades for Guardian Hose and Rocky Ridge, Thurmont Community Fun Fest, and the Town of Thurmont’s open house, in addition to various sporting events. This was the Company’s first year attending the National Fire Academy for Sons and Daughters’ Day. It was a busy year, to say the least. “This year is no different than last year. We are busy and we keep getting busier. We increased our calls by 200 and volunteer numbers are dwindling. We are going to keep moving on and doing the best we can.”

Following a presentation and report by Venture Crew 270, awards were presented. Individuals were recognized for their operational and administrative support: Jenn Frushour (304 calls), Rose Latini (176 calls), Brooke Kennedy (127 calls), Cole Mercer (118 calls), and Renae Coolidge (85 calls) were recognized as being the Top Five Responders. Chief Dennis “DJ” Ott presented the Chief’s Award to Brooke Kennedy. She joined in November of 2010, then became an EMT in 2011. Once she started training, she never stopped! She completed several classes, including Fire 1, Hazmat, rescue tech, EVOC, and Fire 2. She has held a line officer position for two years. She has put in countless hours to serve the Thurmont Ambulance Company and the community as a whole.

In addition to the Operational, Administrative, and Chief’s Awards, another prestigious award was granted. President Lowman Keeney presented Jim Wolf with the President’s Award. Jim Wolf is a former certified EMT and has served in different aspects and held many roles and responsibilities for the Company. He has served on the board of directors and contributed numerous hours for the Company.

Delegate Kathy Afzali was also in attendance. On behalf of the Frederick County delegation, she presented Chief Dennis “DJ” Ott and President Lowman Keeney with an award, recognizing the Thurmont Community Ambulance Service for serving the health, welfare, and safety needs of Northern Frederick County and the community for over fifty years, while responding with fast, professional, and well-trained teams.

Congratulations to each and every award recipient. Regardless of whether one is operational, social, or administrative, it takes everyone to make the department run. As Chief Dennis “DJ” Ott said, “We are here as one big family, and this is what we love to do.” 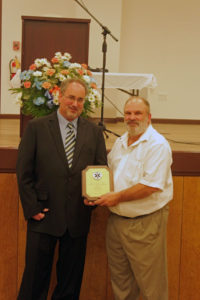 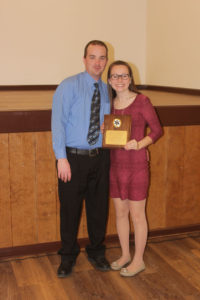