By TheCatoctinBanner.com On April 28, 2022 · Add Comment · In Community News

This year, the Friday night Opening Ceremonies Program will begin at 6:30 p.m. (note the new start time for program), with the community organizations flag ceremony, followed by the 2022-2023 Catoctin FFA Chapter Ambassador announcement. The annual Baked Goods Auction will begin immediately following the program at approximately 7:30 p.m. The Grand Champion and Reserve Champion cakes, pies and breads will be sold at 8:00 p.m.

Entertainment events on Saturday, September 10, at both 1:00 p.m. and 2:00 p.m. in the auxiliary gym, will include a martial arts demonstration by the Thurmont Academy of Self Defense; at 2:00 p.m. in the auditorium, the Linda Elower Studio of Dance will have a performance; and at 6:00 p.m., Richard Troxell, Thurmont native and tenor soloist, will have a musical performance in the auditorium. All entertainment and events throughout the weekend are free.

The 48th Annual Catoctin FFA Alumni & Supporters Market Goat, Beef, Sheep & Swine Sale will be held on Saturday night, September 10, at 7:00 p.m. in the agriculture center area. All buyers are welcome to attend and purchase animals at the sale, which are exhibited by 4-H and FFA members.

On both Saturday and Sunday, the petting zoo will be held in the agriculture area, and there will also be face painting and pony rides.

On Sunday, September 11, activities begin in the agriculture center area at 9:00 a.m. with the Dairy Goat Show, followed by the Dairy Cattle Show.   The Decorated Animal Contest will begin at 11:00 a.m., with prize money to be awarded to participants.

A Pedal Tractor Contest (for children ages 5-10) will be held at 12:00 p.m. in the agriculture center area tent. At 1:00 p.m. will be the 41st Annual Robert Kaas Horseshoe Pitching Contest near the softball field.

If you would like to be a new advertiser in the Community Show’s booklet, please contact Rodman Myers at 301-271-2104 to obtain advertising information. Past advertisers should have recently received letters for this year’s advertisements, with a May 17, 2022 deadline. By early August, the Community Show booklets will be available in local Thurmont, Emmitsburg, and surrounding area businesses. New and all residents of our community are urged to enter exhibits (no entry fee) and be a part of the Thurmont & Emmitsburg Community Show, the largest community show in the State of Maryland. Departments include: Fresh Fruits, Fresh Vegetables, Home Products Display, Canned Fruits, Canned Vegetables, Jellies & Preserves, Pickles, Meats, Baked Products, Sewing & Needlework, Flowers and Plants, Arts, Paintings & Drawings, Crafts, Photography, Corn, Small Grains and Seeds, Eggs, Nuts, Poultry & Livestock, Dairy, Goats, Hay, Junior Department, and Youth Department.  Please visit their website for updated information at www.thurmontemmitsburgcommunityshow.webs.com.

By TheCatoctinBanner.com On August 31, 2021 · Add Comment · In Community News

The Livestock Show will be held at 9:00 a.m., with awards presentation at 6:30 p.m. and the livestock sale beginning at 7:00 p.m. Please come out to the livestock show and sale and support our 4-H and FFA youth exhibitors.

On Sunday, September 12, the Dairy Goat & Dairy Cattle show will begin at 9:00 a.m., and the Decorated Animal Contest will be held at noon.

The Log-Sawing Contest will also be held on Sunday, September 12, at 1:00 p.m., which will have women’s, men’s, and children’s divisions. There will be various food vendors available to purchase food on Saturday and Sunday.

Next year’s Thurmont & Emmitsburg Community Show will be held on Friday, Saturday, and Sunday, September 9-11, 2022. Exhibits can include any item that has been made since the 2019 Community Show, except for baked products and any perishable items.

By TheCatoctinBanner.com On October 27, 2017 · Add Comment · In Featured Articles

The winners of the Decorated Animal Contest were: Champion—Laura Dutton (Ketcup and French Fries – goat); and Reserve Champion—Caroline Clark (Eat More Chicken – sheep). The judge of the decorated animal contest was Tess Hahn of Sabillasville. Each of the contestants received a ribbon and prize money will be divided among each of them. 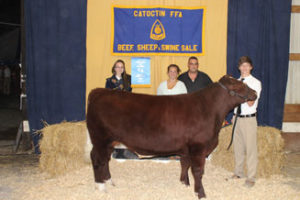 Pictured from left are Catoctin High School’s FFA Ambassador Stephanie Moreland (left), with the buyers of the Grand Champion Steer that was shown by Austin Ridenour (far right).

Judges for this event were Jim and Barbara Mofffatt of Mount Pleasant, Maryland, and Chairmen were Dave Harman and Dave Johnston.

Food coupons from Roy Rogers, Taco Bell, and Kentucky Fried Chicken were given to those participating and spectators. The Thurmont Feed Store, LLC donated pet food for the event.

The winners of the Decorated Animal Contest were: Champion—Peyton Davis (Sheep); Reserve Champion—Laura Dutton (Goat). Other participants included Olivia Dutton (goat). The Judge of the Decorated Animal Contest was Emma Main, Regional Operational Manager of Mid-Atlantic Farm Credit, located in Frederick, Maryland.  Each of the contestants received a ribbon, and prize money will be divided among all of the contestants. 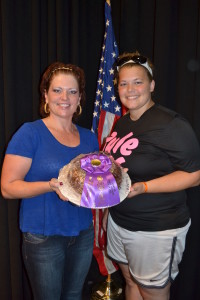