The History of Orchards in Thurmont with Elmer “Lee” Black

Lee and his wife, Frances, came up to Thurmont from North Carolina to make his funeral arrangements. He had purchased grave sites at Eyler’s Valley Chapel years before. He seemed excited that this would be a beautiful place to be put to rest. Lee’s grandson is a mortician in Westminster. Lee said he sat down with him and went over the whole process and costs. He said, “It’s all planned out. I want a natural stone out of the mountain. I found one where I used to live. John Kinnaird will engrave it.”

Elmer “Lee” Black was born January 31, 1923, near Thurmont. He was the son of the late Willis G. and Maude Baker Black. He had a brother, Harry, and a sister, Betty. Due to the untimely death of their father when Harry was 16, Lee was 14, and Betty was 12, they all learned to work hard to help their mother during the 1930s when times were tough.

Many days were spent picking green beans at the Zentz Farm (now Rodman and Bobby Myers farm). Lee and Harry built a small chicken coop to raise and sell chickens and eggs. They took care of several bee hives to get honey for themselves and sold or bartered it. They cut, split, and sold cords of wood during the winter months for some income.

The boys would trap and skin small wildlife to get money for the pelts. When trapping skunks, you had to keep the skunk’s feet off the ground or it could spray. Lee remembered one time, when he was getting a skunk out of a trap, he held it by its tail while working the trap, but accidently got its back feet back on the ground and, got sprayed!  When he got home his mother had to scrub him down in vinegar and tomato juice to get the smell off of him!

When Lee was a kid in the 1920s and 1930s, there were two places to get fruit around Thurmont. The first was a big orchard owned by Hooker Lewis on the hill behind where Cozy stood and before the highway went through. That land is now developed. About the same time, Johnny Kelbaugh had an orchard where Gateway Candyland is now. Harry Zentz was known for making cider at the time. Lee said that before he was born, most farmers and homesteaders had a small orchard of their own.

After graduating from Thurmont High School in 1940, Lee enlisted in the Army Air Corps. While serving with Headquarters Squadron 21st Air Service Group, he served as a photographer. During WWII, he was sent to the Asiatic-Pacific Theater, and was stationed in Australia and then New Guinea. He took thousands of photographs from the ground and air for Public Relations and History Reports in locations from New Guinea to Tokyo.

Discharged in 1945 after earning the rank of Staff Sargent, Lee then started a photography business in Thurmont and Emmitsburg.

Lee met his wife Frances, at the Monterey Tea House on New Year’s Eve. She was born and raised in Baltimore City. She said, “My prudish and strict mother left me with my promiscuous aunt and she took me along to a drinking place.” Frances was 16 at the time, Lee was 10 years her senior. Within three months, they were engaged and married. The year was 1949.

With a chuckle and glance at his wife, Lee said, “We’ve been together ‘off and on’ for 67 years.” This comment earned him a thump on the shoulder from his ‘Fannie’. Still smiling, he added, “I’ve had interesting things happen to me.”

Wanting to spend more time outdoors, Lee and Frances bought Hooker Lewis’ Strawberry Field in 1950 and started Blacks Hilltop Orchard. Hooker Lewis had several little orchards around Thurmont. Lee said, “During World War II and right after – nearly everyone who had an apple tree could make money from it. But after the war, you had to be good at making an orchard to stay in business.”

Lewis’ Orchard, Pryor’s Orchard, and the original Kelbaugh Orchard were the main orchards in the area. Over the years, different people bought parts of Kelbaugh’s Orchard. Russel Flanagan, who had been a mason, quit and went into the orchard business. Right after the war, Hooker Lewis’ son-in-law opened an orchard that is now Pryor’s Orchard. Galen Pryor of today’s Pryor’s Orchard is a great-grandson.

Lee enjoyed the independence of owning an orchard. All of his and Frances’ six children – two girls and four boys – worked the orchard by picking and thinning fruit.

Ira Kelbaugh, son of Kelbaugh Orchard’s originator, Johnny Kelbaugh, originally planted the orchard along Kelbaugh Road. Lee’s brother, Harry, worked for Ira during the war. When Ira semi-retired, he told Harry he would sell him the orchard. For years, Harry took care of the orchard for half the profit and eventually bought it.

This purchase included the road-side market that was very small at the time. Lee said, “When Kelbaugh first started, he didn’t sell fruit along the road. It wasn’t until the highway came through that the market (a smaller version of today’s Catoctin Mountain Orchard Market) was built around 1948.”

The two brothers, Harry and Lee, now owned orchards. Harry said to Lee, “You take care of the picking, and I’ll take care of the selling.” Lee reminisced, “We added pick-your-own black raspberries that he (Harry) raised and strawberries that we raised. There were a lot of problems along the way, I’m sure he disagreed with me and I disagreed with him, but we never had an argument.”

A regional University Of Maryland Extension man named Charlie Dunbar told Harry to build a retail market and to pack baskets with “good fruit!” Most fruit stands or “hucksters” at the time would place seconds (bruised or spotty fruit) in the bottom of a basket and top it off with good fruit! Lee and Harry used good fruit throughout and that is how it made both of their farms successful businesses.

Lee said there wasn’t any place that sold good peaches and apples between Thurmont and Washington, D.C. So, when they first opened, they had more business than they could handle. People canned at the time and would load up bushels at a time. The biggest apple growers were in Adams County, Pennsylvania, but, Lee said, “That fruit was all bruised up — the workers didn’t care.”

Business was up and down because of the economy and the weather. Lee said that at one point the orchard business was so bad that they started to raise broiler chickens.

Blacks Hilltop Orchard was, and Catoctin Mountain Orchard still is, known as “conservation showcase” orchards. Harry’s family and Lee and Frances’ family worked closely with the State of Maryland to implement smart ideas. In doing so, things changed with orchard procedures and standards.

They started to grow smaller trees to save on costs of picking and spraying; while they always used pesticides of some sort, the pesticides became more effective and made better; over time, the types of fruit were made stronger and more vibrant in color. Lee did some budding on trees, but didn’t do any genetics like the Catoctin Mountain Orchard Black family (Harry’s son Bobby’s family, Harry’s daughter, Pat) does today… 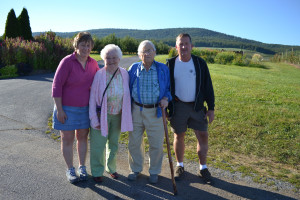