The Supermarket Gourmet Looking Back – 1758 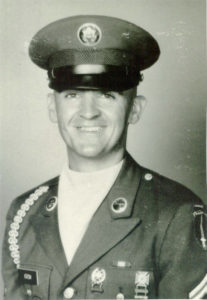 Author’s Note: I originally wrote this article about Kenny Krom in July of 2012. I interviewed his mother, Betty; his brother, Ronnie; and high school friends, Gary Valentine and Gerry Orndorff. I am sorry to report that Kenny’s mother, and brother, Ronnie (they were the last of the immediate family), and Gary and Gerry have all passed on in these past seven years. I think the folks that missed the article when it was first published should have a chance to read about the first local casualty of the Vietnam War, who graduated from Emmitsburg High School.

The following are “Precious Memories” from Kenneth’s family about his life before the Vietnam War.

Mrs. Krom is eighty-eight years of age and totally independent. She still drives to church on Sunday, does her own grocery shopping, and goes to the pharmacy for her medicine. She also mows her lawn—and she has a very large lawn. Mrs. Krom recently had back surgery and still uses a walker to get around. She said as long as she can get on the tractor seat, she can mow. She resides in Walkersville, but said she misses living in Emmitsburg.

Mrs. Krom said that when Ken was born on August 8, 1947, at Annie M. Warner Hospital in Gettysburg, Pennsylvania, the hospital was the size of a large two-story house. She said Ken was a very good baby, and she had no problems raising him. He had a normal childhood, playing with his friends and going to school. He was a person who would do anything for you. He did well in school and tried to be the best at whatever endeavor he chose—whether it be scholastic, shop class, or sports. Mrs. Krom said Ken had one brother, Ronnie, who was two years older than him, and aside from the usual sibling rivalry, Ken looked up to Ronnie. Ronnie had a bread route while he was in high school, and when Ronnie had to give it up, Ken took it over.

Ken’s first vehicle was a black Corvair van that he used to deliver bread after school. She said he would pick up the bread at Smith’s Bakery in Ladiesburg, Maryland, and deliver it house-to-house to his customers. She said he also worked for Lawrence Basler, doing farm work while in high school.

Ken graduated from Emmitsburg High School with the class of 1965. Mrs. Krom said that he then went to work for a construction company, helping to build the brick plant at Rocky Ridge. After wrecking his black Corvair van, he bought an old brown panel truck to drive to work. His next job was with Moore Business Forms in Thurmont, where he saved enough money to buy a blue 1966 Chevelle convertible that was his pride and joy. He really took care of that car. He worked at Moore’s until he was drafted. He was engaged to Marie Devilbiss, but never made it back to marry her.

During our interview, Mrs. Krom was getting tired and having a hard time talking about what happened to Ken in Vietnam. I knew recalling a tragedy that happened almost forty years ago may take a toll on her, so I thanked her for talking with me and promised I would return the pictures she loaned me.

Ron was in the U.S. Army, stationed in Japan, where he was part of a military police unit. His tour of duty was almost over when Kenny was drafted.

Ron remembers Kenny as an almost-always positive, fun-loving boy. They grew up in a loving, close-knit family. He and Kenny fished a lot and played along the Monocacy River, which ran very close to where they lived. A lot of their childhood was spent swimming and fishing. They would dip for suckers at Stony Branch. The nearest neighbor lived about a mile away, and they would go to their farm to play. The kids would find eggs in the hay loft, where the bantam chickens laid them. They would have egg fights, and Ron said they would really sting when they were hit in the face. He recalled that being boys and being brothers, Ron and Kenny would get into scraps, and Kenny—even though he was younger and smaller—was a tough kid to handle. He said that Kenny would win some, but even if Ron won, he lost, because he would be in trouble for picking the fight and have to cut weeds for two or three days as punishment. Kenny loved driving tractors. Any job having to do with a tractor, he would always want to drive the tractor. He would haul sawdust from Smith’s Sawmill in an old cart that was ready to fall apart. Ron can remember himself, Ken, and the neighbors playing baseball in his Uncle Jim’s field and using cow patties as bases. Ron said that they both also played baseball for the Rocky Ridge Progressive 4-H team. They played their games mostly at Thurmont Middle School and West Frederick Junior High School.

Ron said Kenny never did any homework for school, but always managed to pass his school tests and pass from grade to grade without difficulty. He had plenty of energy and loved to play school sports, and also liked weightlifting. Ron said that after his grandfather passed away, he and Kenny would take their grandfather’s car down in the meadow and pop wheelies.

Ron and Kenny had lots of fun together, but the time was far too short. He said that the last time he talked to Kenny was in South Carolina in April of 1968. He was at home in Walkersville when the call came from the U.S. Army about Kenny being a casualty. He said that his whole family was in shock. Kenny’s body was sent to a funeral home in Thurmont. There was to be no viewing of the body, but their father, Guy Krom, insisted on the viewing since he wanted to see for himself that it was, indeed, Kenny. The funeral director tried to talk Guy out of it to no avail, and Ron accompanied Guy when he went to view Kenny. Ron said his father was never the same after the viewing. He lost his father in 1983 to cancer.

Gary remembers Kenny as quite a character. He was funny, intelligent, and a very giving person. He said Kenny liked the Three Stooges and frequently would do his Curly impersonation, which he would do perfectly. Gary said he was fun to be with, and Kenny spent a lot of time at Gary’s father’s (Richard Valentine) farm. They lived about a mile apart and spent so much of their time along the Monocacy River, fishing and swimming, that they became known as the “river rats.” They played, but they also had daily chores to get done before playtime. Gary and Kenny were in the graduating class of 1965. The last time Gary remembers seeing Kenny was at the drive-in movies in Bridgeport, Maryland. Gary joined the U.S. Air Force and was stationed in Japan.

Gary found out about Kenny when he called home and his dad told him Kenny got killed. Gary said, “It kind of let the wind out of my sails.”

He said he never got hooked up with him overseas. Gary was there and used to do a lot of island hopping and would go in-country (that was what Vietnam was known as to the vets), taking fruit and vegetables in and filled aluminum boxes out. He said that was known as the quiet ride. Gary was in Japan when Kenny was killed. Thank you, Gary, for the memories.

Gerry remembers Kenny as a kid who was always fun to be with. After Kenny got his driver’s license and took over Ron’s bread route, Gerry used to ride along and help with the deliveries. They did a lot of fishing and gigging at night and got a lot of fish and frogs. They practically lived at the river when they were young. They didn’t have any money to do anything, and even if they did have the money, there was nothing to do in the rural area, so their river excursions were very pleasurable.

When Rocky Ridge had a festival, Gerry said they would get a quarter from Dad to buy a bottle of pop. He said he was with Kenny when the transmission from Kenny’s van dropped on his trigger finger. After that, he could not bend it. Gerry thought that would keep Kenny from being drafted, but the Army said he could use another finger to pull the trigger. According to Gerry, Kenny also had a trick knee that would give out when he was playing ball, and sometimes, just walking. Kenny passed the Army physical exam, despite his problems. Kenny was proud to be in the U.S. Army and was determined to make the best of it. Gerry was devastated when he got the word of Kenny’s death. Thank you, Gerry, for talking to me.

I talked to several friends and classmates of Kenny, and it seems they all basically have similar memories and feelings about him. I am proud to have had the opportunity to talk to the family and friends of the kid who went to Emmitsburg High School, graduated with the class of 1965, grew up and was drafted into the U.S. Army, became Sergeant Kenneth Lionel Krom, and made the ultimate sacrifice for our country.

Kenny Krom, a hometown boy, became a true hero in every sense of the word forty-four years ago.

Army of the United States

The only graduate of Emmitsburg High School to lose his life in the Vietnam War.