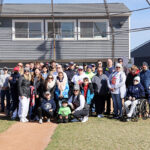 Baseball is officially back at Thurmont Little League (TLL). The four TLL majors teams kicked off the spring season by participating in the annual Garel Hauver Memorial Tournament, hosted by Brunswick Little League. Despite the frigid temperatures and mixture of wind, rain, and even snow over the course of the two days, each team was able to pick up at least one victory over their competitors. The TLL Angels and Orioles went undefeated on the first day, and both advanced to the semifinals on day two. Both teams fought hard against tough teams from Brunswick, and ultimately, the Orioles would advance to the championship game, where they finally ran out of steam and finished as the overall runner-up. Regardless, it was an extremely impressive achievement, and everyone at TLL was proud of their effort and the way they represented Thurmont Little League.

After months of planning, opening day arrived on Saturday, April 2. After soggy weather forced the cancellation of our games and several activities in 2021, the league was determined to make this year’s celebration bigger and better then ever. Those who attended know that was definitely the case. The complex was full to the brim, with people parking and walking from blocks away to attend the festivities. The day started off with several T-ball teams taking the field for their first games of the season. Despite some windy weather during the first few games of the morning, the sun peeked out for the first time in what seemed like ages and made for a beautiful day to celebrate.

Once the first slate of games were completed, a welcoming address was made by League President Robbie Nash, who kicked off the league’s 71st season. Robbie expressed how thankful the league was for the tremendous outpouring of support the league receives on a yearly basis. This year was no exception, as TLL had the highest number of registrations ever, at over 330 players. In an effort to help with crowd control due to these massive numbers, the league held dual ceremonies again this year. At 10:00 a.m., players from the T-ball and instructional divisions were introduced, along with their coaches and team moms. The second round of introductions were held at 3:00 p.m. for the minor, majors, and softball programs.

Next up, was a bit of a somber moment, as the league paid tribute to our Chief Safety Officer, Chris Morlan, who passed away in December after a lengthy battle with COVID-19. Chris was an extremely dedicated member of the TLL family, serving on the board for many years and volunteering as a manager at almost every divisional level. He was always there to help out whenever needed at any of the league’s events, from tournaments and parades to our movie nights and trunk or treat. As TLL kicked off a new season, it was hard to envision Chris not being there to be a part of it, and although he may be gone, he will certainly not be forgotten. Every TLL team will wear a special patch on their jersey this year in honor of Coach Chris.

The Morlan family was invited on to the field to line up along the first base line with many of his brothers from local fire departments joining them. President Nash then welcomed two of Chris’s long-time team members, Chase Cregger and Brody McQuay, to lead the players in reciting the Little League pledge. Next, his mother, Gina Morlan, was invited out to lead everyone in the Parent/Volunteer Pledge. Gina has been a fixture in the TLL concession stand for many years and has also helped with several other events, so she was the perfect choice for this responsibility. During the second ceremony, Sheriff Chuck Jenkins recited the pledge before wishing all players good luck during the upcoming season. On hand to throw out the first pitch for both ceremonies were several of Chris’s children. Son, Bodhi Morlan, and daughter, Abby, performed the duties during the first ceremony, while his older sons, Patrick and Nathan, handled the second. Afterwards, the family was presented with a memorial plaque, commemorating Chris and everything he meant to the league.

Finally, members of the Thurmont Cub Scouts took the field to present the colors before the singing of our National Anthem. This year, it was performed by Thurmont Middle School student, Alaina Furry, who honored our country with a beautiful rendition. Alaina has two brothers who have played baseball at TLL for many years, and she was excited to represent the TLL family. To close the ceremony, Robbie thanked everyone for coming and also recognized the many volunteers and board members who made the event so successful.

After the ceremonies, families and players stayed around to enjoy delicious BBQ by The Sauced Savage, who sold completely out by the end of the event. New this year was ice cream and sandwiches from Glamourview Creamery, who brought a smile to many faces with the size of their cups and cones. And, as always, there were other tasty items from the TLL Concession Stand. The brand-new popcorn machine was a big hit among the youngsters in the crowd! Many vendors were on hand throughout the day. Pivot Physical Therapy, Crucible Performance, Thurmont Cub Scouts, Thurmont Library, and CYA Football had tables to provide information about their services.

Other highlights of the day included a photo booth, complete with balloon archway and fun photo props; meet and greets with Keyote and The Oriole Bird; and Facepainting by Elizabeth, who had a line stretching across the parking lot. Additionally, equipment from the Frederick County Sheriff’s office and many local fire and ambulance companies were there for players to explore and get their pictures with. All in all, it was a wonderful day, with lots of fun for everyone who took part.

Fundraising is always a big part of the opening day ceremony, and this year was no exception. The community showed up in a big way to support the league this year, as the basket raffles and spiritwear tables generated over $13,000 for the league. People were excited to get their TLL t-shirts, hats, and hoodies, and to take a chance at one of the 25 wonderful prizes. The Grand Prize was a custom-made Thurmont Little League cornhole set, generously donated by TLL parent and Coach, B.J. Schildt. The winners were Trevor and Meghan Swain. The league would like to thank all the local businesses that donated to our baskets; without this support, we could not have generated the interest and raised the money that we did. To view a full list, please check out the Thurmont Little League page on Facebook.

The next big event will be the hit-a-thon on May 14, which is the largest annual fundraiser for the league and helps to raise money for uniforms, field maintenance, and everything else the league needs to make a great experience for its players and fans.

Be sure to check out the next edition of The Catoctin Banner for a recap of that event and all the other happenings from around the Thurmont Little League.

Members of the Thurmont Cub Scouts take the field to present the colors.

Keyote and The Oriole Bird are shown with a TLL fan on Opening Day.