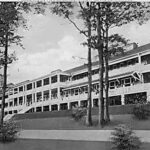 By TheCatoctinBanner.com On August 31, 2022 · Add Comment · In Arts & Entertainment

Tim Ross looked at the body Frank Larkins and the other orderly loaded into the truck bed. It was the same man. Paul Donofrio. He had spoken a few hours earlier about recovering from tuberculosis. He had praised some sort of secret treatment Dr. Vallingham, the assistant director of the Maryland Tuberculosis Hospital in Sabillasville, was giving him.

“The man who was getting the secret treatment I told you about.”

Frank turned to stare at the body. “Are you sure?” Tim nodded. “He was a good guy. I liked him, and he seemed to be getting better. I thought they might send him home.”

“I didn’t run any tests on him, but he was looking a lot better than he had been when he first came here last year. He had better color and was gaining weight.”

“Was he getting aspirin?” Tim had discovered that was virtually the only medicine that patients received at the hospital. The main therapy was rest and fresh air.

Frank shook his head. “Not that I know of.”

Paul Donofrio had been getting better and had seemed fine at breakfast. Now, he was suddenly dead. Even if the treatment hadn’t been working, Paul shouldn’t have died so quickly. It didn’t make sense.

“Are they going to autopsy the body?” Tim asked.

“No, we’re going to put the body in a coffin and send it out on the evening train.”

Frank shook his head. “No. People here die from TB.”

“That’s what Dr. Vallingham wrote on the death certificate.”

That was a surprise. “Has he seen the body?” Tim asked.

Tim sighed and shook his head. “Something’s not right.”

Frank loaded the body and drove away to wherever he needed to go. Tim watched him leave. Then, he turned toward the administration building. He thought he could see Dr. Vallingham standing at the window of his second-floor office, but it could have been his imagination.

So, if Paul had been getting a secret treatment, where would he have been getting it? Dr. Vallingham wouldn’t have wanted to meet with him openly. At that moment, Tim remembered the beds on the second floor of the laboratory.

He headed back across the campus and up the hill to the two-story stone building. When he arrived, he found the door was still unlocked. This still surprised him, having come from Baltimore where people locked their doors out of necessity. Inside, he walked around the tables that were filled with test tubes, bottles, Bunsen burners, and the other things one would expect to see in a place where medicines were prepared. He wasn’t sure what he was looking for. Did he expect to find a bottle labeled “Secret Treatment”?

He walked upstairs to where the beds were. Here, he found a cabinet filled with vials. He picked one up and held it up. The fluid inside was light green. Was this the treatment? He slipped it into his pocket.

A small desk sat in one corner. He walked over and looked through the drawers to see if he could find anything useful, but they were empty. Then, he looked over at the three beds with straps that would restrain whoever lay on the bed. This had to be where Dr. Vallingham administered his treatments, but he didn’t see anything he could definitely point to as being sinister.

Tim spun around and saw Dr. Vallingham standing at the head of the stairs with his special orderlies. He wore his tweed suit and seemed out of place in the room.

“You were told specifically that you were not allowed in this building. It is a reason for dismissal from the hospital, which is what I will do. It is time for you to leave the hospital. You are not a good fit here.”

“Who is a good fit, though, for your special treatment?”

“I told you that there is no special treatment,” Vallingham said.

“That’s not what Paul Donofrio thought.”

“He died from tuberculosis.”

“Did he? You signed the death certificate without examining him.” When the doctor said nothing, Tim said, “Maybe I should leave. I need to get in touch with his family and encourage them to have a doctor autopsy his body. I imagine if it turns out that Paul died from anything other than TB, the authorities will have questions.”

Vallingham took a deep breath and rubbed the bridge of his nose. “I am only trying to help people, Mr. Ross, and I have been making progress. If I have a few setbacks along the way, that is the cost of research.”

“Easy for you to say when you aren’t the one paying the cost.”

“I am. My reputation is on the line.”

“But not your life.”

“No, but perhaps yours.” Vallingham stepped back. “Strap him down. We’ll see how the next iteration of the serum works.”

The orderlies stepped forward. Tim backed off, looking for a weapon. He could grab the chair, but he could only hit one orderly before the others swarmed him. Then what would happen? Tim wasn’t sure he wanted Vallingham’s special treatment.

Tim grabbed the wooden chair and swung it back and forth, trying to ward off the orderlies. That was the best he could do. He didn’t have much of his strength anymore. One orderly grabbed the chair and yanked it out of Tim’s hands, tossing it off to the side. The other two closed in on Tim from different sides. Tim punched at them, but his jabs lacked power.

A group of half a dozen men rushed up the stairs with hoods over their heads. Two had bats and three of them had pistols.

“What is this?” Vallingham shouted.

“This man is a patient of mine.”

One man swung his bat at Vallingham’s stomach. It hit him, and he doubled over, falling to the floor. The orderlies moved forward, but the armed men pointed their pistols at them.

The orderlies released Tim. One of the men with bats grabbed Tim’s arm and pulled him away. They went down the stairs and out the door. They crowded into a truck Tim recognized.

“Which one of you is Frank?” Tim asked.

Frank took off his hood. He was driving.

“I saw you heading back here. Then, I saw Vallingham head out with his goons on my way back from the station. I figured that couldn’t be good.”

“Crap! That’s worse than I thought. I figured he was just doing some side work for money.”

Frank stopped the truck in front of the nurse’s building. He climbed out and took Tim’s arm.

“Come with me.” He turned to the other men. “They’ll be looking for the truck. Park it at the administration building and then disappear. Double the guards at the power house for now.”

The truck drove off.

Frank nodded. He took Tim into the building through the basement door. It was dark and smelled musty.

“We’re not supposed to be here, either, but every once in a while, a nurse and orderly will hit it off.” He nodded toward a bed in one corner. “You can stay here for now. They won’t look for you here.”

“What if one of the nurses reports me?”

“They won’t. They hate the way Vallingham treats them but stay quiet just in case.”

“We can try to get you out on the train, but Vallingham will probably have the orderlies watching it. I think we should call the police. We’ll have to move the still somewhere off into the woods.”

“Wait, what if you turn Paul’s body over to the police? We can tell them what is happening, and they can have a doctor autopsy the body. It should show that Vallingham was lying about how Paul died. You might not even need to move the still.”

Frank rubbed his chin and then grinned. “I like how you think.”