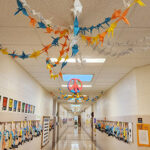 By TheCatoctinBanner.com On December 30, 2022 · Add Comment · In School News

This activity was part of a Kindergarten through eighth grade collaborative unit in art class. Karolyne Myers, the art teacher, facilitated discussions about promoting peace in our community and the world at large, including learning about the life and practices of St. Francis, peace symbols around the world, and acts of kindness.

The folded cranes hang from the ceiling (shown above) to greet visitors “like crane chandeliers,” according to sixth-grader Tyler Marshall. Many middle schoolers took on the additional challenge of folding the smallest crane they could. These are also on display.

The origami activity with middle school included a study of the short life of a 12-year-old Japanese girl named Sadako Sasaki, who succumbed to leukemia from the atomic bombing of Hiroshima. Sadako was an ambassador for world peace while she was alive. She attempted to fold 1,000 paper cranes before her death but was unsuccessful.

“Her story was tragic, but it was also inspiring,” said Moira Tayler, a seventh grader who participated in folding the cranes. “I hope our wish for peace will be granted.”