When Thurmont Police Officer Tim Duhan showed up at the town office on October 25, 2016, he thought he was there to recognize his fellow officers who had investigated the pipe bomb that had been planted on his police vehicle.

“They didn’t tell me why I needed to be there,” Duhan said. “The chief just told me to wear my class A (uniform).”

He was happy to go to recognize his fellow officers who had helped discover who had placed a homemade bomb on his car earlier in the year. However, after that recognition, the Thurmont Lions Club presented Duhan with their Police Officer of the Year Award. “It was unexpected, and a nice surprise, seeing as how I only expected to be there to support my department.”

Duhan has been with the Thurmont Police Department for four years. Before that, he had served as a police officer in Frederick City and a small department in Prince Georges County.

“Coming to Frederick from Prince Georges County kind of felt like we had left the city and come to the country,” Duhan said. “Moving from Frederick to Thurmont felt like that again. Things move slower, the volume of calls isn’t as much, and the crime rate is lower.”

Duhan actually retired in 2011, but after a year and a half, he said his wife told him that he needed to go back to work to keep busy. Duhan thought about it and went to see Thurmont Police Chief Greg Eyler. Duhan decided that he wanted to work with a police canine if he went back into policing, and he asked Eyler what the chances were. Eyler told him that he would have to make the proposal.

So Duhan became a Thurmont police officer. He also researched police canines and put together a proposal that he presented to the Thurmont Commissioners. They signed off on the idea, and Duhan was given Thurmont’s police canine.

Buddy is a two-and-a-half-year-old narcotics dog and Duhan’s near-constant companion. He is one of about a dozen police dogs that serve in Frederick County.

Buddy came to the department from Washington State in June 2013. It can cost around $10,000 to get a trained and certified drug dog, but Duhan knew a trainer who offered him a deal, which the town commissioners approved to give the police another tool to help fight the town’s drug problem.

When on the job, Buddy rides in the rear of Duhan’s vehicle, which is equipped with a heat alarm for Buddy’s protection.

Duhan said that being a police officer was something that he always wanted to do. He tended to be larger than many of the other kids with whom he grew up and pretty easy going.

“I never liked bullies, though, and if I ever saw someone bullying someone else, I had to step in.”

Although naturally inclined for law enforcement, he was told that he couldn’t become an officer unless he had military experience or a college degree. He joined the military in order to get that needed experience.

When he got out of the service, he became a police officer in Prince Georges County. Although his community was small, it was busy.

“It seemed like there was a car chase once a week, with drugs, shootings, and burglaries,” recalled Duhan.

When Duhan’s first child was born, he realized that he didn’t want her growing up in such a dangerous area. That is when he transferred to Frederick City and set up roots in Thurmont.

“I love Thurmont. It’s a great community. I go to church here and have friends. I know the people. When I stop a car for something, it usually turns out to be someone I know.”

He also noted that Thurmont has been a good place to raise his two children and that “Ninety-nine percent of the people here are good people.” 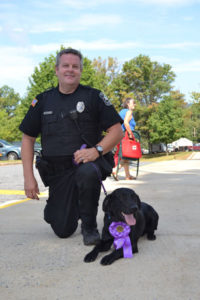