By TheCatoctinBanner.com On October 26, 2016 · Add Comment · In Community News

Ninety-year-old couple, George and Helen Deluca, of Thurmont, don’t look or act their age. Helen has been an active volunteer with the Thurmont Senior Center and a long-time contributor to The Catoctin Banner, and George, after his retirement, stayed busy delivering meals from the Thurmont Senior Center to the homebound, as well as helping at the local food bank. He also enjoyed selling tickets at the stadium for all the Washington Redskin games.

Having met in the seventh grade in Wanamie, Pennsylvania, they eventually became “high school sweethearts,” but that was put on hold when George was drafted into the Army and was deferred until he graduated. He served in the Glider Infantry 82nd Airborne. Shortly after his discharge, he and Helen were married on October 5, 1946, with the written permission of their parents, which was a requirement if the couple was under the age of twenty-one.

In 1951, following a visit to his brother who lived in Virginia, George and Helen, with their two daughters, decided to start their new life in a new area. They settled in Wheaton, Maryland. George went to work at Thompson’s Dairy, while Helen was a stay-at-home mom until their daughters started school. It was then that Helen began a twenty-year career with Giant Foods. When Thompson Dairy went out of business, George went to work with Montgomery County Liquor Control until he retired.

For their 70th wedding anniversary celebration on October 2 of this year, the Deluca’s daughters “went overboard” for their party at the Thurmont AMVETS, with dinner for ninety-four people. George said, “We had one big thing [party] and one big time.” This was followed by a family reunion the next day.

Helen shared the secret of a happy marriage: “Don’t give up when things aren’t going smooth. You don’t just walk away from a problem, you work it out. When we took our vows, that was back in the day where you didn’t take them unless you meant them. You knew that was the rest of your life.” Helen looked at George and added, “We just worked it out didn’t we? We’ve had a real good life.” 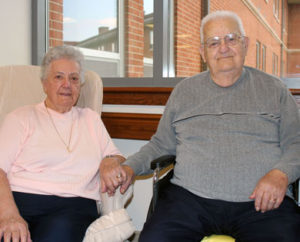 Helen and George Deluca of Thurmont celebrated their 70th wedding anniversary on October 5.