On March 7, 2015, members of Guardian Hose Company joined together to celebrate their accomplishments of 2014 during their annual banquet. Invocation was provided by Chaplin Rev. James Hamrick, followed by a home-cooked meal served by GT’s catering. Family and friends mingled until Wayne Stackhouse drew all attention to the podium, where he introduced special guests from other organizations who aided the company throughout the year.

Floral tributes were presented during the memorial service, in memory of Linda Duble, Franklin Keeney, and James Spalding, who all passed in 2014. The entire room bowed their heads while the Chaplin said a pray for the families who lost a loved one.

After the memorial service took place, Chief Chris Kinnaird shared the chief’s report with the audience. Kinnaird started off thanking everyone for their attendance, and for all of their support throughout the year.

“Our company volunteers 364 days of the year; this is our only night off. A huge thanks to Smithsburg and Walkersville Fire Companies for filling in.”

Kinnaird explained that it had been a very busy year. Guardian Hose Company ran 544 more calls than in 2013. Members partook in 528 hours of training, including Fire 1 and 2 classes. It was estimated that Guardian saved an approximate 1.8 million dollars in damage. On the average, eight volunteers respond to a call.

Kinnaird was proud to announce that this year every firefighter will be provided with a “Bail Out Kit,” which includes a 30-foot rope, carabineer, and escape hook. This will enable the firefighter to safely exit from a second-story window. Other expenses incurred included new tools, upgrades, and maintenance to the company’s apparatuses.

“It is better to be over prepared then under,” stated Kinnaird. “That’s a part of our job. We ride around in big tool boxes!” joked Kinnaird.

Guardian runs on three well-prepared engines, but could soon drop down to two apparatuses. The next big expense they foresee will be replacing one of the apparatuses, in roughly two to three years, which will cost approximately $500,000. Another change the fire company foresees will be overnight crews who will stay at the fire house, awaiting any calls that may come in during late hours. This will quicken response time to a call.

Wayne Stackhouse closed the evening with, “May you take a part of your company’s operation, big or small—it takes us all. Our company’s success will be measured by your efforts. All of your efforts are always appreciated.” 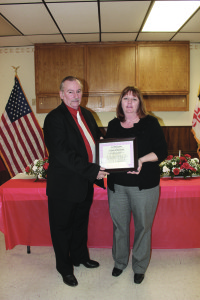 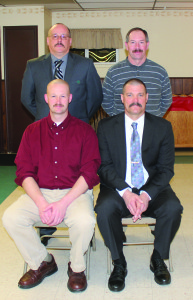 Pictured from left are: (back) Blaine Schildt and Will Gue; (front) Chris Kinnaird and Charlie Brown.