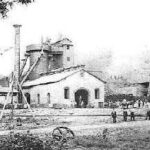 By TheCatoctinBanner.com On August 31, 2021 · Add Comment · In Arts & Entertainment

1: Master of the Flames

Meshach Hunt stood on the mound of earth until his boots began smoking. Then, he danced around yelling, “Ouch, ouch, ouch!”

Fifteen feet below him, his brother Abednego grinned, but he said, “Stop fooling around, Shack. We’ve got more logs to stack on the number three pile.”

Meshach was only a year younger than Abednego, but he might as well have been 20 years younger. He acted like jumping the stacks was a game of hot foot. They both knew stepping too hard in the wrong spot might lead to a hole that swallowed the collier up and dropped him into the fires smoldering beneath. Meshach saw it as a challenge. Abednego saw it as a danger.

Meshach stopped his jumping. He shifted the dirt on the mound with his shovel, covering the smoke hole. It was important to keep the air out and the heat in the mound. It controlled the burning going on beneath the mound. In another week, this mound would be a load of charcoal for Catoctin Furnace at the base of the mountain.

The furnace had been operating for decades, creating pig iron for stoves, utensils, and other things. The stone and brick stack was ever hungry, consuming 800 bushels of charcoal each day. Abednego wasn’t so good with his numbers, but a foreman at the furnace told him that to get that much charcoal, the woodcutters felled an acre of hardwood trees each day. They brought the trees to colliers like the Hunt brothers, who turned the wood into charcoal.

Meshach finished his inspection of the mound, while Abednego walked over to the pile of logs the woodcutters had finished delivering a few minutes ago. The number three stack would be ready to start burning tomorrow. This was the last load of logs needed.

Meshach and Abednego had spent two days preparing this mound. In the very center was a fagan, a pole around which the logs were stacked, and once removed, would create the chimney in the stack. Although the stack was already started, Abednego needed Meshach’s help setting the logs onto the stack.

Meshach finally climbed off the stack and came down the ladder. He walked over to his brother, and the pair carried the oak logs to the stack and then tilted them onto the other logs that formed the circular, cone-like structure. Then, they stepped back to look at the result of three days’ work.

The brothers had stacked 40 cords of 12-foot-long logs in expanding circles around a chimney flue. The chimney had already been stuffed with sticks and other kindling. Now, the colliers’ job would be to fill in the gaps between the logs with sticks. Then, they would cover it all with a layer of dirt.

Once that was done, they would remove the fagan, and the brothers would drop embers into the chimney to get a fire started in the center of the stack of logs. They would then let the logs slowly burn for two weeks. The dirt covering kept the air out so that they could control the burn rate.

After two weeks, they would open what remained of the stacks and spread out to cool like the number four stack was doing.

Seen from a distance, someone might have thought the collection of a dozen structures with smoke rolling from their tops was a small village. However, this village only had two residents. It was enough for Abednego. It had always been him and his brother since they were children. They didn’t need anyone else.

Abednego wiped off his sweat with the back of his arm. “Just in time for lunch,” he said.

Neither brother was married, although they were in their thirties. Abednego didn’t blame the women. He rarely saw them. Who would want to live in a shack on Catoctin Mountain? The only people the Hunt brothers saw regularly were colliers, woodcutters, and furnace workers.

They walked into their hut, which was a windowless room that resembled the stacks, except it had a doorway on the side.

They rinsed their hands in a bucket of water and ate bread, cheese, and apples for lunch. It wasn’t fancy, but it filled them up. They ate little hot food. Neither of them wanted to cook over a fire after tending stacks all day. They lived with a perpetual sheen of sweat, even in the winter.

Besides, they didn’t want to eat too much. No one wanted to feel heavy walking on a charcoal stack.

After lunch, the brothers raked the soil off number two stack to get at the cooled charcoal underneath. They shoveled the charcoal into the wagon bed, filling it up. Then, they tied a tarp over it. The trip down the mountain could be bouncy, and Abednego didn’t want to lose half his load before he reached the furnace.

When everything was loaded, Abednego climbed up into the seat.

“Want to come along, Shack?” he asked.

Abednego nodded, not surprised. His brother never made the journey to Catoctin Furnace. He was content to stay on the mountain and watch over the stacks. Abednego lived for the trips off the mountain to drop off coal at the furnace. It gave him an excuse to go into town and talk to people, especially women.

Of course, he understood Meshach’s position. Those fires burned for two to three weeks at a time, and someone needed to watch them to make sure they didn’t get too hot or go out. It just didn’t need to be Meshach who always did it. He seemed to sense how much Abednego looked forward to the trips off the mountain.

When Abednego reached the Frederick Road between Mechanicstown and Catoctin Furnace, he turned south. He smiled at a woman he saw hanging laundry on a line. He might have stopped to talk, but it was obvious from the laundry that she probably had a husband. Besides, Abednego knew he didn’t present well. He was covered in soot, as always, and smelled like wood smoke.

The furnace that gave the village of Catoctin Furnace its name was 32-feet tall, an impressive site amid all the nearby one-story buildings. A water wheel, mill pond, and races, a coal house to store charcoal, the bridge and bridge house to charge the stack, and a cast house were all nearby structures supporting the furnace operation.

Further away were the homes for the workmen, stores, barns, stables, and a church. Catoctin Furnace had hundreds of workers. Miners dug the iron from the ground. Lumberers felled the trees, and colliers prepared the charcoal from them. Fillers charged the furnace. Founders smelted the iron and cast it. And all of these people lived near the furnace, except for the colliers.

They stayed on the mountain with the stacks that had to be watched around the clock, even on Sundays. However, some colliers did work in shifts, so they could live at least part of the time in town. It was just easier for the Hunts to live near their stacks. They were used to living by themselves. It seemed like they always had.

Abednego unloaded the charcoal into the coal house, and then walked over to watch the men working the furnace. He could feel the heat from the fires burning the furnace 100 feet away.

He watched a pair of shirtless, sweaty men shovel charcoal into the fire to keep the flames burning hot enough to melt the iron ore, which was also in the furnace. This was the opposite of Abednego’s job, which was to control the fire and create a smoldering heat.

He stared into the tall, dancing flames, entranced by their undulations. He rarely saw the flames he worked with, and if he did, it was usually a bad thing. These flames devoured the charcoal, while Abednego’s flames savored the wood.

He reached a hand toward the flames and imagined holding it in his hand. He had held a burning coal in his hand for a short time once. It had seemed like a living thing as the light from the ember pulsed. It reminded him of a firefly. Then, it had grown too hot, and he had tossed it away.

He controlled the fire. He commanded it to do his bidding, and it did. He was the master of the flames.