By TheCatoctinBanner.com On October 31, 2018 · Add Comment · In Featured Articles

Former students of Emmitsburg High School met on Saturday, October 20, 2018 to celebrate class history, reminisce, and enjoy time together as the group congregated for another year of the popular reunion. The Vigilant Activities building in Emmitsburg, where the reunion took place, quickly filled as 191 attendees checked in at the front desk for a name tag. They were greeted by the familiar faces of Sam Valentine (Alumni Treasurer), Connie Fisher (Secretary), Betty Valentine, Joyce Bruchey (Historian), and Alan Brauer (2019 Vice President).

To open the event, Alumni President, Bill Wivell warmly welcomed guests and their families. Dinner was blessed by Bill Simpson, Class of 1941. As a tradition, Bill also led the Pledge of Allegiance, and sang an excerpt from “America the Beautiful.” Live entertainment was provided by local talent, Ronnie and Cheryl Carney (from Harney).

After a meal, the President introduced the honored classes — those that ended in either a three or an eight including the classes of 1938, 1943, 1948, 1953, 1958, 1963 and 1968. He also introduced former teachers of Emmitsburg’s High School, who included Betty Ann (Hollinger) Baker, Joyce (Meadows) Bruchey, Dorothy Arsenault, George Kuhn, and Marvin Laws.

Joyce Bruchey recollected, “Class of ‘68, do you all remember when you fed Mr. Corl brownies with laxatives?” The entire class roared out in laughter. Franny Brock defended their decision, explaining how Mr. Corl would always eat their candy, so they repaid him with a special treat.

Betty Mumma, class of 1958 shared some of her fond memories, and then thanked the Alumni Board for their efforts to make the reunions so successful each year.

After Joyce provided the classes with interesting tidbits of their history, she informed everyone that in the Emmitsburg Town Office, outside of the meeting room, there is a display case filled with Emmitsburg High School memorabilia. She invited everyone (or if they know anyone) to contribute memorabilia to add to the collection.

The Emmitsburg High School Alumni take great pride every year in providing a few lucky recipients of the high school descendants a scholarship to help with furthering their education. For 25 years, they’ve raised a total of $73,000. This year, the recipients of the scholarships were Allison Rippeon, Jessica Welty, Michaela Persinger, Stacie Baust and Myra Swiderski. All of the recipients were very grateful for the help.

During the class meeting, the alumni president offered an opportunity for alumni members to contribute with suggestions, changes and correction of the past year’s meeting minutes. This year a motion was made to vote on a change of time that the banquet would be held in the upcoming years. The suggested time would move the event to 1:00 in the afternoon, opposed to 2018’s 4:00 p.m. start time that had already been moved back from 5:00 p.m. in 2017. This year, a new Vice President was voted into the board, Alan Brauer of Rocky Ridge. Vice President Brauer served his class once before in high school as President in 1964.

Sam Valentine commented, “I think moving the banquet back by an hour really seemed to help the overall outcome of the event.” Also, new this year, members were able to see photos of past banquets on the large TVs that surround the activities building. The board plans to continue adding content to the slide show for attendees to see each year.

The Emmitsburg Alumni association works hard to make the multi-class reunion a success each year and provides the opportunity to see old friends and family, but most importantly, classmates. Like a big welcoming family, the Emmitsburg High School Alumni Association would like to extend future invitations to anyone who attended the school, whether they graduated or not. 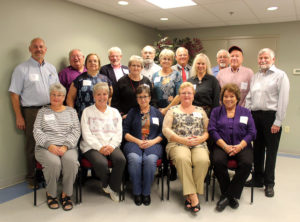 Pictured are members of the Emmitsburg High School Class of 1968 who were in attendance at the 94th reunion.