By TheCatoctinBanner.com On May 29, 2015 · Add Comment · In Business News, Community News, Recent News

Customers and staff at Melissa Wetzel CPA in Emmitsburg have topped last year’s record for collecting food donations in comparison to the annual numbers for the project that started in 2009.

“With 1,244 food items collected, it’s still catching on. Our goal is to beat the number of cans collected the year before,” said Melissa.

Customers of the accounting office are on board with the collections since they can get up to $5.00 off of their tax return preparation fee for bringing in five food items to support the Emmitsburg Food Bank. To take part in the benefit next year, please call Melissa at 301-447-3797.

This year, Melissa’s receptionist, Jill Ott, is retiring from the company. She started working for the CPA firm in 2008. For Jill’s years at the company and for her commitment, Melissa said, “Thank you for your years of service. You will be missed by all of the employees and our clientele.”

Melissa Wetzel would also like to include a “thank you” to their clients for making the food drive such a success each and every year. 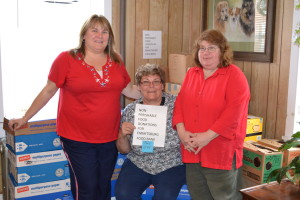 Golden Statue of Mary Gets Crowned

As hundreds gathered on May 3, 2015, on the grounds of the National Shrine of Our Lady of Lourdes Grotto at Mount St. Mary’s University in Emmitsburg, the golden 25-foot statue of Mary, which stands atop the 95-foot campanile and stands high above the campus, was crowned with flowers. The crown measured 12 feet in diameter and was elevated by a crane and placed upon the statue’s head.

The event celebrated the Catholic tradition of crowning Blessed Mother Mary with spring blossoms to recognize her model of faith and discipleship. The 12-foot crown was constructed by florist Will Stone, owner of Flower Fashions in Frederick, Maryland. 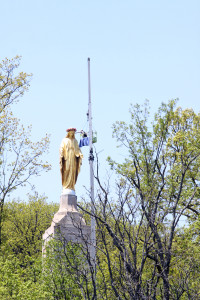 Just imagine a tree that is leaning, decaying, and dying, and it is only a matter of time before it falls over and lands on a building, car, road, and so on. So, what do you do if it is on your property?

Most people cut it down and then have the stump removed and the story ends there. However, Tom’s Creek United Methodist Church (UMC) had a different vision. They had a dying tree cut down to a ten-foot stump and then had it carved. They took something that was dead and/or dying, and they gave it new life. Even better, they turned to local artist and businessman, Jason Stoner, to transform it into a message of hope. A member of the church paid to have the stump carved into Jesus Christ, holding a lamb, sending the message of hope to the lost, the wandering, the hopeless, and the unloved. This dead tree that was resurrected to be a message of hope can be found at Tom’s Creek UMC (a couple of miles off of Route 140, by taking either Simmons Road or Tom’s Creek Church Road).

For years, the community has had a gold statue of Mary watching over the area, and, now facing her, is the carving of Christ. If you are out on a ride, stop by and see it. 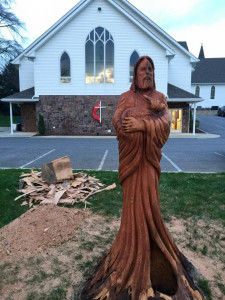 Local Artist Jason Stoner carved the stump of a cut down tree into a message of hope, outside of Tom’s Creek United Methodist Chruch in Emmitsburg.

Drop Your Change for Food

The Emmitsburg Food Bank was founded in the 1980s to help meet the needs of local residents in emergencies (fire, flood, accidents, illness, job loss, divorce, economic recession, job transition, etc.) and to assist citizens with the sustained low incomes.

This food bank serves about sixty families per month, and operates on donations of food and money from the community. The Emmitsburg Business and Professionals Association (EBPA) started a change drop box program several years ago, called “Change for Food.” The coordinator of that program, Bob Rosensteel, Sr., said that donations have been going down in the past year because other charitable entities are vying for change box donations. He wants to make sure donors know how much their contributions are appreciated by the food bank.

“Please tell everyone not to forget to drop one dollar per month in a Change for Food box. That one little dollar makes a huge difference!” said Rosensteel.

“Organizations, churches, schools, FEMA, and Mount St. Mary’s University have been very generous over the years. The EBPA’s Change for Food collection boxes that are seen around town in stores have helped greatly. Thanks to all of you,” said Kelly.

The Emmitsburg Food Bank requires proof of residence in the Emmitsburg school district area and a photo ID. While a driver’s license qualifies as a photo ID, it may not show a current address. Proof of residence may be in the form of a lease, a utility bill, a car registration, or a piece of mail addressed personally to the client. They will maintain copies of the documents during the calendar year. When a new year begins, clients must re-submit documents showing current address and a photo ID.

The Emmitsburg Food Bank’s policy is to help with food once a month, unless proof of greater need is shown by contacting Social Services in Frederick at 301-600-4575 for services such as Food Stamps, medical assistance, cash assistance, or Family and Adult Services (301-600-2635). They suggest that all clients apply for Food Stamps. If one is denied, they can bring the denial letter to the Food Bank and more help can be provided. They cannot give food from government sources more than once a month. The Frederick County food banks are linked through the Religious Coalition for Emergency Human Needs. One may not use more than one food bank—this is called “double-dipping.” It is unfair to others who are in need.

The Emmitsburg Food Bank has guidelines for the number of items from various food groups, based on family size. They have a “Help Yourself” section of items that don’t fit any category.

Don’t forget to drop your change in the Change for Food boxes at various locations around town! Contact the Emmitsburg Food Bank by emailing kellyphy82547@gmail.com. 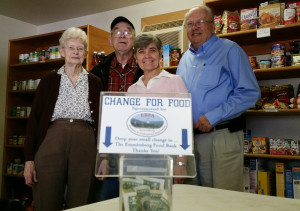