Town Hall Reports Not All Dinosaurs Were Huge, Some Were Shrimps

Wine, Cupcakes, and Art in Thurmont

It was a nice night for a stroll on the evening of May 8, 2015, and residents took advantage of the pleasant weather to come to downtown Thurmont for the Art & Wine Walk.

Ten downtown businesses shared their storefronts with local wineries, cupcake bakers, and artists for the evening. Visitors strolled along the streets and popped into the businesses to sample a locally made wine, snack on a gourmet cupcake, or speak with an artist. For instance, Gnarly Artly showed off his custom T-shirts at the Thurmont Bar & Grill, while Kathy Larson with Detour Winery offered samples to customers who stopped into Gateway Flowers.

“This is nice. It’s a nice event for the family,” said Dee Carr of Dearbought. She had come to the stroll to support an artist friend who was showing her work at the Creager House.

Mel and Joanne Goble came downtown just to see what the stroll offered, and planned to try to visit all of the stores that were participating.

“It’s a lovely night, and we’re enjoying seeing everything that is here tonight,” Joanne said.

For more information on any of the participants, contact vgrinder@thurmontstaff.com.

Kathy Larson with Detour Winery offered samples to customers who stop by Gateway Flowers during the Wine, Cupcakes, and Art Walk in Thurmont on the evening of May 8, 2015.

Paul Johnson received his first train set when he was seven months old. The train was set up around the Christmas tree as part of a Christmas train garden that Johnson delighted in every Christmas.

“I looked forward to it every year and when I turned eight, my father showed me how to set it up and take care of it. From then on, it was my responsibility,” Johnson said.

As Johnson got older, he saved the money that he earned from cutting lawns in order to buy new pieces for the train layout. His interest died off when he entered his teens. Like most teenage boys, Johnson found girls and cars more interesting than trains.

“I got interested again in my mid-20s,” Johnson said. “I had visions of a big layout that I wanted to build.”

His interest in trains remained a hobby until he retired from the U.S. Park Police after twenty years. He then decided to open Catoctin Mountain Trains and Hobbies, at 1 East Main Street in Thurmont.

“There was no place in Frederick County that sold trains,” Johnson said.

In its early years, the store had something for everyone. Johnson sold cards, games, puzzles, and other things.

“More and more people wanted the trains, though, so eventually that became the only thing we sold,” said Johnson.

After five years, the store moved to 3 West Main Street. The new store specialized in O-gauge scale trains, although they had some HO- and N-scale trains. Johnson also developed relationships with three men in the area who could repair broken trains. With Johnson attending shows and selling trains and pieces through mail order, the store’s reputation began growing.

“We’ve had customers drive here from two or three hours away,” Johnson said.

Although the Catoctin Mountain Trains and Hobbies was a local business, most of its customers came from out of town.

After twenty-five years in business, Catoctin Mountain Trains and Hobbies closed its doors on March 31, 2015, so Johnson and his wife, Marcia, could retire and enjoy some traveling.

“I enjoyed my time with the store,” Johnson said. “I met a lot of good people.”

While Johnson sold plenty of trains over the years to people across the country, he doesn’t have a large layout in his own home and he never built the grand layout that he had dreamed of in his mid-20s.

His most-valuable car is a Lionel model of a 1950 Hudson that still has its original box. Johnson said it is worth $3,500.

Now that he is retired and traveling, Johnson may even take some trips on the railroad. 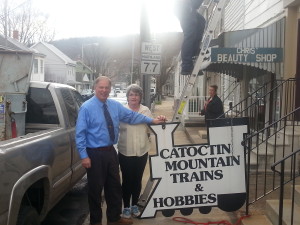 Pictured are Catoctin Mountain Trains and Hobbies owner Paul Johnson and his wife, Marcia, shown taking down the sign.

This May 19, 2015, photo shows the rubble of the former Cozy Inn Hotel. The tree in the foreground was removed later in the day. The gazebo still stood several days later but was removed.

The community observed as the former landmark restaurant and cabins continued to disappear as the days went by. 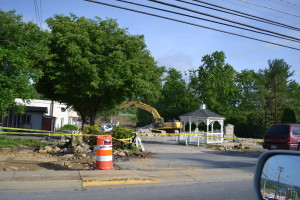 The day of June 6, 2015, will be the grand opening of Pam’s Rusty Treasures, next to the CVS in the Thurmont Plaza on North Church Street in Thurmont.

Owner Pam Garber had a similar store that she operated out of her house in Biglerville, Pennsylvania. She closed that shop when she moved back to Maryland (she’s originally from Emmitsburg).

Pam’s Rusty Treasures will carry primitives, candles, scents, and more. Pam operates the shop in memory of her husband, Rusty, who passed away from Melanoma ten years ago.