Town Hall Reports Everyone is Hiring 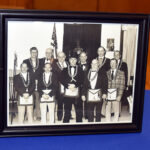 150 Years of Masons in Thurmont

By TheCatoctinBanner.com On October 1, 2021 · Add Comment · In Featured Articles

Parts of this article come from a 2015 Catoctin Banner article about the Acacia Lodge.

The world has changed drastically since 1871, yet freemasonry remains relatively the same with its traditions and goals.

“It can be difficult to imagine a world of 150 years past, the year 1871… a world so familiar to all of us, yet so far in the past that even our most common conveniences were unknown nor heard of,” John Hoke said during the Acacia Masonic Lodge’s sesquicentennial dinner in September 2021.

The dinner celebrated the formation of the Acacia Lodge No. 155 of the Ancient Free and Accepted Masons in Thurmont.

“We had Masons from every lodge in Frederick County and some from D.C. and Pennsylvania,” said Lodge Worshipful Master Rick Boyle. “We also had the Grandmaster of Maryland and some of his line officers with us.”

It was a special event. Not many Maryland lodges have reached 150 years of service. In fact, there was a time when the Acacia Lodge closed. Decreasing membership led to the lodge’s charter being revoked in 1881. It wasn’t reinstated until 1887.

It is no coincidence, though, that the Acacia Lodge formed after the arrival of the Western Maryland Railroad in Mechanicstown.

“Employees from the Western Maryland Railroad began to settle in the local surrounding areas of Mechanicstown,” Hoke said. “Many of these men were members of Masonic Lodges in other parts of Maryland.”

The Acacia Lodge was formed from the Columbia Lodge in Frederick. Thirteen Masons in the area formed the lodge in Mechanicstown, with Charles Lyon as the first Worshipful Master (lodge president). The new lodge’s first meeting was held on May 22, 1871, in a room on the third floor of the John Rouzer apartment house, opposite the Lutheran Church on Church Street. Besides choosing officers, it was decided to name the lodge the Acacia Lodge.

The Acacia Lodge was examined by other Maryland Masons in October 1871 to see if its membership was sufficient enough to support their own lodge, and on November 21, 1871, the Acacia Lodge was granted its charter. It met in the International Order of Odd Fellows Hall.

The Acacia Lodge continued to grow between 1872 and 1876, but for the next two years, many of the members found themselves working away from Thurmont. Because of the distance and the available forms of travel, many of the Masons couldn’t attend meetings.

This decrease in membership and activity led to the Maryland Grand Lodge taking back the lodge’s charter in 1881. Local Masons continued paying their dues and working to establish stability in their lodge. They applied for restoration of their charter in 1887, and it was granted on December 19.

“The lodge reorganized for work with all of its old members returning, and the lodge once again began to grow and prosper,” Hoke said.

One of the things that the members decided would help their stability was to own their building rather than continue to rent space. Beginning in 1894, the Masons, under Worshipful Master Leonard Waesche, began looking into buying the Bussard Building (where the lodge is currently located at 12 E. Main Street).

The lodge purchased the building in 1895 and began adding a third floor. The Masons also made repairs to the first and second floors of the building and began renting out the space. Over the years, the first two floors have been a livery, doctor’s office, post office, grocery store, drug store, beauty parlor, and more.

The third floor was completed in 1898, and the building began serving as the Acacia Lodge in January 1899.

When the lodge celebrated its first 50 years at the Thurmont Town Hall on November 29, 1921, only three of the original members were still living. They were George Stocksdale, Leonard Waesche, and David Martin.

The last tenant for the second floor of the lodge left in 1960. The space remained vacant until 1962 when it was decided to use the floor as the lodge’s social hall, which continues to be used for that purpose today.

Though generally believed to be a Christian group, Masons include many faiths. Each lodge has a book of faith on its central altar. The Acacia Lodge uses a Bible, but other lodges can include a book of faith for the predominant religion of the lodge.

“It doesn’t matter what religion you are, you just have to believe in a higher power,” Boyle said.

The Acacia Lodge is involved in many civic activities and participates in parades and building dedications. They can be identified in full regalia that includes tuxedos, top hats, and aprons. The local Masons dedicated the cornerstone of the Thurmont Library and have contributed money to many local efforts, such as purchasing a new flag pole for the town and paying for the memorial stone for servicemen in Memorial Park.

The lodge also offers an annual scholarship of $1,000 to a senior in the Catoctin High district.

The lodge is always seeking new members. If you are interested, contact a Mason. If you don’t know a Mason, visit the lodge’s website at www.thurmontmasons.com and send an email on the contact page.