By TheCatoctinBanner.com On June 30, 2022 · Add Comment · In Featured Articles

Rain or shine, the Thurmont carnivals are always a good time. June is an exciting month. You lose the brisk mornings, the temperature cranks up, and school is out for all of the kids.

June is especially exciting in Thurmont, with not one, but two, carnivals coming to town, giving people a much-needed injection of fun and excitement to start off their summer.

The Thurmont Community Ambulance Company’s annual carnival kicked off at the beginning of June without a hitch. With four days of beautiful weather and tons of great games, sunshine, rides, and bingo, it was almost impossible not to have a great time.

And, who can forget the fireworks! An event more than a millennium old, fireworks are still as captivating today as they were in ancient times. Thurmont Ambulance’s fireworks kicked off just as the light in the sky dimmed, and the finale was a sight to behold. Thurmont Ambulance Company’s Lowman Keeney said, “Our carnival was very successful this year with a gorgeous week and fireworks.”

The Annual Thurmont Firemen’s Carnival at the Guardian Hose Company Carnival grounds powered its way through some stormy weather, but that didn’t dampen the moods of excited families.

Despite some rain delays, the food was coming out hot, spirits were high, and the kids swarmed to the carnival attractions like bees to honey as soon as the clouds parted.

The Firemen’s Carnival is always highlighted by one of the most anticipated parades in Frederick County. And, for the first time since 2019, fire trucks, ambulances, and community members took to the streets to celebrate.

There was loud music, cheering, banners, and a whole lot of fun getting to see all the different people stroll through the main drag in Thurmont.

Good food and good music make for good times, and there’s been no better place to find it throughout the years than the Thurmont carnivals.

Cover Photo: Patty Phillips’ granddaughter, Lydia, holds up her winnings from the goldfish game at the Thurmont Carnival!

A brave rider takes on the infamous mechanical bull at the Thurmont Community Ambulance Company Carnival.

The kids coaster is one of the most popular rides for kids attending their first carnival or their tenth carnival.

A family takes a fun spin on the Merry-Go-Round.

A duo of carnival-goers race to blast a target with water with the hopes to win a stuffed animal.

Kids take a fun spin on the Scrambler.

Two boys shoot for a chance to win hermit crabs.

Guests flock to food stands as the carnival grounds open.

A group of kids are midair in one of the most adrenaline-pumping rides at the carnival.

The spinning swings are packed with kids looking for some high-flying fun.

By TheCatoctinBanner.com On July 1, 2016 · Add Comment · In Featured Articles

This year, the Emmitsburg Heritage Day Event was spectacular for visitors and town residents. The volunteers who worked on the Emmitsburg Heritage Day Committee planned all year to make the day a success. The weather was beautiful, the people were happy, and the fireworks were fabulous. Volunteer Jim Houck, Jr., said, “All (members) of our committee are truly dedicated to helping our community, especially the kids, enjoy a day of fun and games.”

Although it was originally an Emmitsburg Lions Club event, it is now a cooperative effort among multiple organizations. It is hoped that the festival will continue in the future with even more involvement from the community. Jennifer Joy, Heritage Day Committee chair, said, “It was a wonderful day because of the involvement and support of all of the town’s civic organizations, businesses, and churches that make this event possible each year. Through their generosity and commitment, we are able to provide fireworks (Emmitsburg Professional Business Association), parade (Sons of the American Legion), music (Knights of Columbus), food (SAL and Lions), field games (Lions), and kids activities (Christ’s Community Church) at the festival.”

Jim Houck and Mike Hartdagen coordinated the parade that followed the traditional route from the Doughboy on West Main Street to the square, then down South Seton Avenue. Houck boasted, “The turnout was great and we had some last-minute surprises in our line up.” The Parade was well attended and had more than forty organizations participate.  Most enjoyed were the ponies and the Harmony Cornet Band, who also regaled with their talents before and after the Memorial Event.

A beach week raffle was also held as a fundraiser for next year’s event, and the winner was local resident, Kendall Moore, from Pembrook Woods. Thanks to all who participated and congratulations to the Moore family!

At the Memorial event, all were touched by guest speaker, Brenda Sheaffer’s, story as someone with severe learning disabilities who struggled to make a living and be considered a contributor to society. With the help of Melwood, a non-profit organization, she has now been able to hold a position as a custodian at the National Zoo and the Auditors Building, before earning a security clearance to work at the White House complex. Also at the Memorial event, responders to Emmitsburg’s three major fires were honored and thanked for their service. Parade awards were given to “Best In” categories, and Art contest awards were given out to winners.

At the Bandstand, Miriam Warther of Fairfield, Synergy (a girl group from the Let there be Rock School of Frederick), Screaming Melina’s from Pennsylvania, and Jellyfish Jam Band (from Emmitsburg) entertained the crowd.

The Friends of the Emmitsburg Library held their annual book sale.  The Friends raised over $560 to support library programs and the Summer Reading Program.

Next year, the committee hopes to have a carnival and some additional attractions during the event. If anyone is interested in participating or getting involved in the planning of next year’s event, please contact Jennifer Joy at 301-447-6467 or Clifford Sweeney 301-447-1712 or email eburgheritagedays@gmail.com. 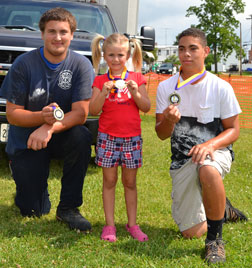 Brandon Burris, Savannah Phebus, and Jayson Howard were some of the game winners during Emmitsburg Heritage Day on June 25, 2016. 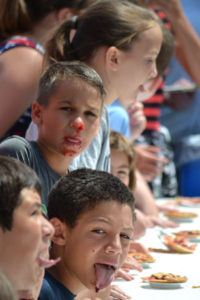 Participants in the Pie Eating Contest enjoyed the game and the sweets. 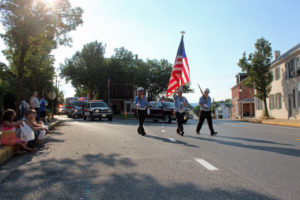 Around 5:15 p.m., families began lining the streets, eagerly awaiting the parade to begin, a much-anticipated event each year. 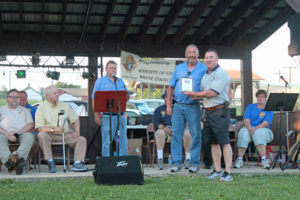 Emmitsburg Sons of the American Legion’s Mike Hartdagen presented the Vigilant Hose Company’s Jimmy Click with a plaque of appreciation for their quick response to the house fires in Emmitsburg this past year. 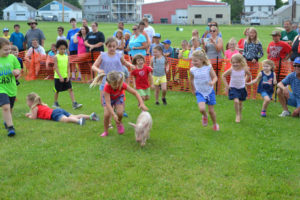 Group shot of some of the riders from Mid-Atlantic Off-Road Enthusiasts (MORE), who participated in the mountain bike group rides on the Multi User Trail on Community Heritage Day.