By TheCatoctinBanner.com On October 30, 2018 · Add Comment · In Community News

The Emmitsburg Council of Churches (ECC) enjoyed excellent participation and inspiring speakers at its first Community Unity Day, September 23, 2018. Addressing a large number of citizens, speakers at the event emphasized the importance of love and tolerance in direct opposition to the hatred and fear scattered by the carriers of racism and bigotry.

The Home Comfort Band provided bluegrass renditions of much-beloved hymns and songs. Their Psalms celebrating a loving and merciful God were appreciated.

Mark Long, Emmitsburg citizen and organizer, began the speaking portion of the celebration by welcoming everyone. Mark stepped forward to help organize the Community Unity Day in direct response to hateful literature left on the doorsteps of many Emmitsburg citizens. He recognized the speakers and government officials attending, including Emmitsburg Mayor Don Briggs; Thurmont Mayor John Kinnaird; town commissioners; county commissioners; and candidates for local office.

Pastor Richard Baker of Trinity United Methodist Church (UMC) welcomed everyone. He spoke about how his own denomination struggles with welcoming gay couples. He then offered the opening prayer for the unity celebration.

Mayor Don Briggs spoke about how important connection is within Emmitsburg. He shared about efforts to upgrade infrastructure and the community swimming pool, both of which build up and encourage community connections, to make the town a welcoming place for all persons.

The Rev. Jon Greenstone, President, Emmitsburg Council of Churches, and Pastor of Elias Lutheran Church in America (ELCA) spoke about the importance of countering the literature left by white supremacists on Emmitsburg residents’ doorsteps. He recounted the stirring history of Emmitsburg citizens standing up against slavery and bigotry.

The Rev. Bill Goal, Bishop, Delaware Maryland Synod of the ELCA, told how he has encountered racism in his own life as a parent of adopted biracial and African-American children. He provided ways to address “funny” racial remarks that are bigoted and hateful.

The Rev. Stacey Coles Wilson, Baltimore-Washington Conference of the UMC, spoke passionately of the history of racism and bigotry in the United States and the currents of change toward a diversity of humankind, united by love and tolerance.

Fr. Marty McGeough, St Joseph’s Parish, Roman Catholic Church, closed with prayer and loud Amens. The ECC will continue its efforts to demonstrate love and tolerance in Emmitsburg and beyond. 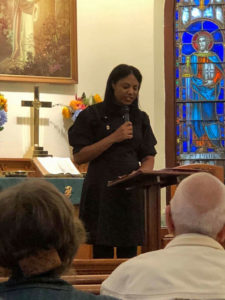 Rev. Stacey Coles Wilson, Baltimore-Washington Conference of the UMC, speaks of positive currents of change towards love and tolerance at the Community Unity Day on September 23, 2018.