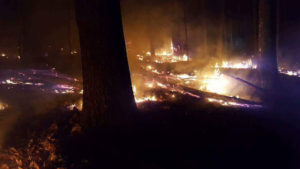 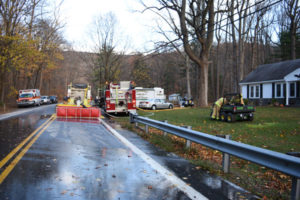 When we, or people visiting the area, think about the names of certain communities, thoughts jump to animals for being the origin. Why not think animals had an influence on the long-ago names? After all, back then, there were more animals than people populating the woods and meadows. But are these thoughts always right?

Wolfsville: It was a Wolf (Wolfe) by the name of Jacob who built the first house on the site of Wolfsville in Catoctin District, Frederick County, Maryland. It was Jacob for whom the place was named. He owned $3,100 worth of real estate and was a farmer (1850 Census). He married Catherine Main, and they had children. Jacob died in 1892 at the age of eighty-six, and lies buried in the old Reformed Cemetery (the church is no longer there) in Wolfsville.

One son of Jacob and Catherine Wolf, Samuel, was also a farmer. He rented until 1835, when he purchased 100 acres of farm and timber land from his father. He was one of the first to own and operate a saw mill in Frederick County, Maryland. In 1857, he disposed of his land and saw mill, bought seventy-five acres in Frederick City, Maryland, and moved there. 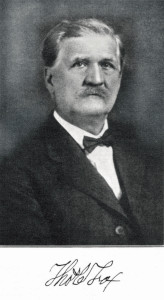 Foxville: It was a Fox (Fuchs).          George Fuchs moved to Frederick County, Maryland, when he was a young man. He bought a tract of timber land, located in what is now known as Hauver’s District, named it “Foxes Ranges,” and afterward, Foxville. He cleared part of his land and erected buildings. Then, he opened a store. He purchased more large tracts of land, on which he farmed and felled timber. He attended Apples Church in Mechanicstown (Thurmont), where records show some of his children were baptized. He donated land for the first Mt. Moriah Lutheran Church in Foxville in 1830, the congregation having been formed in 1829.

George Phillip Fox (son of George Fox) was born in 1795. He purchased part of his father’s land, built various buildings, and spent the rest of his life farming and felling timber. He was magistrate of Hauver’s District, and was one of the first judges of the district.

Thomas Cline Fox (son of George Phillip Fox), remained at home in Hauver’s District until he married Ruth Ann Buhrman. After marriage, in 1863, he bought a small farm and store from his father-in-law and became a successful farmer and merchant. Some years later, he purchased the historical Plantation in Foxville, together with the old Colonial Tavern where George Oats (later changed his name to George Hauver) put up his first tavern sign, on April 3, 1803. After George Oats (Hauver), the next proprietor of the tavern was a Mr. Need, followed by David Wolf. It was here that many celebrated, people were entertained, and political meetings were held and addressed by prominent speakers from distant towns. It was here, also, that farmers rested while on their way to and from Baltimore via Manahan Road with their season’s yield of wheat.

Thomas C. remodeled the old tavern by replacing the plaster on the outside with wood siding, making changes on the inside, and erecting a new barn and store. He then moved into the tavern and lived there until his death. This old tavern was, and is, located on the right side, before entering Manahan Road at Foxville. (The old tavern’s interior has been modernized in the past few years, and the barn torn down.)

Thomas C. was one of the directors of Citizen’s Savings Bank (since demolished) of Thurmont, and a generous contributor to the second and third Mt. Moriah Lutheran Church buildings. Thomas C. and Ruth Ann Fox had six children, four of which reached adulthood. After the death of Ruth Ann, he remarried Clara Marker. They had no children. Thomas C. died at the age of eighty-six.

In 1882, Foxville was a busy community with two stores, two schools, two churches, a doctor, a post office, a blacksmith, two carpenters, two shoemakers, and a constable. Foxville is located on Foxville Deerfield Road north from Route 77. The intersection is west of Cunningham Falls State Park and Catoctin Mountain Park. Mail is now delivered from Sabillasville, Maryland.

Beartown: It was a Bear (Baer, Bare, Barr, Bair, Bayer). This Bear family was of Swiss origin. Jacob T. Bear was born in 1783 in Pennsylvania. He owned land and lived in what was called “The Mansion House” (no longer there) at Beartown, Franklin County, Pennsylvania. He served in the War of 1812, married Elizabeth Grimm, and they had eleven children. He died in 1863 and was buried in Union Cemetery, Fountaindale, Adams County, Pennsylvania.

Jacob Daniel Baer (son of Jacob T. Bear) was born in 1844 in Beartown, Franklin County, Pennsylvania, the second son and seventh child in order of birth. He served in the Civil War. He enlisted in Company E, 126th Pennsylvania Infantry and was attached to the Third Division, Fifth Army Corps under Fitz John Porter. His first hard fought battle was at Fredericksburg, Virginia, where his corps lost half its force. He also participated in the battle of Chancellorsville. His term of enlistment had expired before the battle, but he prolonged the time to nine months and twelve days to cover this engagement.

Being discharged from the regular service, he for a time occupied positions in the Quartermaster’s department and in the commissary department, but desiring more active service he re-enlisted, this time in Company G, 17th Pennsylvania Cavalry, and was mustered in on August 24, 1864. He was then in the first Division, Cavalry Corps, under General Sheridan, and was one of the company who escorted Sheridan to the fort at Cedar Creek on his heroic ride from Winchester, Virginia. From here, he followed up Cumberland Valley, and at Gordonsville, he had a horse shot under him. His command reached Waynesboro, Virginia, too late to effect Early’s capture. From here, the cavalry was sent to join Grant at Petersburg. Jacob D. Baer was mustered out of service at Washington, D.C. and he returned to his home in Pennsylvania in June 1865. In December 1867, he married Anna Maria Miller, of Washington County, Maryland. Five children were born before they removed to near Bellwood, Butler County, Nebraska where Jacob D. filed a homestead claim in 1876. Six more children were born in Nebraska. (From a Butler County, Nebraska, newspaper.)

In July 1913, Jacob D. Baer returned to Waynesboro, Pennsylvania, for the semi-centennial observance of the battle of Gettysburg. A Waynesboro, Pennsylvania, newspaper, Blue Ridge Zephyr, published an article regarding his visit and comments he made. He said he was an orderly for General Sheridan at times, and once or twice he was the only soldier with the great cavalry leader.

An excerpt from the newspaper, mentioned that Jacob D. Baer was with General Kilpatrick.

“Mr. Baer, after the battle of Gettysburg, was on his way to Beartown, to help protect his people from the retreating confederates. A dozen confederates in blue uniforms captured him near Monterey and he and David Miller, of Clermont House, sent Miss Susan Lookabaugh to tell the late Chas. H. Buhrman of their capture…

Miss Lookabaugh walked past the confederate pickets about 3:30 o’clock. At dusk Kilpatrick’s men came hurrying along.

The confederates had a piece of artillery in the middle of the road in front of the Clermont house.

When the union cavalry appeared they loaded this with grape and canister and discharged it. The union troopers, however, rode on the side of the road and the shot went whizzing between them.

The confederates left without their gun…

Soon General Kilpatrick rode up and dismounted at the Clermont house. He spent time on the porch, in conversation with Mr. Baer, getting from him information as to the roads.

While thus engaged, a messenger from General Custer rode up and presented the latter’s request for more men. “Tell General Custer he has enough men. Tell him to lick h— out of them!” was Kilpatrick’s reply.

“I’ve got them, General,” was his salutation. He had cut to pieces a long line of Lee’s wagon train.

Beartown is located on Mentzer Gap Road, off of Route 16, west from Blue Ridge Summit, Pennsylvania. It has no post office. Mail is delivered from Waynesboro, Pennsylvania.

By TheCatoctinBanner.com On May 29, 2015 · Add Comment · In Community News, Featured Articles, Recent News

Yes, the Kuhns and the Wolfes were out for the Foxville School Reunion on May 17, 2015, at the school house. So were the Brandenburgs, Buhrmans, Hurleys, Willards, Delauters, Klines, and Clines, in addition to members of other homestead mountain families as students of the former Foxville School reminisced while enjoying a lunch of homemade fare. “The reunion has been held since 1986, and since that first gathering, 86 people who were present at the first reunion have passed away,” said reunion coordinator, Don Hurley.

Students shared stories about arriving early to fire up the wood stove; cutting firewood at the school to use when coal rations ran out; sneaky boys putting pencils in a girl’s braids; playing on a big log in the woods behind the school house; and shimmying out a window and running home to avoid staying after school (there was no mention of the escape the next day).

The students from Foxville continued to attend the Wolfsville School until the new Sabillasville Elementary School was built and occupied in September, 1965. Sabillasville Elementary School will celebrate its 50th anniversary this year with special activities this fall. The anniversary will also be honored at the opening ceremonies of the Thurmont & Emmitsburg Community Show in September. 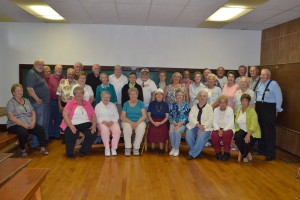 The photo was taken on the front steps of the Foxville School. 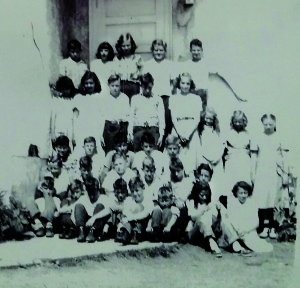