Twelve-year-old twins, Rianna and Sheridan Chaney, formerly of Thurmont, now call a 3,500-acre ranch in Gosper County, Nebraska, home. They’ll be appearing at the Thurmont Regional Library on Tuesday, August 9, 2016, at 6:30 p.m., during Starlight Story Time to share their experiences about ranch life, agriculture, and publishing children’s books. They, along with their mother, Rebecca Long-Chaney, have published seven (the eighth will be released this coming Christmas) children’s books that spread a love and respect for agriculture, each focusing on different aspects of agriculture.

Becky, who had already published a book, Bulldust in My Bra: An American Couple’s Working Season in the Outback, wrote the first three books from observing the girls around the farm and writing down things they would say. She explained, “For the next four books, the girls actually sat down with me and helped select photos, write the text, and even helped edit the books. We are a team.” She added, “I enjoy seeing the process of an idea to storyboard, to layout, to a finished product.
”
The twins were only three years old when Becky started taking photos. That fall, a Hereford cow had twins but would only nurse one, so the twins raised the calf on a bottle. Sheridan said, “It was a lot of work but we loved it.” Their first book was, “Little Star…Raising Our First Calf.”

With only two towns in the whole county where they live in Nebraska, these girls know more than a little about cows and life on a ranch. They live twenty minutes from a fast food restaurant or a Walmart; if they want to shop at Kohl’s, Best Buy, or the Apple Store, they have to drive for three hours.

At their school, the twins will begin the school year with twelve other seventh graders. Their entire school has kindergarten through twelfth grade in one building; each grade has one class of approximately fifteen students. The Chaney girls play volleyball on a club team; they also play softball and love doing livestock judging.

The Chaneys are part of a wonderful church family at Lone Star Cowboy Church. The girls are active in 4-H and go to Sunday School or youth worship on Wednesday evening rather than Sunday mornings. Many schools in Nebraska won’t let teachers give homework on Wednesday night because it is considered Christian night.

Most of all, the twins enjoy helping their father, Lee, move cattle or do something on the ranch. He works for Cross Diamond Cattle Company, which is a huge Red Angus cattle ranch (on which the Chaneys live), with a commercial cattle herd of about 350 cows.

Recently, he was teaching the girls to drive a ranch truck in the field while they helped him tear down fence. In Nebraska, rural kids can drive to school when they are fourteen years old.

In addition to their book projects, Becky enjoys substitute teaching for grades kindergarten through twelfth in three different districts. “This is a great way for me to get a little agriculture into the classroom.”

While touring around the book and agriculture circuits, Rianna said her favorite place to visit was the National Beef Convention in Tampa, Florida. “We got to promote our books for three days and have a side trip to Universal Studios at Disney.”

When asked about her favorite place, Sheridan said, “That’s easy. My favorite place was a road trip this past spring to a 35,000-acre ranch in Wyoming to do a photo shoot for the new book. It only took us five hours to get there. We stayed with the most awesome ranch family, and we can’t wait to go back.”

Come out to see Rianna, Sheridan, and Becky in August at the Thurmont Regional Library. They have a great passion for agriculture and would love to share “their ag story” with you. “My sister and I are doing the PowerPoint. We will have fun pictures of Branding day, show season, Nebraska cowboys and scenery, our winning Pig Wrestling team, cooling off in the big cattle tanks, and Nebraska’s most famous wonder: Tornadoes!” said Sheridan.

Becky added some shout-outs, “We are blessed to have a great support network with our books. First, Kelly Hahn Johnson takes many of the photos for the books. Kathy Stowers does the entire book layout, and Laura Keiholtz develops the professional lesson plans that go with every book for grades kindergarten through third. When books are published and big orders come in, Betsy Randall and Bonnie Chaney are my packaging and shipping team, because books are printed on the East Coast. I have a terrific team!”

“For the past eight years, our books have received several Ag Book of the Year honors. The books are in every state and in thousands of schools around the nation, thanks to Farm Bureau and Cattle Women’s groups. For more information, folks can visit our website at rebeccalongchaney.com,” said Sheridan, adding, “We are not famous people, but just ranchers trying to make a difference.”

Sheridan (left) and Rianna Chaney use sorting sticks to help keep calves back during branding day, while cowboy Marcus Eggleston goes to rope another calf to brand and vaccinate.

Rianna and Sheridan Chaney, formerly of Maryland, take a break with their ranching family on branding day at Cross Diamond Cattle Ranch in South Central Nebraska where they now live. 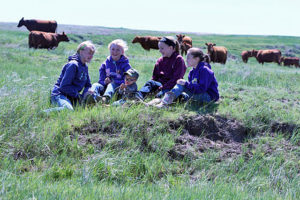 From left, are, Johanna and Marie Ford, Coltin Nation, Rianna and Sheridan Chaney.

The Chaney Twins’, Rianna and Sheridan, formerly of Thurmont, are coming home for a visit. They will be the featured speakers with a “special” PowerPoint that they have created about life on a 3,500-acre ranch in the middle of Nebraska, on Tuesday, August 9, 2016, at 6:30 p.m., during “Starlight Story Time” at the Thurmont Regional Library. This will be followed by a book signing.