By TheCatoctinBanner.com On July 27, 2017 · Add Comment · In Featured Articles

State championship marks only the second time Thurmont has won this prestigious honor in over sixty-six years. Read story on page 27. 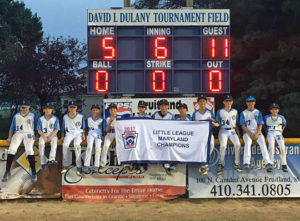 “This is a very special group of young men,” commented Ed Lowry, Thurmont Little League president and assistant coach on the team.  “Each of these boys accept their respective roles on the team, and are willing to do whatever for the greater good of the team. They represent our communities with such pride, dignity, and class, it’s just a privilege for our coaching staff to work with these fine young men.  The success on the field is great, but the comments we get about their character is even more rewarding.”

With this victory, Thurmont Little League has earned the right to represent the State of Maryland in the Mid-Atlantic regional tournament in Bristol, Connecticut, this coming August 5-12. All of those games are televised on the ESPN family of networks.  Thurmont will play their first game on Monday, August 7, at 4:00 p.m., versus the winner of the Pennsylvania/Delaware game. Our Banner readers can watch that game on ESPN3.

With this success comes some financial challenges for the team’s families. The team just recently spent the week of July 14-21 on the Eastern Shore in Maryland, participating at the State tournament. The families incurred a collective expense of nearly $19,000 to participate at the State-level tournament. “We were very fortunate to receive a donation from the Town of Thurmont in the amount of $1,500 to help offset some of the cost. Mayor Kinnaird and Board of Commissioners from Thurmont have been staunch advocates and supporters of our program over my tenure at Thurmont Little League. Other than their generous donation, our families picked up the rest of the expenses,” Lowry commented.

The road ahead doesn’t get any easier for Thurmont Little League, both on the field and making the preparations to get to the Bristol, regional tournament in August.

“Unfortunately, Little League doesn’t contribute to the expenses of the families to get to Bristol. It’s a real financial burden in some cases.  We estimate the expenses somewhere in the neighborhood of $15,000,” stated Lowry. Thus, the Thurmont Little League players and families are in active fundraising mode. If you would like to donate, you can do so via their “GoFundMe” page at: www.gofundme.com/11-12ThurmontAll-Star-s, or go directly to their website at TLLbaseball.com and click on the “donate” link.

“The great part about this is that everyone in the community can be a part of this. You will get to watch the team play on ESPN and know that your donation helped get them there,” said Lowry.  “We have adopted the hashtag #SmallTownBigDreams for this team, and I can assure you that this group of boys will make you proud to say that they are a team from your hometown community.” The Thurmont Little League 11-12 team leaves for Bristol on August 4.

The Thurmont Little League 9-10 All Star Team went 8-0, outscoring their opponents 104-19, to win the Maryland District 2 and Maryland State Championships. With the State Championship, they will be moving on to represent our communities, Maryland District 2, and the State of Maryland in the 9-10 Little League Eastern Regional in Cranston, Rhode Island, from August 8 through August 14, 2015. Each year, over eighty Little Leagues from across the state of Maryland compete to call themselves State Champion. In winning the State Championship, Thurmont beat South Caroline 10-2, Berlin 18-7, Marlboro 16-2, and Conococheague 17-5. With this honor comes a great cost to their families to provide the team a chance to compete at the Eastern Regional Tournament. As a result, Thurmont Little League is looking to raise $15,000 to help fund the expenses of the team as they represent the State of Maryland. All donations will go directly to the Thurmont 9-10 All Star team to offset the cost of competition and travel. Donations can be made by going to their website at www.TLLbaseball.com and clicking on the link to donate. These ball players greatly appreciate your donations by Tuesday August 4.

Please visit Thurmont Little League’s Facebook page for information and updates on the team’s status during the tournament.

The league would like to thank you for giving these talented boys the opportunity to further represent our great communities and the State of Maryland. 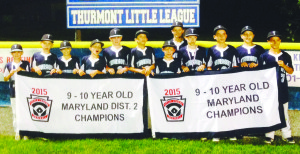