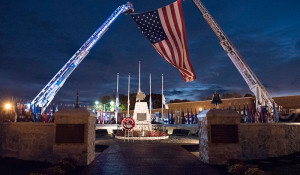 In preparation of the annual National Fallen Firefighters Memorial Service that is held in October in Emmitsburg, Maryland at the National Fire Academy, Emmitsburg’s fire personnel and volunteers fill multiple rolls year-round. For this year’s 33rd annual event held on the weekend of October 11 and 12, 2014, the folks at Vigilant Hose Company washed a huge U.S. flag then hung it to dry in the four-story stairwell at the station on West Main Street in Emmitsburg. Witnessing the flag, Wayne Powell, Executive Director of the National Fire Heritage Center (located within the Frederick County Fire and Rescue Museum on South Seton Avenue in Emmitsburg) said, “It was something to see.”

This same flag was later suspended between two ladder trucks, Emmitsburg’s and Walkersville’s, to create the gateway through which guests entered the memorial. This is just one example of support services conducted by the folks at the Vigilant Hose Company and the Frederick County Fire and Rescue Museum to help the U.S. Fire Service. This year, the lives of ninety-eight firefighters who died across the United States in the line of duty in 2013 and nine firefighters who died in previous years, were honored during the memorial services at the National Fire Academy.

More than 5,000 people, including Members of Congress, administration officials and other dignitaries, members of the fire service, as well as families, friends, and co-workers of the fallen firefighters attend this event. Vigilant Hose Company’s Chief, Frank Davis, said, “In 2001, the night before the memorial service, I received a telephone call at 6:00 p.m. requesting seventy-five fire trucks on the grounds of the Fire Academy for the service the next day to prepare for the president to attend. We were up all night, but we did it.” President George W. Bush attended this service in 2000 and 2001. It was during the service in 2001, held just a month after 9/11, that President George W. Bush announced that he had to leave early in order to make a special announcement. That evening, he announced from the White House that our country was going to war.

Emmitsburg resident, Dr. Bill Meredith, is credited with dubbing Emmitsburg with the nickname,  Firetown, USA. After retiring as a professor from Mount St. Mary’s College, Dr. Meredith played in a band called the Firetown Band. The name caught on. Emmitsburg certainly lives up to its nickname. As home to the National Fire Academy and the grounds where the Fallen Firefighters Memorial is located, Emmitsburg sees a steady stream of firefighters and fire personnel throughout town. Vigilant Hose Company has become the most visited firehouse in the United States, even surpassing Station #10 and Ladder #10 at Ground Zero in New York City.

The Frederick County Fire and Rescue Museum on South Seton Avenue in Emmitsburg is also the home to the National Fire Heritage Center. The Center houses many interesting artifacts from famous fires and data about the how firefighting has evolved over the years. Visitors may see fire station log books from Station #10 at Ground Zero on 9/11/2001, from Shanksville, Pennsylvania, where volunteers responded to a plane crash in a field on 9/11; and from Arlington County, Virginia, Engine Company 10, where volunteers watched as a plane crashed into the Pentagon on 9/11. These log books and many, many artifacts make a trip to this museum fascinating.

On Saturday, despite some rain, the Red Helmet Riders cruised through Emmitsburg on their motorcycles to show support for the fallen. Later that evening, a quick procession of bag pipe bands traveled from the Vigilant Hose Company to the town square and then filled the Ott House Pub. These same bag pipe brigades and drum units—comprised of musicians from all over the country—came together to provide poignant music during the emotional memorial service on Sunday.

At the memorial service, families of the fallen received flags that have flown over the U.S. Capitol and the National Fallen Firefighters Memorial. What an honor it is to serve as hosts to such an impactful event. In the thirty-three years that this service has been held, Emmitsburg has been the host location for all services, except one. In 2002, due to the large number of firefighters who perished 9/11/2001, the service was held in Washington, D.C.

For a complete list of fallen firefighters being honored and a widget to display their information on your website, along with Memorial Weekend streaming information, videos, photos, and satellite coordinates, go to www.live.firehero.org. For information about the Vigilant Hose Company, visit the station in person at 25 West Main Street in Emmitsburg or online at www.vhc6.com. For information about the National Fire Heritage Center, visit them in person on South Seton Avenue in Emmitsburg or online at www.thenfhc.org.