The American Legion Post 168 held its annual Memorial Day Ceremony on May 30, featuring special music, speakers, and the laying of the wreaths to remember the conflicts/wars where so many men and women gave their lives to ensure the freedoms we live with every day.

Volunteers placed flags in 14 cemeteries in our local area. The American Legion Post 168 is not notified when a Veteran is placed in one of the cemeteries. Please contact veteranrecognitionpost168md@gmail.com to let them know about your family Veteran.

By TheCatoctinBanner.com On October 28, 2015 · Add Comment · In Community News

On Wednesday, September 23, 2015, police officers representing law enforcement agencies throughout Maryland gathered in Gaithersburg to be recognized for their distinctive contributions to highway safety in Maryland.

The 2015 Maryland Traffic Safety Specialist (TSS) Awards Luncheon was presented at the Gaithersburg Marriott Washingtonian Center, and acknowledged law enforcement officers who have attained exceptional levels of experience, training, and proficiency in highway safety and traffic enforcement methods and procedures.

Thurmont Police Officer Jody A. Maybush was recognized as a 2015 TSS Award Recipient.

TSS Designations are awarded at three levels: TSS-I, TSS-II, and TSS-III, with each successive level reflecting increasing degrees of experience and specialized training in traffic safety. Levels II and III also require submission of a formal paper which must be reviewed and approved by the TSS Executive Committee.

“Clearly these award recipients epitomize the spirit of the TSS program,” said Thomas J. Gianni, chief of the Maryland Highway Safety Office. “Effective traffic enforcement translates to fewer crashes, fewer injuries, and fewer deaths on our roadways. Traffic safety is public safety, and we congratulate the awardees on their very distinguished achievement.”

We wear pink shirts, pink socks, pink ties, and pink ribbons and bows, in support of Breast Cancer research, but in Thurmont there is a six-pound, all-white Maltipoo named Marshmellow (shown right) that sports a pink tail to show her support.

Marshmellow’s owners, Bob and Betty Dewees of Thurmont, keep her tail pink in October for Breast Cancer Month. Marshmellow has had her tail dyed pink for the past five years. Betty re-dyes her tail when it starts to fade.

“When people see Marshmellow, they ask ‘Why is her tail pink?’” said Betty. “I reply: It’s pink for Breast Cancer Awareness.” 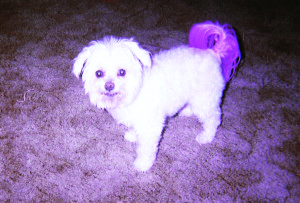 Mr. Earl A. Rice Jr. of Emmitsburg (pictured right) was presented with a Special 60-Year Award from the Maryland Masonic Grand Lodge. Brother Earl has been a member of Tyrian Lodge #205 Emmitsburg for sixty years; he was initiated on October 11, 1955.

On September 26, 2015, the Sons of the American Legion (SAL) Post 239 in Cascade held the fall Gun and Cash Bash on the grounds of Fort Ritchie. Of the 2,000 tickets sold, there were more than 700 people in attendance.

With the favorable weather, those present thoroughly enjoyed the fundraising festivities. SAL’s Fisher House, Person(s) in Need Fund, and Cascade School’s Christmas Party will be prioritized in receiving the benefit proceeds.

Mr. Frank Sheiv, representative of Fisher House, spoke briefly about the importance of the contribution to this cause. A total of $10,000 has been donated to Fisher House from Cascade SAL from their last four events.

The attendees enjoyed plenty of pulled pork and beef, and many more picnic items to satisfy the hungry. Heartfelt thanks go out to all who endeavored to make this day a big success—it takes a lot of people!

On Thursday, September 24, 2015, Grand Master Kenneth S. Wyvill Jr. of the Maryland Grand Lodge and his Grand Line traveled to Tyrian Lodge 205 in Emmitsburg for a visitation and to present an award to Past Master Donald Stultz. Stultz has been teaching ritual and floorwork for Tyrian Lodge 205 for more than thirty-five years and rarely misses a rehearsal or meeting. 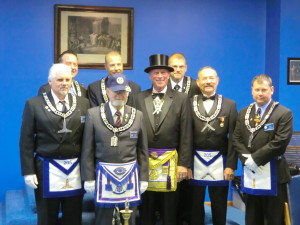 The 2015 White House Christmas ornament honors the administration of Calvin Coolidge, who served as the thirtieth president of the United States, from 1923 to 1929. A depiction of the first National Christmas tree, crafted from shiny brass and plated with nickel and 24k gold, is illuminated from within and hung with ornaments representing the events of Coolidge’s unique life and presidency.

The sweeping banner anchoring the tree reads “White House Christmas 2015” on the front and “1923 Calvin Coolidge 1929” on the back. Tucked discretely on the back of the ornament is the switch for the new LED light feature included in this year’s design.

The White House Ornaments are a fundraiser of the Catoctin Area Civitan Club, who will use the proceeds for research on Alzheimer’s, Parkinson’s, Autism Spectrum Disorders, and other syndromes of the brain, supporting people in our area who have developmental disabilities and providing support to meet other needs in our community.

Attend a Girl Scouts meeting to learn more about Girl Scouts in your community and how you can be involved. Information meetings will be held on November 8, 2015, at 1:30 p.m. at the Thurmont Regional Library, located on Moser Road in Thurmont, and on November 12, 2015, at 6:00 p.m. at Glade United Church of Christ, located at 21 Fulton Avenue in Walkersville, Maryland.

Girls and their families will learn about opportunities for girls to be part of the largest girl organization, and how girls can explore the outdoors, develop strong values, make friends, have fun, and much more.

For more information and to RSVP, contact Patty Green at maizemeadow@gmail.com or call 301-898-3629.

The Thurmont Spirit Show Choir (TSSC) is gearing up for their big competition in the “Big Apple” in April 2016. They are in the midst of their Catoctin Popcorn fundraiser, which features various flavors of gourmet popcorn and Bavarian style nuts. These items make fantastic holiday gift ideas. Please see a Show Choir member to order for yourself or someone special. You may also call Marcie Dorcus at 301-748-7552. They will be marketing this fundraiser at the Thurmont Fall Art and Wine walk on November 13, 2015, from 6:00-8:00 p.m.

Completed Emmitsburg Trail Has People on the Move Through Town

By TheCatoctinBanner.com On August 27, 2015 · Add Comment · In Community News

Emmitsburg Commissioner Tim O’Donnell was recently biking along the Emmitsburg Multi-User Trails, something he does multiple times a week. Whenever he meets someone on the trail whom he doesn’t know, he “puts on his commissioner hat” and stops to talk to them about where they are from and how they like the town. On this particular trip, he met people from Towson, Westminster, Baltimore City, and Freeland.

Austin Steo, with the Trail Conservancy, does the same thing when he uses the trail. “I have not heard anyone say a single, negative thing about the trail,” he said.

While it’s hard to determine how many people are using the trail, it gets hundreds of people looking at the map on the MTB Project website. It is ranked the No. 6 trail in Central Maryland and the No. 4 trail in Maryland.

“You can also tell by the wear and tear on the trail how much it’s being used,” said O’Donnell.

The Emmitsburg Multi-User Trails were dedicated on June 28, 2015. Years in the making, it came about with the help of a $100,000 grant from the Trail Conservancy and a $300,000 matching grant from Single Track Futures through the Maryland State Highway Administration and the Recreational Trail Program.

“The goal was for the trail to cost the town as little as possible,” O’Donnell said. He estimates that town staff put in around forty hours to review paperwork, give advice, and answer questions.

The trail offers terrain for beginners through advanced mountain bikers and hikers. It is hilly terrain with rocks, fields, and woods. The trails total 16.2 miles, with 7.2 miles of intermediate and advanced trail. Bikers can bike shorter sections because the trail is essentially put together in connected loops, or they can bike all of the loops multiple times for a longer ride.

“Don’t let the mileage fool you; the challenging, steep terrain packs more challenge into half the mileage of trail systems further east,” according to the MTB Project website.

The trails will only be open on Sundays during hunting season. When this happens, signs will be posted.

Other signage will probably be the next step in improving the trails. O’Donnell says that they hope in the near future to put up color-coded signage to help people stay on the trail they want to bike.

The trails are already helping promote tourism in town. O’Donnell says that a lot of time when bikers stop to eat, get gas, or shop in Emmitsburg, he hears about it from the business owner.

“They are using the facilities in town, which is what we want to happen,” O’Donnell said.

The trails took years to reach completion. It began about ten years ago when a Trail Task Force was formed that included members of the community, Mount St. Mary’s University, and town government. With a positive report, the project began moving forward.

“It’s a good project that allows people to enjoy our natural resources, and it shows that we are good stewards of the property,” O’Donnell said.

Steo said that he would like to see the town connect the trails to the town at Community Park. That way, bikers can park in town, get right on the trails, and when they return ready to eat or get a drink, they are already in town.

“Connection to the town at the park is key to the trails,” Steo said. “Very few places have that kind of opportunity.”

You can start the intermediate/advanced trail at Rainbow Lake. The beginner trail starts at the Annandale Road trailhead.